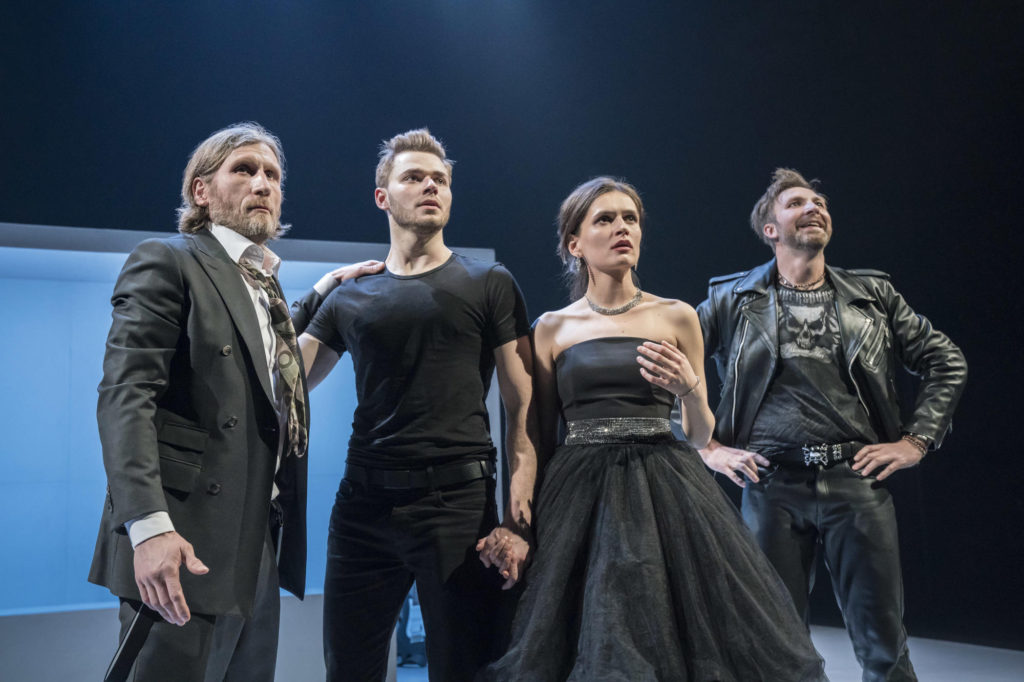 The Night of the Burning Pestle

“Nick Ormerod has done a fair bit to bring the production to a modern audience, but the plot and original satire still stand”

There’s that idea of theatre, that people who don’t go to the theatre think of when they think of theatre – in short, it’s pretentious, abstract and incomprehensible. Or it’s Shakespeare, but, like, one of the ones no-one knows. And in truth, even to the seasoned theatre goer, facing such an evening can be equally nightmarish.

Cheek By Jowl’s ‘The Knight of the Burning Pestle’ begins with such a nightmare: the set (Nick Ormerod) consists solely of a white monolith centre-stage, from behind which the cast, dressed entirely in monochrome (Bilan Valentina), slowly emerges, to the long, monotone burr of a cello (Pavel Akimkin).

A man’s bust (Kirill Sbitnev), projected on to the monolith, begins a booming monologue in opaque seventeenth century language as the cast moves abstractly around the stage. The first scene is more of the same – you just about get the gist, but, being in Russian it grows quickly tiresome having to crane your head to read the surtitles and untangle the meaning, and occasionally flick a glance down to see what’s actually happening on stage. Five minutes in, however, we’re interrupted by a man in his fifties from the second row (Alexander Feklistov) and his wife (Agrippina Steklova) who clamber on stage, to report that they don’t understand what’s happening, that maybe the audience would prefer a different kind of story. The two decide that instead there should be a story about a knight! Who kills a lion! With a Pestle! And they have just the man for the job- their man-child nephew Rafe (Nazar Safonov), also sitting in the audience who eagerly runs to join them. Thereafter continues a strange hostage situation, where the cast are trying desperately to continue on with their play whilst incorporating Rafe’s knight, and placating this eccentric- and very vocal couple who have decided to sit on stage for the rest of the performance.

Having been written in 1607, director Nick Ormerod has done a fair bit to bring the production to a modern audience, but the plot and original satire still stand, and it’s as relevant now as it ever it was. Rafe’s ridiculous ‘knight’s adventure’ storyline along with his hobby horse ‘steed’ and the big orchestral music accompanying him, in contrast to the drab, solemnity of the ‘real’ play, reminds us that sometimes all we want is a big adventure, a happy ending and a song and dance. And that’s exactly what we get – dance and all (as choreographed by Irina Kashuba).

Whilst it seems much of the translation is condensed so as to avoid missing the action on stage, the absurd comedy of it all still comes across. A seventeenth century love triangle, a medieval knight’s adventure, and a pushy old Russian couple may seem an unlikely combination, but it’s a winning one, and a must-see.

The Night of the Burning Pestle