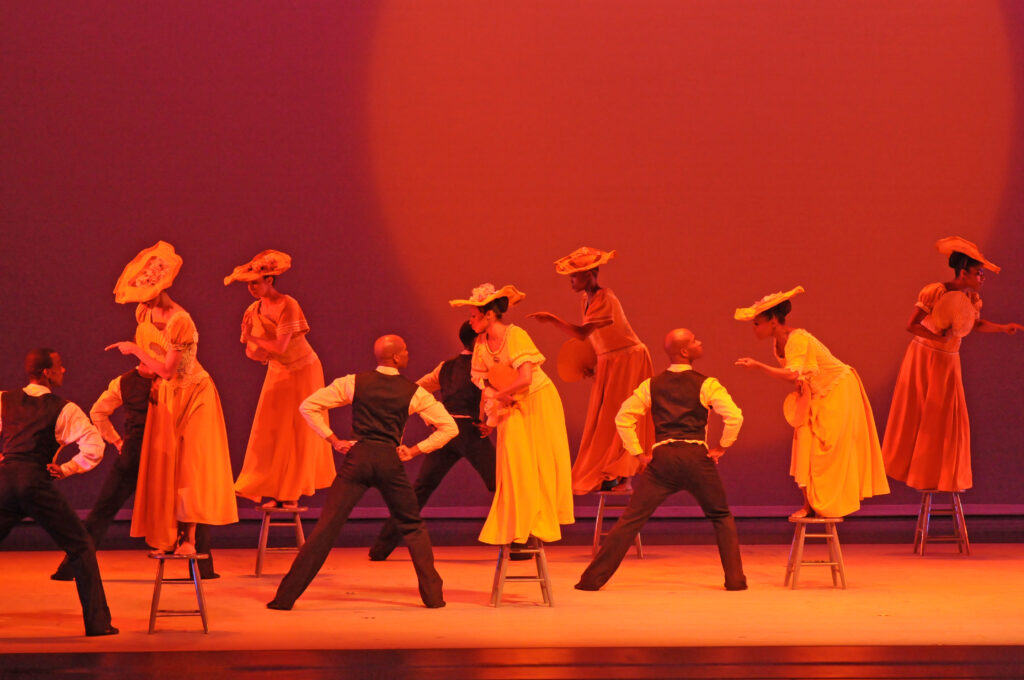 “Lazarus is a breathtaking new addition”

Alvin Ailey set up the company that would become the Alvin Ailey Dance Theater in 1958. He was taught by the renowned choreographer Lester Horton, and carried on Horton’s vision of an integrationist modern dance form that included elements of African, Asian and Native American movement styles. Alvin Ailey Dance Theater celebrated it’s 60th anniversary last year and is still bringing Ailey’s unique vision to the world’s stages; now encompassing contemporary hip-hop culture and rhythms in the company’s continued mission to evoke the emotional and physical drama of African American experience.

Lazarus was choreographed by acclaimed hip hop choreographer Rennie Harris and had its premiere as part of the 60th anniversary celebrations. It is an extraordinary work, with the visceral power of a dream, and moves, quite literally, from the dark to the light, in its first and second acts. The soundscape is a work of art in itself: a collage of music and text built from gospel, blues, house, and the words of Ailey himself. Act One is set on an almost completely dark stage; figures appear against the blackness, semi-illuminated. Often, when they are fully lit, it is in the aggressive light of a searchlight and against the barking of dogs, or the beating of a heart. Harris doesn’t spare us; we see torture and pain, and in one unbearable and unforgettable stage picture, bodies in the unmistakable twisting of the lynched. The dancers run, twist, bow down under burdens and break, in expressions of human, and specifically African American, suffering. But yet Harris also uses them in an abstract way too – they become cornfields, rolling mist and instruments of pure expression. It is mesmerising. The second act begins in the same language but then erupts into fierce, proud, sexy joy. It is club culture mixed with the pride of African royalty (referenced in the costumes), ‘so people can see how beautiful they are’ to use the words of Ailey himself. The very last sound of the piece is the exhalation of a single dancer. And it seems everything is contained in that breath – exhaustion, completion and, ultimately, humanity.

Revelations is the second piece of the evening, and was choreographed by Ailey himself, in 1960, to pay homage to and reflect the cultural heritage of the African American, which Ailey considered to be one of America’s richest treasures. The piece is rich in religious feeling and symbolism, powered by gospels and spirituals, and has a three movement structure – Pilgrim of Sorrow, Take Me to the Water and Move, Members, Move – which operates in the manner of a concerto. Within each movement, there are set pieces – sometimes for a single dancer, sometimes a duet, a trio or an ensemble – separated by a brief blackout. The opening ensemble piece is stunning; the dancers all in earth tones and reaching, reaching for the light with open palms and strength in hips and thighs. None of the other pieces quite matched this one in terms of visual and emotional power, and the use of props in two of the later pieces detracted from the feeling of spiritual strength and connection generated by the skill of the dancers. The final piece in particular, in which the women danced with fans and hats and perched on stools, with the men weaving in between, felt like the ‘bring the house down’ number from a big musical and took away from the earlier meditations, and indeed, from the power of the evening as a whole. It also felt very wrong to have two intervals; Lazarus would have been much better served being programmed without an interval between the first and second act.

In sum, despite a couple of minor caveats, Alvin Ailey American Dance Theater is still a force to be reckoned with, and Rennie Harris’ Lazarus is a breathtaking new addition to its repertoire. We’re lucky to have this exceptional company in town; don’t miss out.