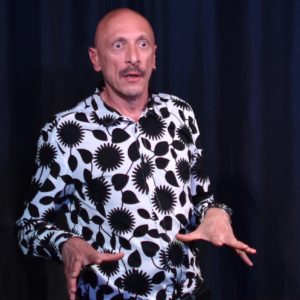 Don’t Frighten the Straights! is a storytelling showcase performed by BBC comedy and drama producer Turan Ali. Ali has a repertoire of around 40 outrageous stories but in his newest production only recounts a select four (plus a bonus encore micro-story).

The audience hears all about a romp with a hunky maybe-Nazi in the Ukraine, the fulfilment of a late friend Andrew’s wishes to have his ashes scattered in the Kitchen Department of Edinburgh’s John Lewis, an eight-year battle of wits with a homophobic father-in-law and a frightened Police Constable from Yorkshire being sent to live with a gay couple for the weekend. Ali declares that his show aims to provide an “antidote to the new gay stereotypes” by sharing stories from real gay people and his own life.

Ali is a confident storyteller and his voice is very soothing. The atmosphere and delivery are both very warm and personal as if a friend is sharing their weekend revelry over a cup of tea. At times, however, this can mean that there is a lack of oomph and excitement and jokes consistently fail to land with their full potential. The four tales are not risqué enough to be shocking and dirtier turns are shrouded entirely in innuendo.

The show begins with an assertion that the lives of gay men “are not all like Ru Paul’s Drag Race or Queer Eye for the Straight Guy” before the audience is then entertained with stories rife with stereotypes (and drag!) from his flamboyant friend Malcolm to Grindr sexcapades. He also proclaims that he is fed up of seeing LGBT+ stories in the media end in abject tragedy but none of his stories end particularly happily at all. It is thus not completely believable that there is a purpose to these stories other than to get a laugh.

There were some serious moments where Ali would have benefited from lingering such as when he notes that the Police Constable made sure to pack antiseptic wipes when staying with two homosexual men. Another shocking anecdote is Andrew’s doctor implying that his terminal cancer of the rectum was a punishment for his sexual activity.

These snippets provide a truly touching insight into the gay experience, but Ali is quick to move on or play such occurrences for laughs. Talking about Andrew is the most moving and gripping part of the performance and this is then followed by the production’s strongest story which demonstrates that Ali is capable of fusing serious and comedy in a highly successful way. More of this would be wonderfully elevating.

There is some brief audience participation in which a specifically male volunteer comes down and rips off Ali’s trousers to reveal a kilt that helps set Scottish scene of the last two stories. This and a sporran are the only props used. The lighting only changes significantly between stories where the stage goes completely black and snippets from Ruth Wallis’ song Queer Things play.

Don’t Frighten the Straights! is an amusing show but Ali is too concerned with not making the audience uncomfortable that he fails to spotlight the real stories of the gay community as he promises.