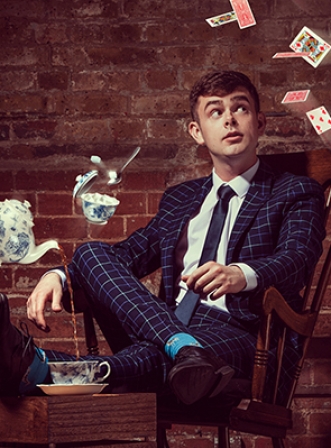 “an impressive display of the improbable generously peppered with enthusiastic banter”

Tom Brace is a cheeky chappie with a glint in his eye, and a pocketful of wholesome, homespun tricks. On this particular evening it’s unfortunate that half of the already intimate audience is made up of unwilling sixth-formers. But Mr Brace remains unperturbed, and does his utmost to win them over with an impressive display of the improbable generously peppered with enthusiastic banter. Starting strong with the audience estimating the price of his dapper chequer jacket, lo and behold, the tag still attached shows the exact amount we guessed, down to the penny. The evening continues in a similar vein of low-production, and expert execution.

As might be expected, the chilly British audience are rather hard to thaw, and Brace does well to make light of their reluctance to join in. But in doing so he’s a little overly self-deprecating. It’s a fine line, but after a while, best not to repeatedly tell the audience you know they don’t want to be there. That being said, the smaller members of the audience could not have been more delighted with both the showcase of skill and Brace’s friendly chat. And once an audience member, grown or growing, is finally cajoled on to the stage, Brace does well to utilise their uneasiness and turn it into part of the act.

Unlike a lot of children’s shows, this is ideal for both parents and off-spring alike, and the home-made nature of the production (a tent making do as a ‘crystal dome’, or ‘Who wants to be a millionaire…shortbread owner’ for example) does well to put the audience at ease. It’s not really for adults unaccompanied by children, but that being said, it’s only an hour long, so there’s no harm done if you’re in the neighbourhood and fancy a bit of good, clean fun.