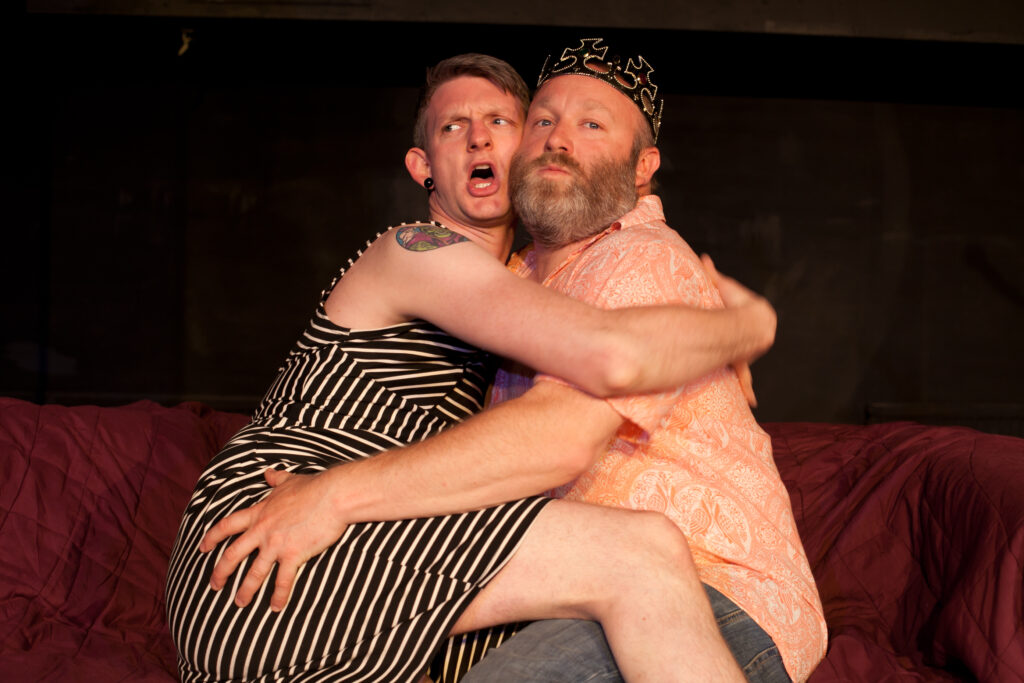 The Six Wives on Henry VIII

The Six Wives of Henry VIII is the very first show from theatre group Living Spit, consisting of comic actors Howard Coggins and Stu McLoughlin. First premiering in 2012, Coggins and McLoughlin have since written and performed a further fourteen shows, and the pair’s most recent run of The Six Wives of Henry VIII (directed by Craig Edwards) at the iconic King’s Head Theatre marks their first London tour.

Coggins and McLoughlin admit early on that their show is in fact a rather elaborate response to a devastatingly harsh one-star review criticising the duo’s lack of commitment to historical accuracy. It helps, of course, that Coggins also looks remarkedly like the infamous Tudor monarch Henry VIII who he plays for most of the performance. McLoughlin, on the other hand, plays pretty much every other character from all six of Henry’s ill-fated wives to the Archbishop of Canterbury Thomas Cranmer as well as many more.

With admittedly very little research informing the script, the audience is taken on a whistle stop tour of Henry’s life, meeting his unfortunate queens along the way. Musical interludes and reality TV show parodies abound, this rather silly play demonstrates just how fun (and funny) history can be if you just fill in the blanks.

The performance takes a little while to get going but about halfway through, the actors seem to find their feet and the play whips by at a much more engaging rate. This is then unfortunately punctuated by a scene in which Coggins and McLoughlin pretend to have a massive falling out which leaves the former to act out Henry’s conversation with his final wife Catherine Parr alone. There is a playful rivalry established in the duo’s dynamic early on, but this faux argument goes frustratingly too far in upsetting the action on stage.

One does have to admire how much Coggins and McLoughlin attempt to do in a show that is little over an hour. The songs are not particularly memorable, but they are a fun addition to the performance and split up the scenes nicely. The strongest song is performed by Anne of Cleves and Henry VIII in which the two dance robotically as colourful lights flash around them as if they are in a techno nightclub.

The stage (Fiona Trim) consists of a sofa (which doubles as a bed in some scenes), a throne and a small area for the musical performances where two guitars and a ukulele hang on stands. There is some amusing prop work which demonstrates the pair’s wit. Particularly notable is the decision to have Anne Boleyn being originally played by a Barbie doll which Coggins passionately kisses, and a homemade lie detector fashioned from a bicycle helmet and pliers used on Catherine Howard to prove her adulterous ways.

The lighting (Octavia Penes) is fairly tight. For example, in a dream sequence with Henry VII’s ghost, the whole stage is lit up in red at the exact moment McLoughlin clicks his fingers. The costumes are pretty basic – a new character most often signalled by a different hat – but this is understandable considering the amount of changes McLoughlin has to make in quick succession.

The Six Wives of Henry VIII has a lot of spirit and is sure to have the audience laughing with its self-referential and anachronistic humour. However, some more focus on Henry’s fascinating love life rather than the fake drama between McLoughlin and Coggins will no doubt help to better engage the audience with the farcical world of Tudor Britain and its iconic King.

The Six Wives on Henry VIII