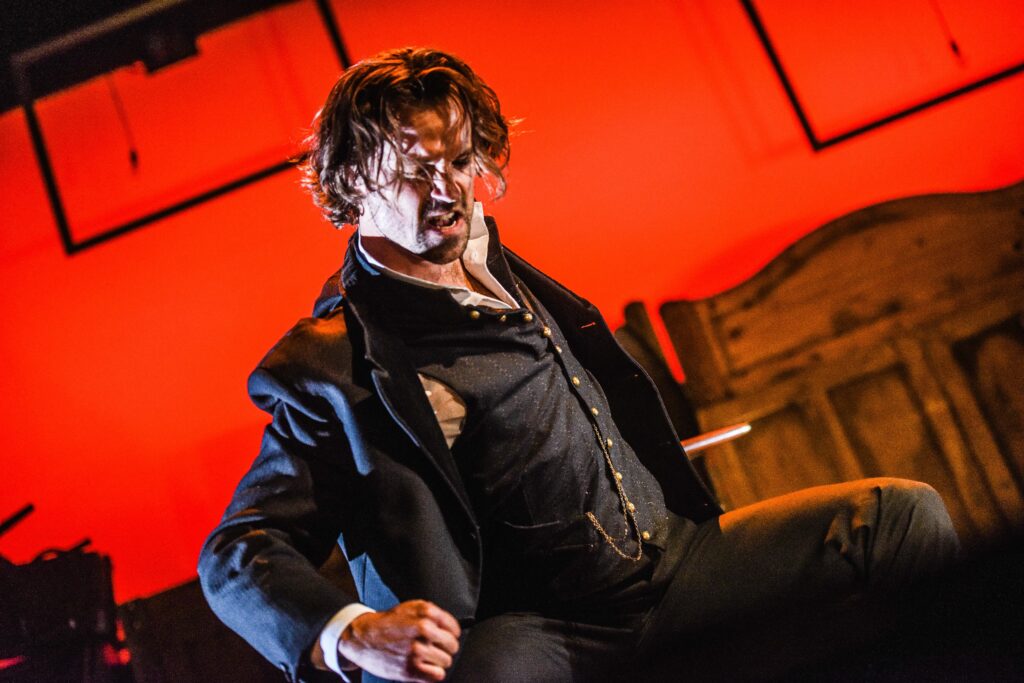 The theatrical flame was burning brightly again at Bracknell’s South Hill Park last night. Their Wilde Theatre reopened for one night only for a stylish and thrilling live and live-streamed performance of ‘The Strange Case of Dr Jekyll & Mr Hyde’.

This revival is the work of resident company, Blackeyed Theatre, and was written by its excellent Director, Nick Lane. The recording is also to be made available on demand to schools with full support materials via blackeyedtheatre.co.uk.

Robert Stevenson’s 100 page novella has been adapted into over 120 films and plays. Over 100 years since it was written, it continues to inspire new creativity and to feature on school syllabuses. Put out of your head the schlock horror of some of those earlier film versions. This is a taut psychological drama that is both true to the period whilst remaining vivid and accessible to contemporary viewers.

The show opens as the lights go up on Victoria Spearing’s cleverly expressive set. The back wall is washed in red light and a jumble of piled up cupboards functions equally well as the laboratory where Dr Jekyll carries out his wild experiments or the morgue where Mr Hyde’s victims are inspected.

Some elegantly spare writing for piano by Tristan Parkes sets the mood in the first few moments. He was musical director for both the Beijing and London Olympic Games and his fine score is consistently satisfying. New to the show is the impressive Blake Kubena as both Jekyll and Hyde. He was well-cast, both physically and for his nuanced interpretation. He cuts quite a thrilling dash as the ‘twisted’ scientist who transforms in a moment into the utterly amoral Hyde. The story’s black and white moral core is plain.

Zach Lee nicely reprised his role as lawyer Utterson. His ‘period’ clipped delivery and precise movements were shared by other supporting characters, in particular Ashley Sean-Cook as Lanyon who also has some touching scenes with Paige Round as his wife. She sang some delightful songs and like all the other members of the cast seemed to inhabit her several roles with conviction.

Jekyll’s Faustian pact must damn him forever. But will his friends be drawn in or abandon him as his life unravels? That is the heart of this exciting and recommended story.

Click here for planned tour dates for the show.