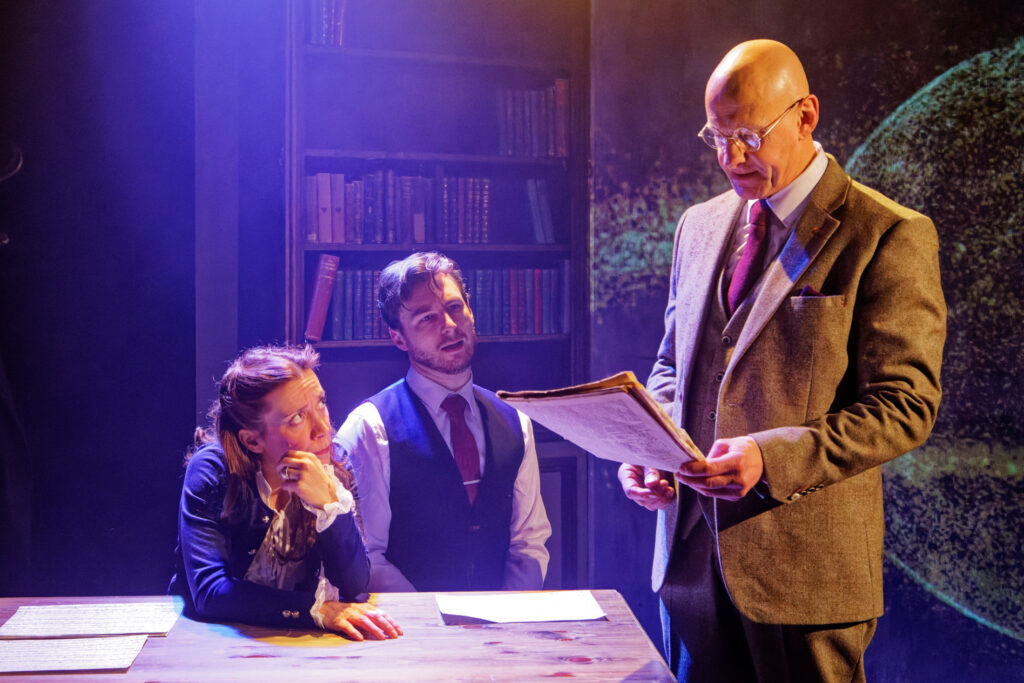 “Wynn-Davies’ performance is energetic, dynamic, forceful and totally engaging throughout”

This ambitious play, written and directed by Ross McGregor, is the first part of a duology The Dyer’s Hand produced by Arrows & Traps Theatre Company. The title is taken from a Shakespeare sonnet and used by Cecilia Payne in her memoirs, and the two individual but interlinked plays are being performed on alternate nights.

The set (Designer Odin Corie) is a simple studio containing a large desk. Some sheets of manuscript paper, a music stand, and a lone violin indicate that this is composer Gustav Holst’s study. On the other side of the stage is the desk of schoolgirl Cecilia Payne. Music on one side, science on the other and a large void lies in between. And this is to be the crux of the matter: what is more important, music or science?

Flashbacks in the narrative are indicated with titles projected onto a screen in the style of a silent movie whilst figures from the past appear behind the gauze.

Ever present on stage is Gustav Holst (Toby Wynn-Davies) and Wynn-Davies’ performance is energetic, dynamic, forceful and totally engaging throughout. If I wondered whether a story about Holst could carry the weight of an evening’s entertainment, Wynn-Davies wins me over. We see Holst’s insecurities caused by the abuse of a domineering father, his physical pain from neuritis, and the frustration caused by his poor sight. And then we become engaged in the strength of Holst’s conviction in education – not just for the privileged few but for ordinary working people, his love for Isobel despite his innate shyness, and most of all his absorbing passion for the music itself.

McGregor’s play alternates scenes of dialogue with quasi-balletic interludes to the music of Holst’s Planets (Sound Designer Kristina Kapilin). This brave but ingenious technique allows us to hear the music evolving inside Holst’s head and provides us with absorbing ensemble scenes involving movement, mime and physical theatre. The most successful of these are a nightmare in which Holst is berated by his father and stepmother to the rhythms of Mars, the Bringer of War; and the culmination of the evening in which a solo Holst, totally enraptured by his music, breaks down into both laughter and tears as he conducts the theme of Jupiter, the Bringer of Jollity. Once again, Wynn-Davies’ performance is extraordinary.

A crucial element of this five-star production is the beautiful performance by Laurel Marks as Cecilia Payne. We are going to see much more of this character in the second play but here she is introduced as a friendless and troubled schoolgirl but possessing an astute mind and extraordinary intelligence. Marks is totally convincing as she explains ideas and concepts far above that of an average teenager and the mutual understanding that develops between Holst and Payne is the thread that holds the play together.

One memorable scene in which Holst justifies the place of music in a school’s curriculum should be recorded and sent to school governors across the land. It is a coherent piece of writing, passionately performed and totally convincing in its argument.

The Music In The Spheres is part one of Arrows & Traps new repertory season: The Dyer’s Hand

Reviewed at this venue last year: