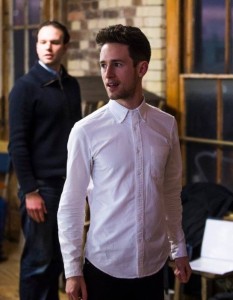 After our recent visit to see Nell Gwynn, thespyinthestalls gave Jessica Swale’s wonderful play a four star review. We also noticed amongst a very talented company, a charming actor in the ensemble who immediately drew our attention due to his engaging stage presence. After a bit of interval investigation (technically known as ‘looking in the programme‘) we found out this was Matthew Durkan, appearing in his West End debut. We are pleased to say that Matthew kindly agreed for us to speak to him, and become our inaugural interviewee.

You left a career in accounting to become an actor, what prompted you to do that?

I went down a very academic route after finishing my A Levels and chose to study Maths at University. A lot of Accountancy firms were offering great graduate positions so I decided to give it a go. I was about a year into my three years of training when I began to doubt it as a career path, so I took a short course in acting at Central School of Speech & Drama – evenings & weekends – and got involved in London’s Fringe theatre scene. I was lucky enough to churn out quite a lot of varied work over the next two years whilst still working as an accountant in the day. Then, once chartered, I left my firm and decided to give acting a go full time. So far so good!

How did you get the role in Nell Gwynn?

I was called in to audition when working out in Cardiff at the Sherman over Christmas. I’d sent off a couple of sung recordings and was invited to come and meet the Casting Director and Assistant Director in London. So, on the Friday before Christmas, I hopped on a train to do a little ditty and a few scenes and was offered the job the following Monday.

8 shows a week for 10 weeks must be pretty hectic, what do you do to unwind and relax?

I’ve spent a lot of time at the cinema recently and BBC are churning out some high quality dramas so they have kept me occupied. That and understudy rehearsals at the minute! But ideally, a game of tennis. 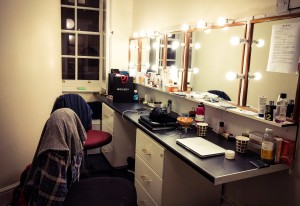 How are you finding life in London?

Great. It’s novel to be in London for work and be surrounded by loved ones & friends, as my two previous jobs have been regionally based. I’m also thoroughly enjoying being around so many great coffee places and burger joints!

The show is getting some great reviews, but Milly the dog (named Oliver Cromwell in the play) seems to steal the limelight in some of them from the human cast. Is she a bit of a diva like Nessie, who played Chowsie in Gypsy at The Savoy, was rumoured to be?

Not at all, she’s divine and melts everyone’s hearts.

Does reading reviews in the press affect you?

I enjoy reading them, to be honest. I like seeing how a play is received by someone who is not involved with it. You have to take some with a pinch of salt too, I suppose. Some plays are very divisive and if I had listened to the one star reviews of Mr. Burns, for example, I wouldn’t have experienced the wonders of it.

What’s the hardest part of your job on Nell Gwynn?

Covering the four characters I am understudying. We are quite an active ensemble anyway so remembering four more characters’ tracks will be a challenge. 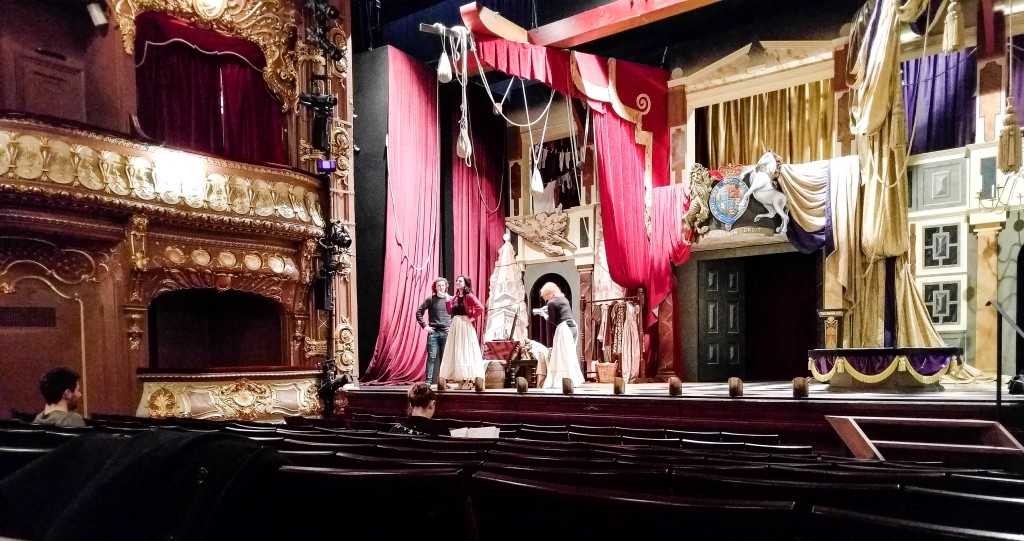 Understudy rehearsals at the Apollo

Some of the costumes in NG are ‘interesting’ to say the least, are they easy to wear?

The wigs provide a definite itch, and it’s the first time I’ve worn a skirt – and stockings – but they are a hoot. Hugh (designer, Hugh Durrant) has done an amazing job matching them with the flamboyant nature of the piece. And massive congratulations to him on his Olivier nod!

Are you aware of the audience when you’re on stage and have you witnessed any bad behaviour in the auditorium?

I think, as an actor, you have to be aware of them – particularly with comedy. Laughs, applause come at different points every night so you have to be alert to it. Bad behaviour…people climbing onto the stage to try and steal Milly? Does that count? (I think Matthew is joking about this….!?) 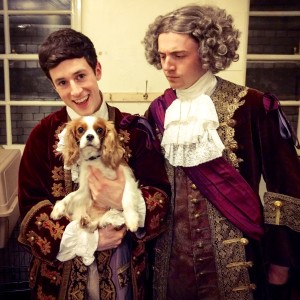 How would you sum up Nell Gwynn in three words to someone who hasn’t seen it?

Nell Gwynn is for a limited season. Do you have anything lined up for when it’s over?

Nothing as yet, but there’s a couple of things I’ve got my eye on. Time will tell.

If you could choose anything, what would be your dream lead role?

Tough one. I’d love to have a bash at Richard II. And I like new writing so I’d love to originate a role in something.

And what’s your all time favourite musical or play?

A View from the Bridge at the Young Vic left a lasting impression on me. But I think Mr. Burns at the Almeida Theatre just pips it.

And if you could meet any actor or musician, dead or alive, who would it be?

Ray Charles. The man is a genius.

So, what would be your ideal night out when the run ends?

A night in Paris for dinner, drinks and late night chats.

Matthew, thank you so much for speaking to us today, you have been charming. We predict great things are ahead for you. Enjoy the rest of the run, and good luck to everyone at Nell Gwynn on your Olivier Award 2016 nominations.

Nell Gwynn is running at the Apollo theatre on Shaftesbury Avenue for a limited season until 30th April, click on the logo below to go to the Nimax booking site. 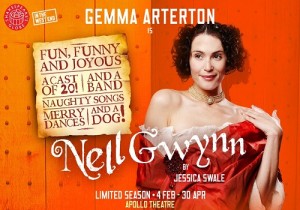 Find him on Spotlight by clicking the logo below. 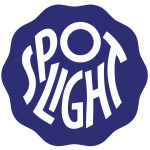