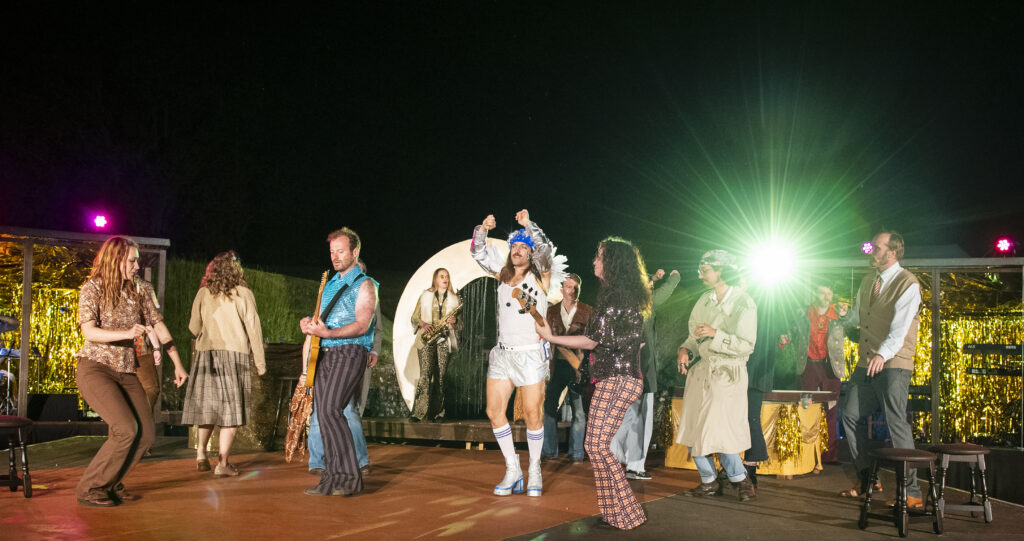 OVO at the Roman Theatre of Verulamium

The English summer outdoor theatrical season is amongst us and there can be few sites more delightful for enjoying an evening’s entertainment than the Roman Theatre of Verulamium (St Albans). The stage is beautifully lit (Mattis Larsen) in reds and blues as the evening draws in, and head mics are worn by all performers (sound by Michael Bird) that removes the necessary but sometimes irritating shoutiness of outdoor projection. A Midsummer Night’s Dream is, for obvious reasons, a summer favourite and there is a huge amount of fun to be had in this production directed by Adam Nichols and Matt Strachan – including an opportunity for a legitimate stage invasion – but this is not one for a Shakespeare purist. With a large percentage of the original dialogue paraphrased into modern(-ish) language, and much of the plot condensed and developed, it is surprising that there is no ‘adapted by’ credit which is surely merited.

A gender-ambiguous Puck (Guido Garcia Lueches) is barely dressed in a low-cut singlet, the shortest of shorts and the highest of platform boots (Costumes Emma Lyth) – half Eurovision, half Eurotrash. Leaving the club singing Abba’s Gimme Gimme Gimme (A Man after Midnight), Puck draws the locals into an imaginary Disco Land where the fairy magic is to take place. Verses of pop song are interspersed with spoken Shakespearean text whilst the would-be young lovers show us their moves (Choreography Sundeep Saini).

Lyle Fulton plays a rather pathetic but ultimately endearing Lysander who with a guitar in hand and a song for every occasion wins us over by his appealing nature. Emilia Harrild is a feisty Hermia – little but fierce – who endures the worst insult when described as a “Yorkshire teabag”. Charlie Clee plays Demetrius inexplicably as a sullen and rather unattractive suitor; an approach which is explained by a striking late plot twist. Eloise Westwood as the naive Helena provides the performance of the evening. Even before her moving last solo song, her star quality shines out amidst the pantomime going on around her.

In the traditional manner, the roles of Theseus (Ben Whitehead) and Hippolyta (Emma Wright) are doubled with those of Oberon and Titania. Emma Wright shows her stage versatility with an impressive transformation from down-trodden housewife to spectacular dancing queen. I can’t relax into Oberon’s “luurrv” style of delivery but many around me enjoy his fairy meddling, “Get ready to party, and don’t Puck it up”.

In the most radical change of the production, the hempen homespun have ambitions to become a pop band rather than to stage a play, so Pyramus and Thisbe does not get an airing. They are transformed into disco fairies and Bottom (Daniel Hall) becomes a Saturday Night Fever dance icon (white suit, gold medallion, black quiff) rather than the traditional ass.

In the final scene, back in the club, the band The Mechanicals perform a non-stop 70s megamix medley (Musical Director Tom Cagnoni) and the full cast dance out the night. It isn’t strictly Shakespeare but it’s a fine evening’s entertainment in the open air.

OVO at the Roman Theatre of Verulamium until 11th June 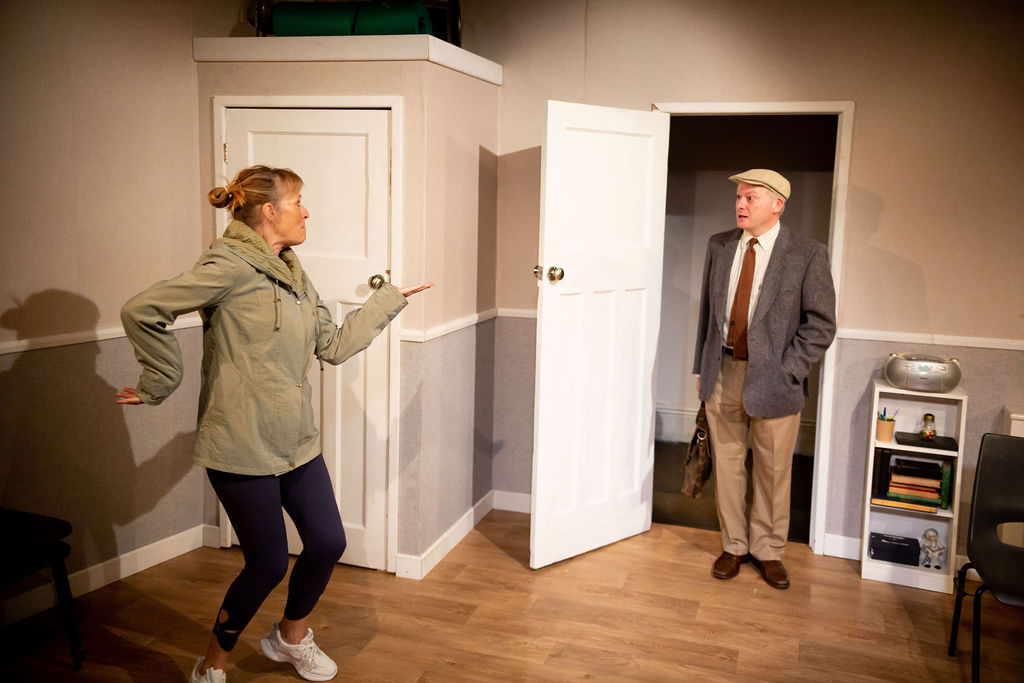 The delightfully intimate Jack Studio Theatre reopens in front of a socially-distanced audience with this charming two-hander by Stewart Pringle. Last seen live-streamed from the Maltings Theatre, the production is directed by Matthew Parker. Jilly Bond reprises her role as Denise, the sinewy Zumba teacher, who meets weekly with retired widower Harry played by Timothy Harker.

Our scene is one end of the Billingham Temperance Hall with its stark entrance, a stack of black plastic chairs and the ubiquitous trestle table at centre stage. There is just enough clutter in and on top of a cupboard to represent the paraphernalia that such community spaces attract and an appropriate selection of posters (almost certainly out-of-date) on the community noticeboard.

Numerous mini-scenes flash by, one week apart. Harry’s committee meeting finishes before Denise’s Zumba class starts and in the few minutes’ hiatus, beginning with a misunderstanding, we see their friendship – if not a relationship – develop and blossom. There is small talk and the sharing of sandwiches, and little by little personal information leaks out. But can we believe these short meetings can develop into romance? Denise talks of the steamy scenes she is reading but she does not follow such talk into action. Harry is too content with his mundane unchanging routine to risk the turmoil of change.

Harker excels as the fastidious Harry, with his shuffling of papers and bumbling manner, in a tweed jacket and sleeveless woollen sweater, and a flat cap to remind us of his Yorkshire-ness. When appointed Chairman to his board he buys his own gavel on eBay but sheepishly admits he has never had to use it in a meeting. But he mimes with it when no-one is looking.

Denise is brash, and confident enough to run both an exercise class and a book club, but she is unable to confront a man who makes comments on her eating a banana in the library.

The well-rehearsed movement between the couple in the confined space is slick and easy. Entrances and exits through the one small door are timed perfectly. Only when the couple attempt to sit on the table does the fluency stutter; Harker (or Harry) can’t hide his doubts that the trestle is sufficiently stable.

There is no full blackout between scenes so that we can see the reset for the next meeting. Tedium from the repetitive actions of stacking and restacking the chairs and the repositioning of the trestle table is narrowly avoided. Only the continuous opening and closing of Harry’s briefcase becomes a bugbear. And it jars when the trestle is incongruously left standing in some later scenes as the premise of the play is surely that the table has to be moved for Denise’s Zumba class.

Both Bond and Harker play the comedy gently and convincingly. It is light and comfortable viewing – the potential source for a Sunday evening TV sit-com – but the personal stories lack depth and, whilst we learn that even older people can get muddled in their efforts to forge relationships, the journey our couple make is not long enough.