We live in a time of fake news. That much is true. That we have irreversibly entered an era in which Twitter feeds travel faster than news bulletins is undoubted. What is less certain is the public’s ability to detect fake news. Guesses have taken over certainties, and the low-cost, low quality, easy access of information is all too easy to swallow. Rumour sticks. Truth is less durable. It makes you wonder how a press office can survive in today’s worlds. How does the real news stand a chance?

“Tell It Slant” is a new romantic comedy that addresses this by focusing on a strapped-for-cash press office within an unidentified corporate building. Thankfully we are spared an earnest polemic on the topic but instead presented with a highly entertaining, fairly black satire. It initially has the feel of a made for TV sitcom, but its feisty, fresh perspective draws us away from this comfort zone.

Dara is the veteran, jaded press officer struggling to get through the ‘silly season’. The best he can come up with is a story about cats. Enter Vick, a former journalist who has defected to ‘the other side’. It is Vick’s first day in the office and it’s going to be along one. There is an awkward history with Dara and Vick, the unfolding of which neatly mirrors the handling of a major crisis which finally makes them front page news. It’s what they’ve always wanted, but when it happens, the double edges of the sword are sharper than they realised. The fall out is as thick as smoke and impossible to navigate through, made particularly resonant post-Grenfell when the world is constantly looking for someone to blame.

Writer Maev Mac Coille makes the human story stand out against any political backdrop. The context is deliberately vague allowing Joshua Jewkes and Clíodhna McCorley, as Dara and Vick, to take centre stage. Jewkes and McCorley play the dynamics of the duo with a very credible assurance. There is the added interest in the knowledge that on alternate nights the pair swap roles. It is all too tempting to return to see how the story changes when the genders are flipped. Director Erica Miller has brought out a very natural performance from her cast, which belies the demands placed on her and the joint protagonists.

Strong support comes from Alia Sohail as Sam, who provides comic relief and Vincent Shiels as Alex, the office boss who has a somewhat shaky hold on his team, but the stand out is undoubtedly McCorley who has a steeliness beneath her vulnerability which one imagines will really come to the fore when she takes on the other, traditional and more dominant male role.

A fairly short piece, it explores the issues concisely, but sometimes a little too simply. It is a challenging theme which “Tell It Slant” tackles well but does have the feel of a work in progress. But then again, society’s ability to adapt to the ever-growing impact of social media is also an ongoing work in progress. We all blame the technological advances, but this show suggests that we, ourselves, are the main culprits. 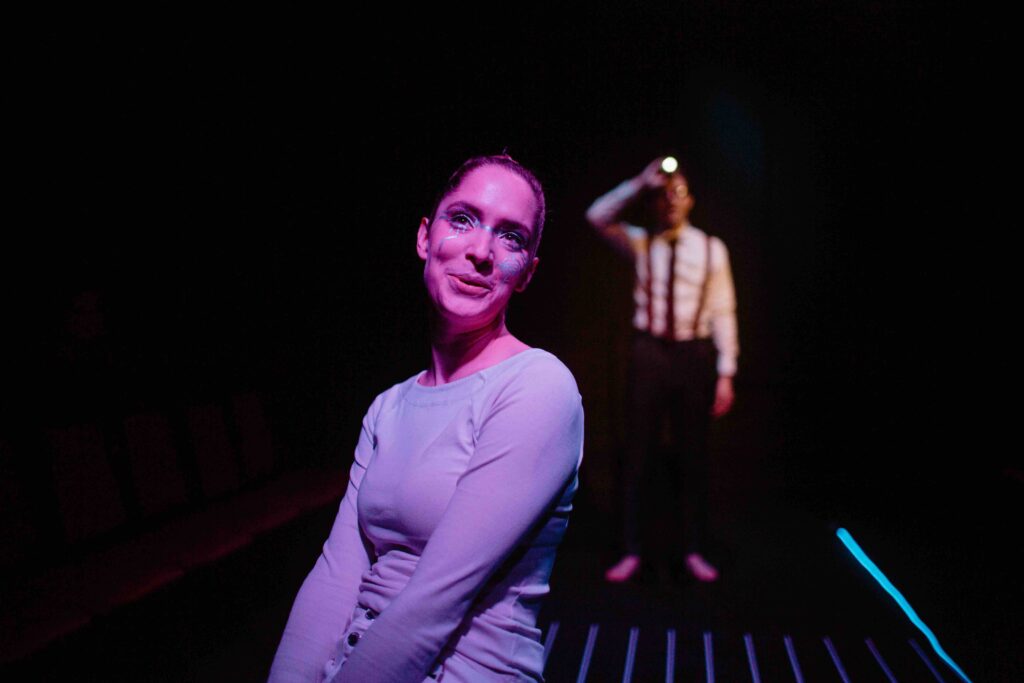 How did we ever cope before the likes of Alexa and Siri being there to aid with (almost) every aspect of our lives? Some may say perfectly fine thank you very much. However, there’s no denying they are slowly taking over. Jack Robson’s playwriting debut, I Woke Up Feeling Electric, inventively looks at how they control our day-to-day in a playful yet thought-provoking way.

What if your home assistance AI was actually, well, rather human? Bertie is one of the originals. He’s been here a long time, giving his owner Charlie all the help and information he needs. He loves his job. He lives for his job. But then again, he’s never had reason to doubt it before. Until Vita comes along. Vita is a newer, more intelligent model who invades Bertie’s space and rocks his world. Trying to get to grips with his lively intruder, Bertie is forced to reassess everything he has so far come to know.

This is an interesting new take on the ‘robot resisting its job’ storyline, à la the likes of Blade Runner, and Westworld. Basing it around the home assistance type AI of Alexa and Siri, which is being used by more and more of us, makes the play far more relatable, and as a result, far more fearsome. Much in the same vain as TV show Black Mirror strives to make you feel. The humanising of AI is something that undoubtedly could happen in the near distant future.

Jack Robson plays the neurotic, uptight Bertie with perfect rigidity, much like a quintessential, English butler. Think Jeeves, with a touch of foppish Hugh Grant. A stronger change in character when rebelling against the system would have been nice to see, but this is more likely an issue with the writing or the direction. Christine Prouty has a clearer, much neater shift in persona from vivacious to clinical, reversing the trajectory of Bertie. Both actors give energetic performances that are highly watchable.

The simple yet effective set design (by Giorgia Lee Joseph) of the bare black box theatre, save for a few rows of UV, fibre-optic looking strips running along the walls and floor, evokes the technological no man’s land that Bertie and Vita are trapped inside. It immediately conjures up the stylistic motif of the classic Sci-fi movie, Tron, transporting you into a futuristic paradigm.

As well performed and as strong a concept I Woke Up Feeling Electric is, the writing doesn’t always live up to the rest. The ending feels underdeveloped and rushed, whilst the bickering between the two AI’s eeks out too long, where more emphasis on a driving plot line is needed. Regardless, this is still a fun and imaginative take on the Sci-fi genre from first timer Robson. It certainly makes your paranoia around Alexa even greater!