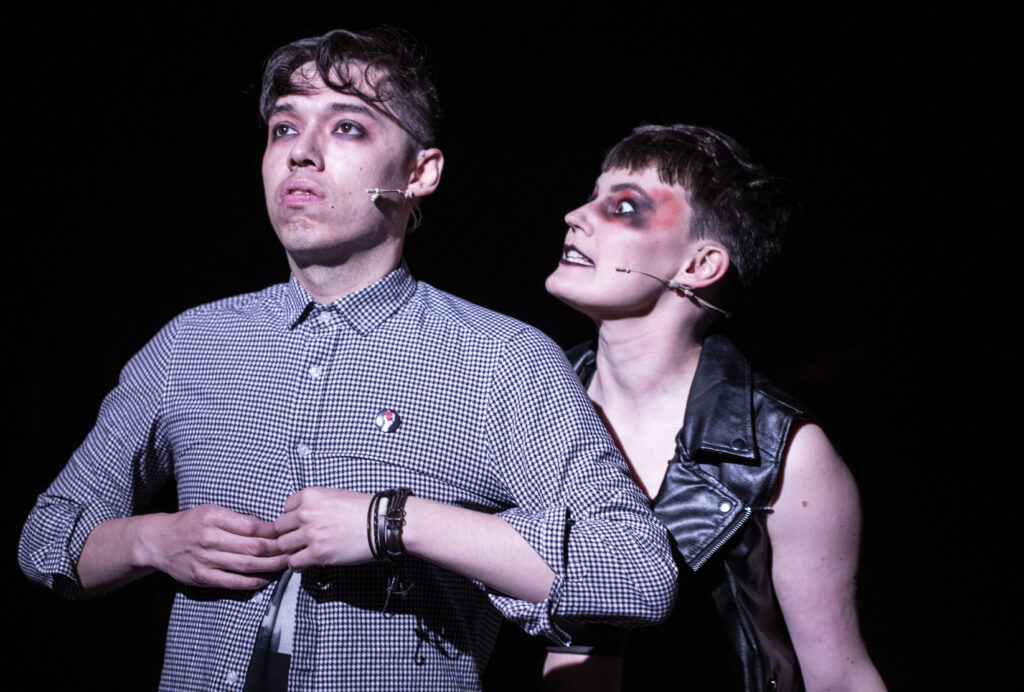 “the large ensemble inject a real energy into the show”

American Idiot, directed by Matt Bentley, follows the lives of three disgruntled young men struggling to find purpose after the events of 9/11. Leaving their small town for the big city with big dreams, the trio’s paths soon diverge when Johnny (Nick Dore) succumbs to his drug addicted alter ego St. Jimmy (Sorrel Brown), Tunny (George Langdown) enlists in the army, and Will (Joshua Yeardley) returns home to look after his young child.

All set to the songs of Green Day’s chart-topping album American Idiot, the eponymous musical explores the political atmosphere of the early 2000s and the presidency of George W. Bush. The album in fact was conceived by the band as a concept album telling the story of a low-middle class American anti-hero Jesus of Suburbia and thus its rendering on stage should not be considered a jukebox musical but rather an already fleshed out tale of woe. The album only has two explicitly political songs – American Idiot and Holiday, both of which feature in the show – but a general theme of anti-establishment is threaded throughout.

Despite its relatively depressing subject matter, American Idiot is a complete romp. The show is jam-packed with songs and medleys and the large ensemble (led by Alice Signell) inject a real energy into the show with their lively dancing and expressive movements (Jen Bullock). The plot itself is simple enough to follow but some more dialogue between songs would really help to bridge the gap between back-to-back songs.

Brown’s performance as St. Jimmy is particularly dynamic and her performance of the song St. Jimmy the strongest in the show. It is a joy every time she is on stage. Dore’s performance is strong too and he truly embodies the early-2000s punk in both attitude and aesthetic. He is wholly believable, and his voice is perfect for his numerous solos. Other notable songs include American Idiot, Know Your Enemy and 21 Guns – all of which the cast deliver with great emotion and enthusiasm.

The band, led by Oscar Denihan, are phenomenal, blasting out track after track. Unfortunately, there were a few technical difficulties with electric guitars not working and sound levels varying slightly, but it was otherwise a fantastic performance from all. James Green on the drums is particularly good.

The set (Andrew Laidlaw) is simple but highly adaptable and the space well used. Black flight cases are used effectively as seats, hospital beds and even coffins of the American soldiers killed in the Iraq war. A Murphy bed is used for certain scenes and cleverly has a shelf with glued-on beer cans on its underside for décor when it is put away.

Costumes (Clare Harding) are authentically early-2000s punk with skinny jeans, flannel and eyeliner abound. Lighting (Olly Levett) is for the most part well done though again there were a few technical glitches with late spotlights and light changes out of beat to the music.

Though a cultural commentary of its time, Green Day’s call for radical change remains relevant today. American Idiot will be a thrill for any lover of pop punk and the amateur cast should be very proud of this production.

Bridewell Theatre until 14th May

Other shows recently reviewed by Flora: 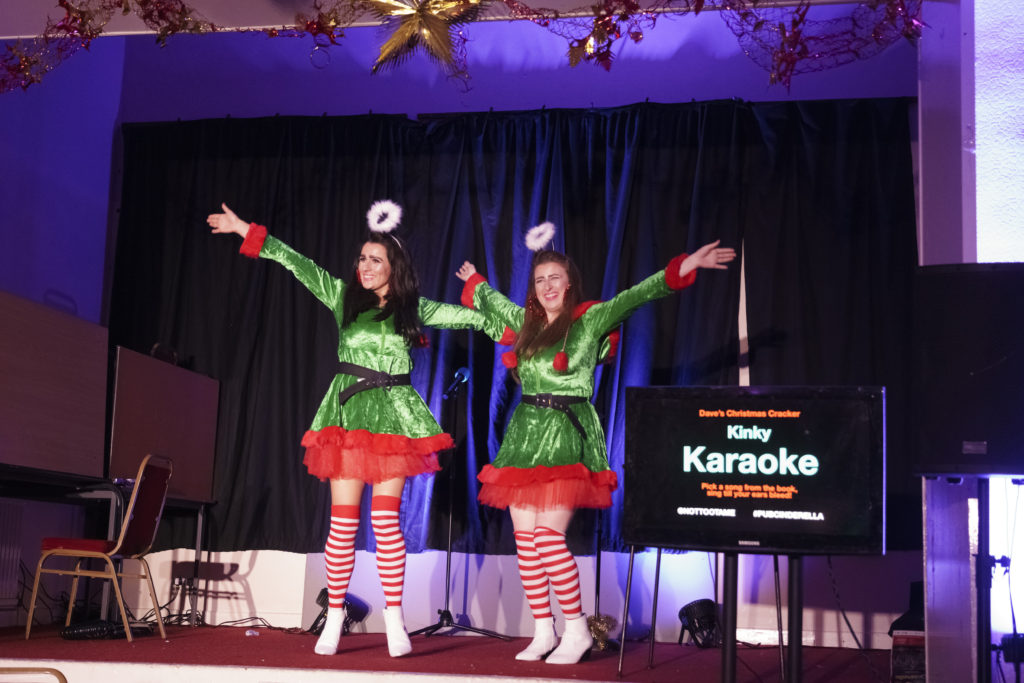 “You soon find yourself grinning, then laughing out loud, swept along by the rowdy exuberance”

From the outset I knew this wouldn’t be a standard evening at the theatre. The opening set piece – ‘Bohemian Rhapsody’ performed with absurd new lyrics – throws you in at the deep end and lets you know what to expect. The Not Too Tame theatre company’s Cinderella: A Wicked Mother of a Night Out! is comical, irreverent and deliberately ridiculous. The show is noisy, smart and streetwise, and you are never more than a few seconds away from another funny line.

To say this show is ‘loosely based’ on Cinderella would be a major understatement. Luke Barnes’ script riffs on motifs from that fairytale and rides a huge anarchic truck through the middle of it with no attempt whatsoever to be faithful to the source material. It’s so fresh, relaxed and spontaneous that it feels improvised. The small cast operate in your midst and ignore the stage altogether.

The ‘story’, what there is of one, explores the fate of the young, orphaned Cinderella (Gemma Barnett), who works in a pub with her smelly, suicidal dog Buttons (Alex Griffin-Griffiths). The latter spends most of the evening carrying a prosthetic leg. (You eventually find out why.) Cinderella also lives with a wicked stepmother called Judy Garland (Jess Johnson) and her ugly sisters Simone and Garfunkel. (Some of the audience might have been too young to get that joke, but I appreciated it). Played by Louise Haggerty and Naomi McDonald, these two absolutely steal the show with a relentlessly flirty, hilariously bitchy double act that’s a delight to watch.

Jack Condon inverts the character of Prince Charming so that his name becomes somewhat ironic. Meanwhile Jack Brown is ‘Mike’, an amiable compere with long hair, a beard and a glittery silver dress. Mike holds the whole thing together, although much of the show’s appeal comes from the way it seems to teeter on the verge of collapse.

Jimmy Fairhurst’s direction makes the most of the small space available, and it works because the bar in which we’re seated naturally becomes the pub in the story. A karaoke machine is utilised at regular intervals for the likes of ‘Rocking Around the Christmas Tree’ and ‘Stand by Your Man’, with the cast singing lustily and drawing the audience into the act without humiliating anyone too much. A few punters are picked on mercilessly, but the actors are skilled enough to gauge who is happy to play along.

Don’t be expecting anything approaching a standard theatre production: this certainly isn’t a plot-driven narrative experience. Plus, if you’re offended by ‘colourful’ language then it’s probably not for you. It’s perfect for a fun night out with a bunch of mates, but don’t take your young kids or elderly parents. The energy is infectious and has the effect of making you feel pleasantly drunk even if you’re still sober. You soon find yourself grinning, then laughing out loud, swept along by the rowdy exuberance. And if all that isn’t entertainment enough, you’re even invited to take part in your own karaoke session afterwards.