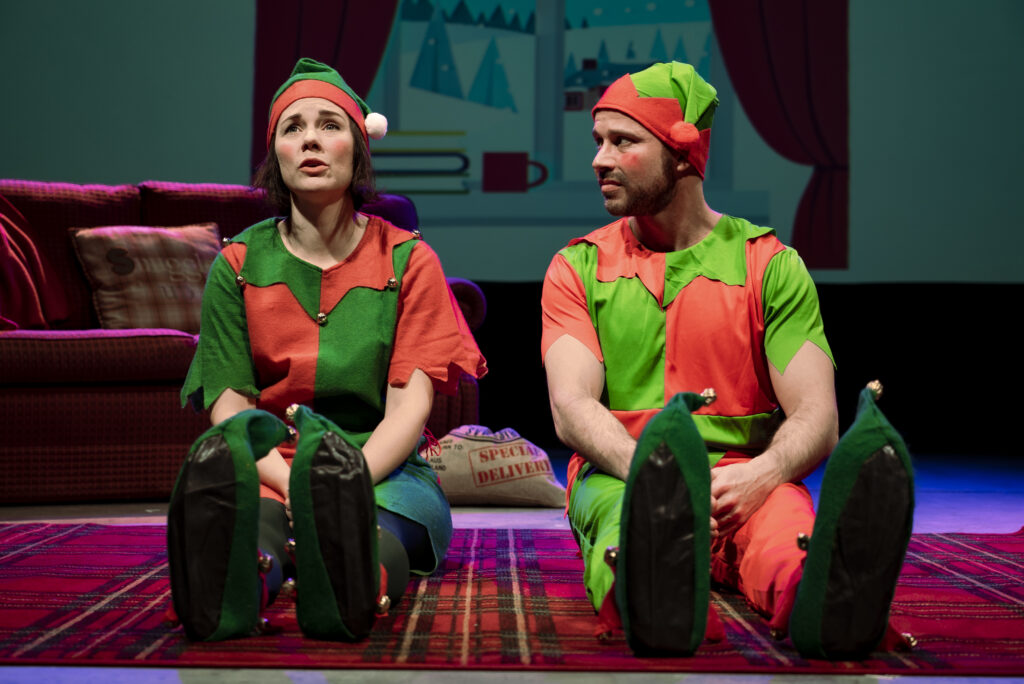 Let’s face it, after the year we’ve experienced, we can all be forgiven for being a little bit scared of Christmas this winter. In fact, it’s safe to say that fear has entered the national psyche all round. But fear no more; help is at hand under the arches on the Embankment. Behind the doors of the Charing Cross Theatre, Neil McDermott and Gina Beck are ready to smash all our misgivings away in an hour long burst of energy, song, dance, storytelling and magical mayhem.

McDermott is ‘Figgy’ and Beck is ‘Cupcake’; two elves preparing for the Christmas frenzy. All is well in their happy-go-lucky world; Cupcake cheerily bidding ‘Good Morning’ to every household object and utensil around her. Until she flips the calendar (after greeting it, of course) over to the first of December. She lets out a scream and dives under a blanket. The children shiver, Figgy quivers. And so the tale begins. Cupcake is scared of Christmas but Figgy cannot understand why at first. After all, you can be scared of many things; spiders and monsters, darkness and dentists; even sprouts. But Christmas? What’s there to be scared of? Christmas is special for… let’s ask the children, shall we?… gingerbread men, hot chocolate, mince pies, snow, snowmen and snowball fights, brandy butter, sugar candy, pigs in blankets and, of course, presents.

It is this final word that triggers Cupcake’s anxiety. So, thenceforth, presents are referred to as ‘thingamajigs’. Until this point, the show seems to have been gliding along on one level, but then the allegories come thick and fast. Cupcake is not so much afraid of the presents themselves, but of delivering them. We can all relate to the increasing expectations and pressures that accompany Christmas. For many it is the hardest time of the year. Cupcake included. Figgy has his own problems too. He believes he has lost his power of magic. Cue a rollercoaster ride of mutual support, with phrases lifted from a shelfful of self-help books. But McDermott and Beck, who also scripted the piece, mask the messages in an absolute joy of a performance. With a nod to the kids and a wink to the parents there’s something for everyone. Amid the slapstick there are tender moments too. And (although it is no surprise given the two actors backgrounds) they both possess spectacular singing voices.

It’s true, some of the platitudes might be lost on the younger members of the audience, but they are spellbound. It’s a delight watching them watching the show: they believe in the magic that McDermott and Beck have. What their characters have forgotten at the beginning of the show is the wonder and joy of Christmas. We need reminding of that. This production is a heartfelt clawing back of the innocence that lies in the eyes of children.

As with all Christmas shows there is a strong element of audience participation, which is in no short supply. But Figgy and Cupcake need all the help they can get. Cinnamon dust sprinkled over an elf, apparently, restores its magic powers. “The Elf Who Was Scared of Christmas” restores our belief in the magic of the festive season. The kids don’t need telling – it’s the adults that do. Listen to them – and listen to that inner child; and, above all, just go and have a good time.