“scales the dizzy heights of funny”

“Brian & Roger”, that carries the subtitle a ‘Highly Offensive Play’, opens the Menier Chocolate Factory’s new smaller space, The Mixing Room. It is a world premiere, but its seeds were planted back in 2014 when the writers, Dan Skinner and Harry Peacock, created the characters for a podcast series. “We had no idea if anybody would listen or care” Skinner recently said. Thankfully they did, and it is to theatreland’s immense benefit that the eponymous characters have now made it to the stage.

Firstly. It is not highly offensive. It is ‘highly’ many things though; highly charged, highly outrageous, highly shocking, highly unprincipled, highly shameless and above all it scales the dizzy heights of funny. The ideas are far-fetched, but you’d travel the earth to keep up with them. The premise is bleak but don’t let that put you off. Brian and Roger are two friends (assume a very loose definition of the word ‘friend’) who met at a support group for recently divorced men. Roger was attending because he was genuinely grieving the loss of his marriage; Brian was instructed to attend by his solicitor if he wanted to dodge paying alimony to his ex-wife. Roger needs guidance and support, which Brian willingly supplies, exploiting Roger’s vulnerability to the extreme. Roger is continually coerced into making bad decisions. Played by Skinner himself, it is a brilliant and hilarious portrayal of a man sinking into the depths of humiliation and injury, with a Panglossian gullibility and belief in the deplorable Brian’s intentions. Simon Lipkin is equally sensational as the hard-nosed but similarly desperate Brian who has found the perfect stooge in Roger. Never has such an unlikeable character been so… well… likeable.

We don’t witness the odd couple’s first meeting. In fact, we never see them together at all. The entire piece is played out on their phones – leaving messages for each other. There is one exception – although we still don’t ‘see’ them together as the scene takes place in a complete blackout. I shall reveal no more except to say that it is a brilliantly darkly funny episode.

Darkness is the key. The humour couldn’t be blacker as Skinner and Lipkin chase the extremes of comedy. It gets progressively more outlandish, as do the peripheral unseen characters who nevertheless loom large over the action, whether it is the octogenarian woman whose sofa Roger lives on, the students Brian is forced to shack up with; the ex-wives, the dominatrices, and gangsters. Even a Mongolian mule named after Roger’s wife! Belief is persistently stretched to breaking point by the sheer outrageousness of the plot. At the same time our laughter lines are stretched even further.

David Babani’s direction is slick, with many neat ideas. It is clear that he has worked closely with his design team. Paul Anderson’s lighting conveys mood and location with the flamboyant touch of a mad professor, brilliantly complemented by Timothy Bird’s projected backdrops. Robert Jones’ design is centred around the drab community meeting room where the pair met. Ingeniously and quirkily though, the play is never set there. Instead, the furnishings and video projections are used to convey – among other bizarre settings – an S&M basement, a hospital ICU, train carriages, taxi cabs, a rugged Eastern European Mountain village, abattoirs, Safari parks, airports… you name it. And to say that the use of props is out of the box is a bit of an understatement. The whole combination, topped off with Gregory Clarke’s soundscape, verges on the surreal.

As preposterous as the storyline is, we are somehow still anchored in real life by the sheer natural flow of Harry Peacock and Dan Skinner’s writing. On paper, the idea of spending two hours watching two sad men talk into their phones sounds like torture. But we are rapt. Skinner and Lipkin are stunning. “Brian & Roger – A Highly Offensive Play”: the idea that one wouldn’t want to see it is more offensive.

Show reviews you may have missed in October: 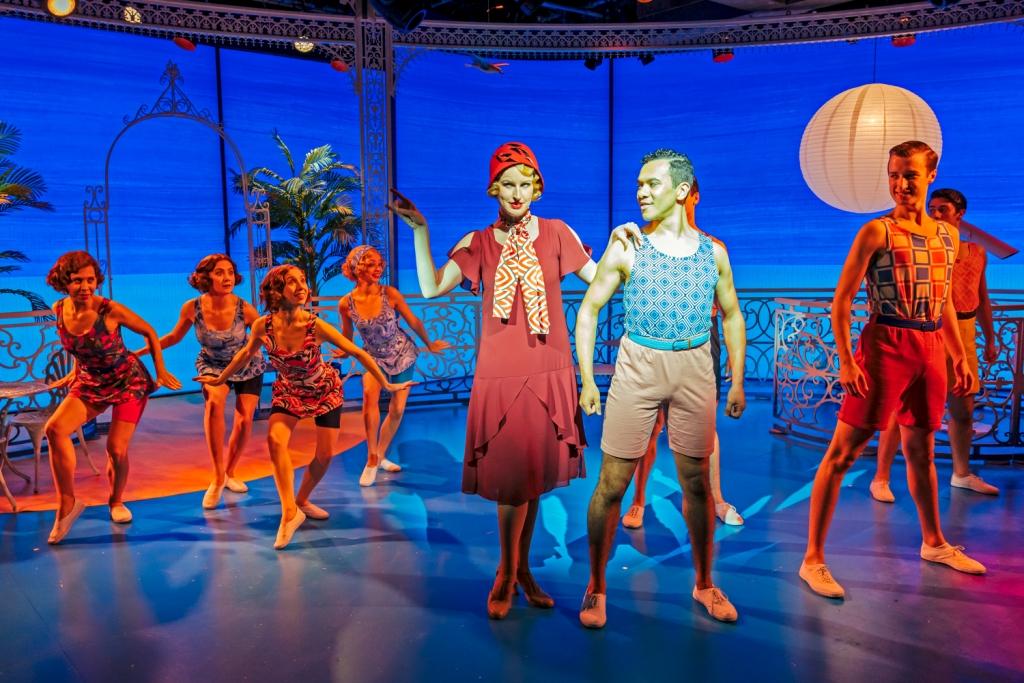 Set on the French Riviera in the 1920s, The Boy Friend was an instant hit on the London stage when it premiered in 1953. It is an affectionate, sun-drenched, period pastiche, and terribly terribly English. The book follows a tried and tested romantic comedy formula: runaway rich boy meets rich girl pretending not to be, they fall in love, overcome a tiny obstacle, and end up in one another’s arms. There is an older comedy couple – man with a roving eye and battleaxe wife – who overcome their differences and fall in love a second time; an older romantic couple, whose love, too, is rekindled, and three satellite young girls, all of whom wind up with their beaux at the show’s close. So far so hackneyed. But you don’t come to The Boy Friend for the plot.

The pleasure of this joyous revival stems in no small part from its truly gorgeous visual impact. Paul Farnsworth’s set is a delicate filigree, bringing to mind bandstands and the balmy air of long summer evenings. Paul Anderson’s stunning lighting design complements each setting and mood perfectly, with a beautiful, bold palette that makes the heart soar. The costumes too are divine, in particular those of the marvellously chic Madame Dubonnet, although the male outfits in the final carnival scene do let the side down a little. The sequins seem somewhat tawdry when set next to the pierrots and Maisie’s whimsical butterfly.

It is very easy to imagine this production on a West End stage, and it seems highly likely that it will transfer, but it was a delight to see it up close in the Menier Chocolate Factory, and to hear it up close too. The orchestra, directed by Simon Beck, was a triumph, and performed Sandy Wilson’s score with the brio and tenderness it deserves. And the dancing… The dancing was out of this world. Sharp, snappy, sexy, infectious, fabulous. Terrific choreography from Bill Deamer and a knockout dance performance from Gabrielle Lewis-Dodson, as Maisie, in particular. This production is well cast, and all the principals shine. Amara Okereke is a perfect Polly – all innocence and charm – and has a radiant soprano which is blissful to listen to; Dylan Mason’s Tony is earnest and gauche, and there is delightful on-stage chemistry between them. Janie Dee brings some star quality to the delicious, flirtatious Madame Dubonnet; Tiffany Graves is full of fun and mischief as Hortense and Adrian Edmonson gives a peerless comic turn as Lord Brockhurst.

There are a few wrinkles in the fabric – Act III loses pace, mainly owing to the superfluous tango routine, and the shrillness of Polly’s three friends is overdone – but, in essence, The Boy Friend falls around you with the caress of a fine silk kimono and you can head off into the cold December night with the warmth of the Riviera in your step.