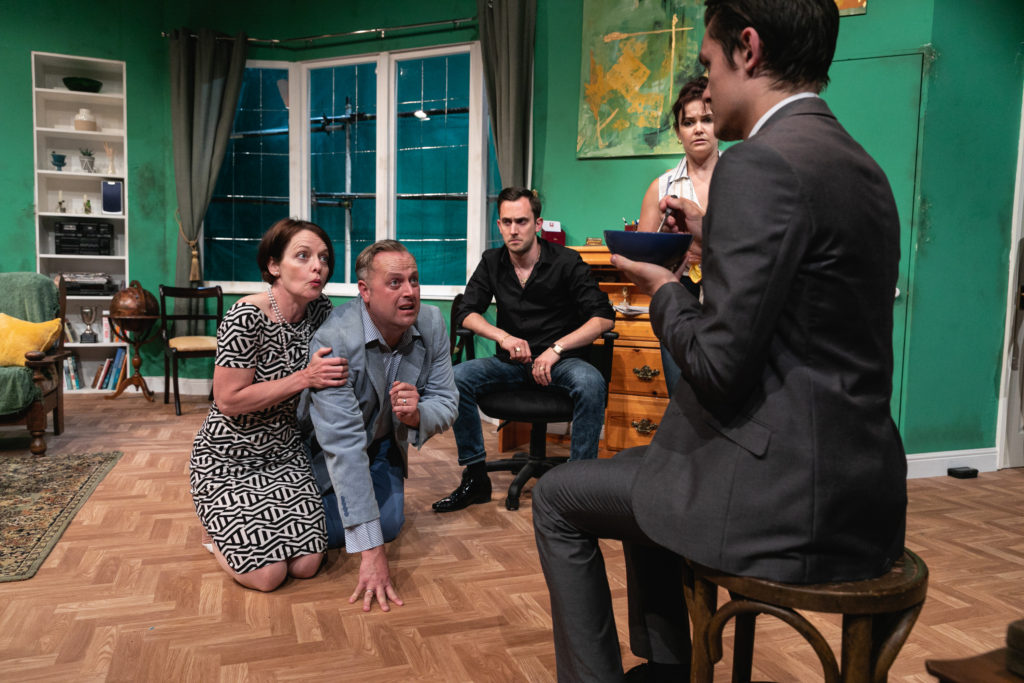 Flat Out is a good, old-fashioned farce. It details an afternoon in the lives of a small group of people in a prestigious but mice-infested South Kensington flat (hence the pun of the title) during the Brexit-centric month of March 2019.

The plot is too much of a tangled shaggy-dog story to summarise sensibly, but it begins with an illicit tryst between dental hygienist Angela (Jennifer Matter) and lawyer Giles (Richard Earl). It certainly grabbed everyone’s attention when, in the opening seconds, Angela removed her coat and dress to reveal a skimpy Ann Summers outfit. But the couple’s anticipated pleasure is endlessly delayed by a chain of unexpected visitors.

In keeping with the style of a typical farce, bad luck, coincidence, misunderstandings and mistaken identity drive a sequence of increasingly absurd and improbable events. The comedy comes from the thickening web of inexplicable statements and actions that only the audience can understand. Jennifer Selway’s exceedingly clever writing is maximised by a cast able to expertly tease out every laugh possible from each other’s escalating misfortunes.

It’s very much a London show, with an obvious fondness for the city demonstrated by references to its locations, landmarks and public transport. There’s a fair amount of satire, too, with nods to gender politics, greedy estate agents, social media and what it means to be rich or poor in a bitterly divided Britain. While the Brexit theme is a subtle one, it’s nevertheless an important thread running through the narrative.

Timing all those entrances and exits so perfectly can’t have been easy, but the coordination of this complicated, often highly physical comedy is superbly managed by director John Plews and the entire Ovation company. And the ingenious, economical set design by Emily Bestow made it possible for the various comings and goings within the flat to interact seamlessly as doors opened and closed and windows were hastily clambered in and out of.

The way the various loose ends are resolved at the end makes for a hugely satisfying conclusion to a play that balances hilarity with a sophisticated look at the way we live.

Upstairs at the Gatehouse until 30th June 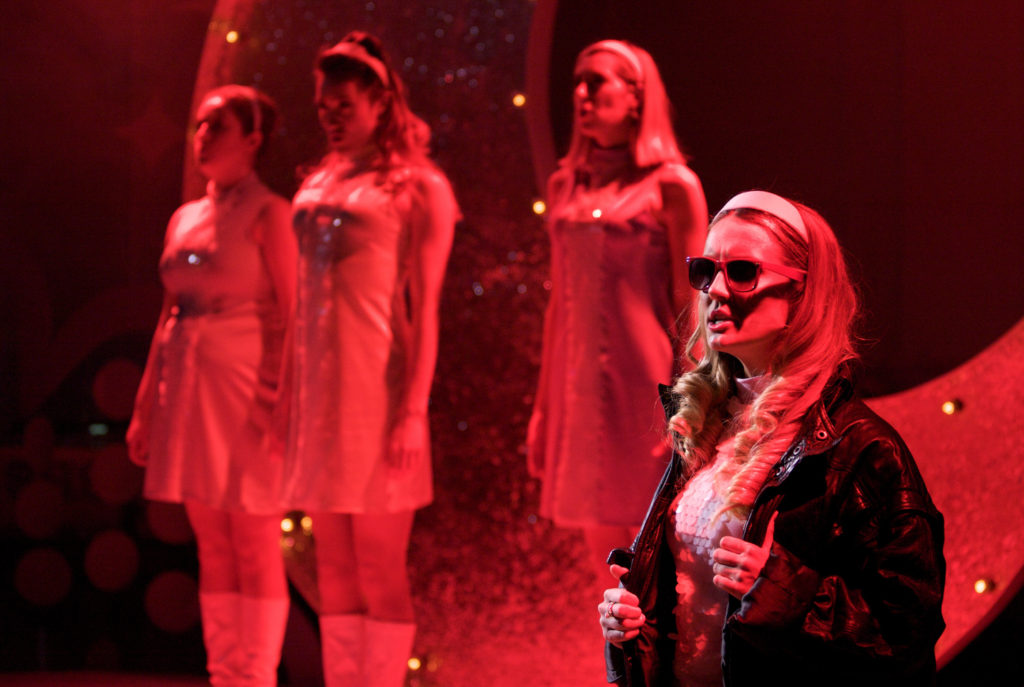 “a celebration of two great eras for music”

It’s 1958 and the evening of Springfield High School’s prom. The Marvelous Wonderettes, consisting of Betty Jean, Cindy Lou, Missy and Suzy, are set to provide the entertainment, and that they do!

The four performers are immediately recognisable as 1950s teenagers. Costumes (Emily Bestow, Designer, and Susan Hodges, Costume Supervisor) are classic fifties style dresses, each one a different pastel shade, which makes for an eye-catching design element. This is complemented well with the use of matching props including lollipops and school exercise books.

Within Act One we’re treated to an array of fifties hits (vocal arrangements by Roger Bean and Brian William Baker), including Mr. Sandman, Lollipop and Stupid Cupid. As well as group numbers, each character performs solos as part of their efforts to be voted Prom Queen. Joseph Hodges has directed them well and good use is made of the small performance space.

Act Two finds us at Springfield High School’s Class of 1958 ten year reunion, with obvious sixties style costumes a clear reflection of this. The Marvelous Wonderettes are again performing, but this time with updates on their love lives, heartbreaks and big events. This is realised through the performance of hits from the sixties, including You Don’t Own Me, Son of a Preacher Man and Respect. In both acts, the four performers display strong vocals as well as good storytelling through song.

Characterisation is spot on, with each girl bringing something different to the table with their personaility traits. From Betty Jean (Louise Young) and Cindy Lou’s (Rosie Needham) clear schoolgirl rivalry to Missy’s (Sophie Camble) sweet peacemaker role and Suzy’s (Kara Taylor Alberts) lovable quirkiness, there’s a lot to keep us entertained.

This show is undoubtedly a celebration of two great eras for music. Although the plot (Roger Bean) is quite basic, this is not a massive issue as the four performers do a good job of engaging the audience through their delivery of the catchy songs, as well as some highly entertaining audience interaction scattered throughout. With impressive harmonies and high energy performances, go and join The Marvelous Wonderettes for an evening of nostalgic fun.

Upstairs at the Gatehouse until 12th May