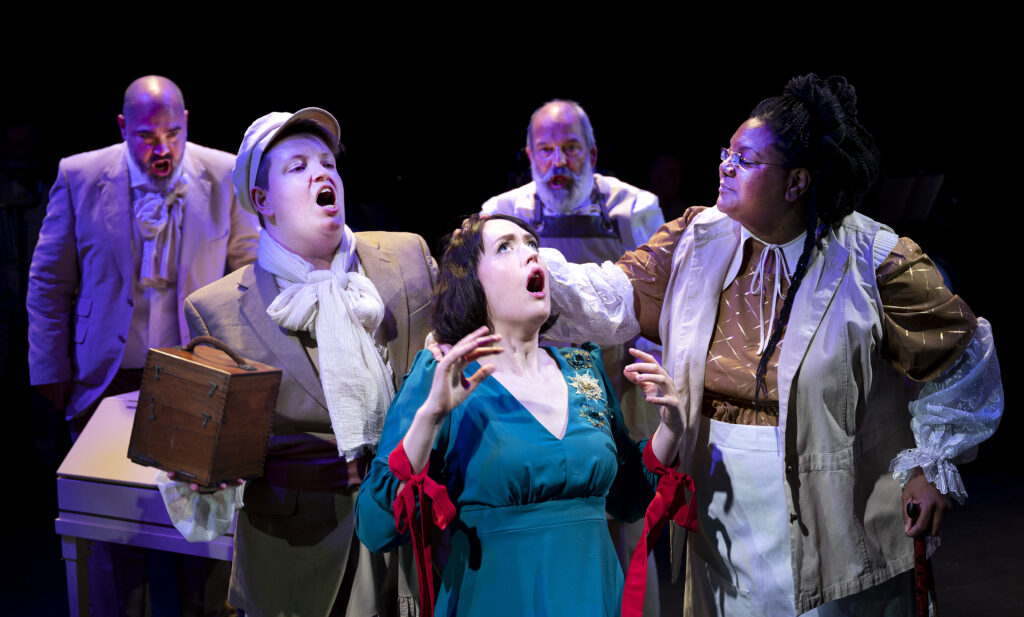 Graeae Theatre Company presents a new chamber opera by Errollyn Wallen, libretto by Nicola Werenowska and Selina Mills, directed by Jenny Sealey, and conducted by Andrea Brown. The performance is a celebration of inclusivity with a mixed ensemble of disabled and non-disabled performers.

There are two sets of period furniture on either side of the stage (Designer Bernadette Roberts). A striking white harpsichord at centre stage turns out to be a model with a dummy keyboard. Illuminated cabinets provide an entrance to the action on one side and a costume rail on the other. A third illuminated cabinet suspended above the band is revealed as the surtitle screen. These surtitles, welcome despite the opera being sung in English, are displayed in stylish fonts on a parchment background.

The main characters are Hilde, the Baroness von Paradis (Maureen Brathwaite, soprano), and her daughter, the blind pianist and composer Maria Theresia (Bethan Langford, mezzo-soprano). The starting point of the opera may have been to bring out from obscurity Theresia’s successful life story against the odds. But the soul at its centre is the relationship between a mother and her daughter.

Composer Errollyn Wallen endeavours to evoke the sounds of both ‘posh’ and ‘street’ Vienna so the onstage band (musicians of the BBC Concert Orchestra) includes accordion alongside piano, violin, double bass, and drums/percussion. Wallen’s style for the piece is difficult to place; there are elements of the classical period (as befits the era of Salieri and Mozart) but also contemporary spikiness and other elements of jazz, swing and rock. A motif made up of piano scales and exercises represents the necessary practice at the keyboard for Theresia to make it as a musician.

An enterprising technique involving a quartet of Gossips (Ella Taylor, Andee-Louise Hypolite, Ben Thapa, & Omar Ebrahim) spells out what is happening in the plot – a form of musical audio description – and moves the action forward. Much of their onstage antics which includes playing air guitar in one scene and some comedic dancing in another is regrettably obscured from view behind the furniture.

Two stand out scenes are the visits of doctors to cure Theresia from her blindness – “binding, pinning, cutting, lighting” – the onstage action does not need to be graphic for us to understand the torture that goes on here. And the moment of enlightenment that follows as Theresia understands she can find a future for herself despite everything, “I know I am limitless”.

The importance of inclusivity within the production is highlighted with the integral roles of the two Performance Interpreters (Chandrika Gopalakrishnan and Max Marchewicz). Not only do they BSL sign the words throughout the performance but they take an active part in the action too. Ms Brathwaite may sing about slapping her daughter, but it is Chandrika who is doing the slapping. The whole company signs together as they sing ‘The Blind Enchantress’ – a nickname given to Paradis during the English leg of her European tour.

The opera is well played and sung throughout. Bethan Langford and Maureen Brathwaite are particularly excellent and provide the most moving moments of the performance. The ensemble combines well together despite some clumsy moments. Whether the libretto tells the story it intended to, I am unsure, but as a showcase of what is possible to achieve despite disability, Graeae Theatre have created a memorable piece of work.

Other shows reviewed by Phillip this year:

Piece for Person and Ghetto Blaster

“this is a piece that’s highly accessible, proving that performance art is something to be enjoyed by all”

The difference between right and wrong. That’s something we are taught from an early age isn’t it? Always trying to do our best, developing into a better person. But what happens if those lines between good and bad, peace and conflict become skewed? Highly regarded performance artist Nicola Gunn explores these very notions in her latest work with an observant eye and playful demeanour.

There’s a woman. In Ghent, Belgium. She’s been running along a canal. She stops as something catches her eye. A man is throwing stones. At a duck. In the canal. What takes over is a barrage of contemplation about human behaviour, principles and the question of intervention. All whilst dancing around the stage. Naturally.

The work is very much a product and a response to our times. Gunn captures the dilemmas, debates, and dichotomies that rapidly fly around our heads between what’s considered good or right, keeping our consciences clear, maintaining a moral high ground, what’s deemed politically correct, and our trust in strangers. Her high voltage energy and constant distraction, with conversations trailing completely off topic, represents our confusions and incessant state of worry, fear, and anger. The world right now is in unknown territory, and Nicola reflects this through the lens of an artist’s perspective.

Gunn is non stop. Coinciding with the text, the piece is a series of jerky choreographed movements (wonderfully created by Jo Lloyd) that offer humour, deeper subtexts, or just pure irrelevancy that adds to the pleasing ridiculousness of it all. The ‘dance’ moves are generally fitness based, mimicking downward facing dog yoga poses and aerobic-style stretches that links to the story told.

Gunn is a multi-faceted artist. Not only a performer but also a writer, director, designer and dramaturg. This all-rounder creative eye means she has a clear objective of what she wants the overall aesthetic and final product to look like. Even if she does have a crew of experts to mobilise her vision. The use of lighting and sound, designed by Niklas Pajanti and Kelly Ryall, feels integrated within the story, particularly the electronic repetition of beeps and noises composed to blare out of the ghetto blaster, which informs Gunn’s movements, as much as her movements informs the music.

The last segment does take a completely different turn to the rest of the piece, lying in stark contrast, which will certainly divide audiences. It’s very much a love it or hate it moment. It’s avant garde nature lives up to the stereotype of what performance art is considered to be by the uninitiated. But having had such tongue in cheek moments earlier in the monologue, poking fun out of the performance art world, this last part could be considered a send up to the medium in which Gunn works in.

Nicola has the ability of making a highly-polished, well rehearsed piece still have an air of spontaneity. Her self-awareness as a performance artist is refreshing, questioning the role art has in society. The instinctive comic-timing that Nicola possesses makes the humour come across unforced, even in outbursts of madness. At times people may feel a bit bewildered or uncomfortable, but generally this is a piece that’s highly accessible, proving that performance art is something to be enjoyed by all.

Piece for Person and Ghetto Blaster