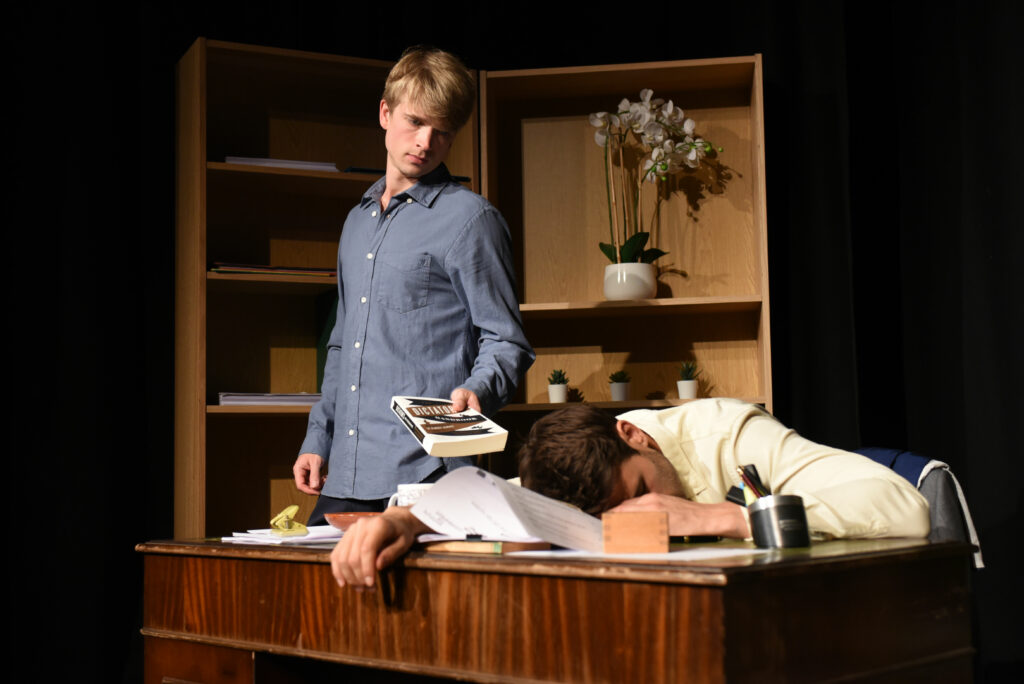 “a very smart play which is carefully constructed in its script, characters and set”

Why are we the way we are? What inspires and motivates us? What do we really know about ourselves? Type on Paper, directed by Tallulah Sheffield, is a self-referential comedy that aims to answer these very questions. Ben (Kriss Dillon) is trying to write a play about the rise (and fall) of fictional politician Miles McClean (Edward Green). With the Labour leadership up for grabs, Miles and his long-suffering aide Sophie (Helen Percival) are keen to make a bid for power no matter the cost to their personal lives.

Miles, however, isn’t too fond of what Ben is writing, and he’s not afraid to tell him. Miles challenges Ben to consider what his play is really about, and soon Ben finds himself written in as Miles’ eager young scriptwriter. The boundaries between Ben the character and Ben the playwright quickly blur and through interacting with his own characters, Ben begins to explore his anxieties and connect with his subconscious.

The play’s concept is great and thoroughly unique. The back and forth between the three characters and Ben and Miles in particular is very quick and jokes are aplenty. Percival and Green have excellent chemistry and it is highly believable that they have worked together for many years. Dillon shines best when he enters the play as Miles’ scriptwriter, and this is a clever way of exploring his character.

Ben and Miles complement each other well. Ben is awkward, dreams of success and hung up over an implied ex-girlfriend. Miles is confident, powerful and a huge success with the ladies. Sophie is a good bridge between them; quiet but not afraid to speak her mind. Sophie also facilitates Ben’s self-discovery by encouraging him to open up. Though their conversations are very sweet, a woman helping a man access his emotions is a rather tired trope, and Miles’ to-the-point life advice makes for much more engaging scenes and gives real pause for thought.

The stage is split into two halves between Miles’ office and Ben’s writing space though there is no dividing line and all characters regularly cross between this vague boundary. On Ben’s side, a dark leather armchair, a typewriter and a set of shelves. On Miles’ side, a cluttered desk and shelves overflowing with files. The two sides of the room mirror each other nicely much like the characters of Ben and Miles. This set-up works particularly well in the opening scenes when Ben taps away on his typewriter as Miles and Sophie discuss education legislation.

A black curtain serves as the backdrop and the characters leave and enter the stage through an opening behind Miles’ shelving unit. This entrance is used best when Ben attempts to rewrite a conversation set in Miles’ office and Sophie must repeatedly run back in and out to set the scene up again.

The lighting is mostly static during the action on stage. When a scene ends, the lights fade to black and then come back on when the actors have repositioned themselves. This is not always the smoothest transition but is an easy way of moving between scenes. The lighting is used well early in the play to convey Ben’s month-long writer’s block. Here, Miles sits and mopes in dim light as if locked up in Ben’s brain until Ben walks back on stage and the light returns.

Type on Paper encourages the audience to look inside themselves and think about who they are and why. This is a very smart play which is carefully constructed in its script, characters and set to make a larger and profound comment on human existence.

Photography by by Edward Green 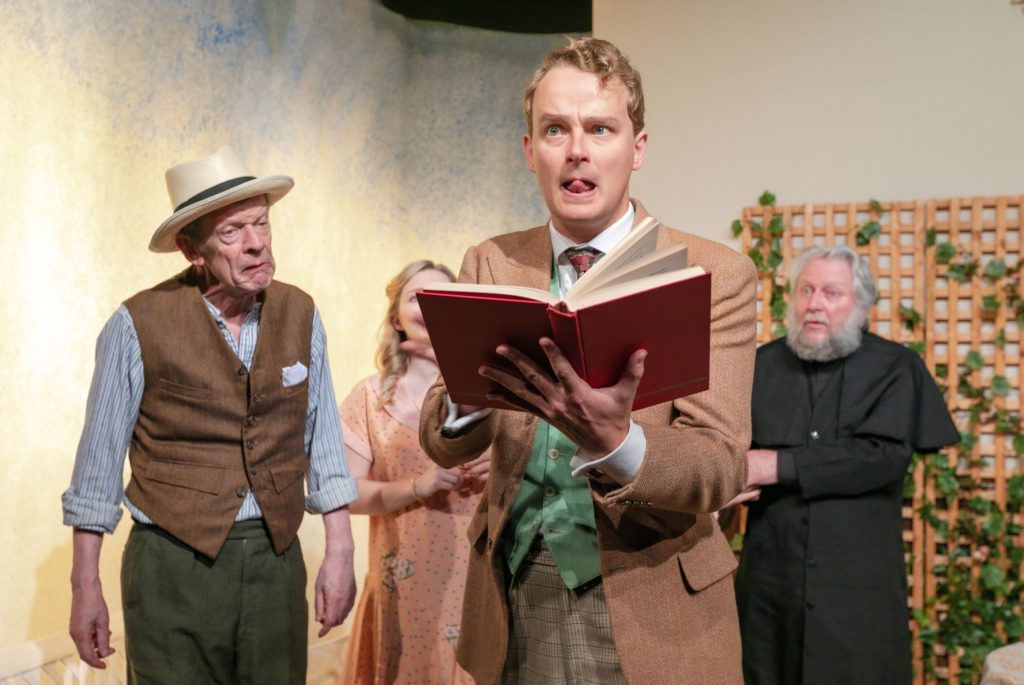