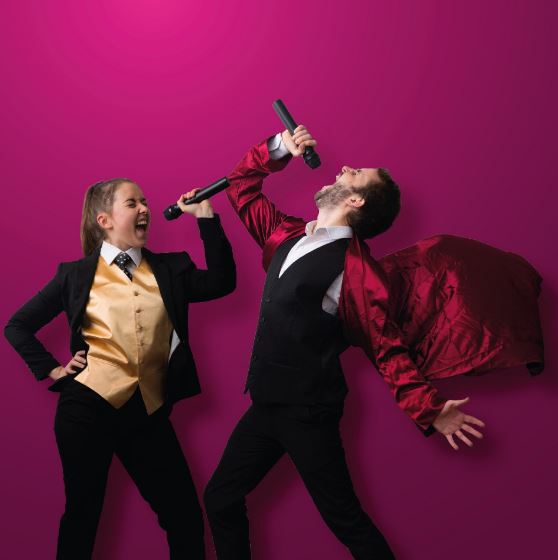 “a fun and ultimately sincere one hour show which begins to portray the music, emotions and indigenous people of those glorious double zero years”

Previous decades have had their iconic theatre revivals. The 70s have Mamma Mia!, the 80s has The Bodyguard, and the 90s has Viva Forever! What should be clear from this list, is that the further away from a decade you get – the easier it is to write theatre for it. Coming Out Of My Cage is a genuine noughties musical, replete with all the nostalgia, joy, youth and instability which comes with the attempt to look back so soon.

Our two performers (Hannah Fellows and Tim Chapman) present a sort of old-style revue comedy act as the pair portray the creation of the show in which they are currently performing – what could be more millennial or post-modern than a show about itself? The characters, on stage and through their high-quality audiovisual content, trawl the web for every performance of Mr Brightside by The Killers only to become obsessed with one karaoke performer in the north of England. As their journey culminates, the duo finds the point at which their favourite party banger becomes a poignant swan song.

At the same time, just like the smashed avocado which, without doubt, fuelled this show – Coming Out Of My Cage tastes good but is a little green around the edges. The lack of tightness is a little challenging to ignore in the imposing setting of both the vaults physical and VAULT Festival. Moments of distracted audience participation are more Butlins than Beckett plus references and in-jokes are often not quite as funny or clever as they’re meant to be. However, these details give way to a show that does have a heart. The temptation to ironise, gimmick and meme, eventually becomes the servant to a human story.

Projections and sound recording, which Shepard Tone pride themselves in, come and go telling the story of the actors’ journey to find their mystery singer. Each section moves the narrative along well and is enjoyably novel and modern – the projections were sometimes tricky to follow due to the space, but this wasn’t enough to ruin the moment and creativity.

An opening gimmick literally sets the stage – the actors begin inside a cage which is left present for the remainder of the performance. Both performers dress in the sumptuous golden suits and ties of The Killer’s music video and this places the play in the same dreamlike Moulin Rouge where that music video occurs. On stage, music is a must for the millennial show, and the synth, ukulele and accordion are pleasant if a little off-piste from the story.

A protozoic noughties Mamma Mia!, Coming Out Of My Cage is a fun and ultimately sincere one hour show which begins to portray the music, emotions and indigenous people of those glorious double zero years. More shows will follow, and although this was the first and not the best, it is entertaining, committed and novel. The next time a newspaper columnist says that young people are too alienated and purist to have fun, make mistakes or to show they care about the little things – show them this show. 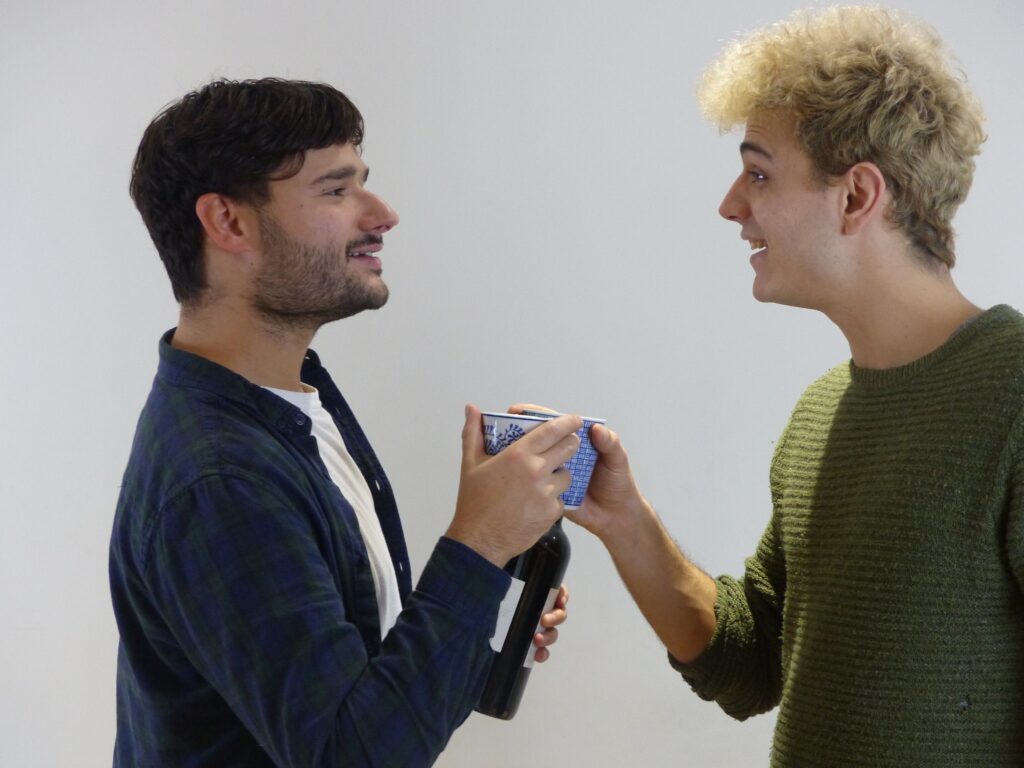 Preparing to slaughter and eat a person for mutual pleasure and fulfilment is a fundamentally awkward affair, when you think about it. And Edward Stone, Pedro Leandro and Evan Lordan have really thought about it. Fiji, written by the trio and directed by Lordan, is inspired loosely by the story of Armin Meiwes who, in 2001, famously ate a willing volunteer in Germany – Fiji is not a retelling but is more of an admiring sequel to Armin’s story. Nick (Stone) and Sam (Leandro) meet online to consume and be consumed in Croydon (of all places) – but the story becomes a sort of charming rom-com with cannibalistic horror stuffed into its deep crevices.

Sam has travelled to Nick’s flat so that Nick can eat his entire body over two weeks – there’s no secret or mystery about their intentions which adds a pregnant, awful and comic irony to every scene. Little occurs as the two go through a crescendoing weekend together, knowing that it will only culminate cannibally. Intertwined with these two days of getting-to-know-you talk, is Sam and Nick’s final conversation which is split up and scattered through earlier scenes. In this last conversation, they each answer a series of questions designed to foster and build intimacy through vulnerability – with the answers as poignant interludes in a show which otherwise has the energy of How I Met Your Other cut with America’s Most Wanted.

Stone, Leandro and Lordan thread the needle expertly with their dialogue and the characters it conjures. The joking, banter and affection of cannibal and his future meal have great poise and keep the relationship grounded and relatable. It’s not horrific, but equally, it’s not especially sentimental. Standing as a testament to the cleverness of the writers was one strange moment – when Sam fled just before the butcher’s knife, instead of celebrating, one audience member cooed with disappointment and heartbreak that the characters had fallen out!

This cheeky little play asks you to laugh at the point where the horrific meets the banal. When you ask a man-eater if he’s vegetarian or refer to someone as the ‘Obama of Cannibals’ it’s clear that we’re already in a very strange and a very original place. The characters are loveable and fun – Edward Stone’s performance is the foundation, but Pedro Leandro’s performance slowly builds as it becomes both more lovable and more encrypted. Whether you want a thought-inducing challenge or a good belly laugh – Fiji is well worth your time.