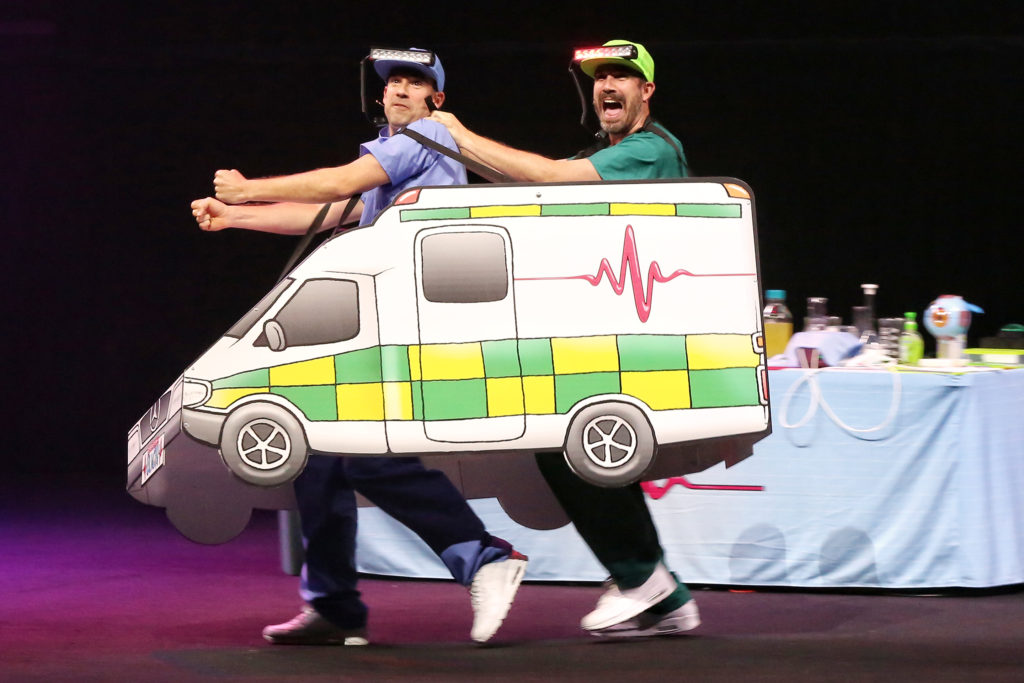 “a clever show, entertaining, educational, surprisingly tender and a whole lot of fun!”

I have to say that I wasn’t looking forward to going to see this. My plan to take an eight year old fell through, so I was going to be sitting in a theatre full of screaming children for over an hour, like a strange adult island. However, I loved it! It’s a clever show, entertaining, educational, surprisingly tender and a whole lot of fun! I learned some things I didn’t know about the brain and the eye, and saw videos of things I never want to see again, like maggots on an open wound – which the kids all loved. There was earwax, a live close up of a larynx and some inflatable pig’s lungs. Not to mention giant bouncy viruses that filled the auditorium, and an exploding balloon.

Operation Ouch! is a TV show on CBBC, presented by twin brother doctors, Chris and Xand, and in this live show you can feel their love for each other. Chris is the straight man and Xand is the hapless one, who didn’t do well at school. Without being at all preachy, they used Xand’s old school reports, and his memories of being thought stupid and naughty, to let the kids know that finding a passion can be a great route to sorting your life out and moving on. The fact that Xand became a doctor is proof that it worked for him. There was also a beautiful piece, near the end of the show, about how to deal with anxiety, building on one of the earlier, hilarious, pieces about how the brain responds to threat.

There was just enough panto in it to be brilliantly funny, including a few ‘oh yes he did, oh no he didn’t’ moments, and a sing along near the end.

If you have child, go and see this. If you don’t have a chid, maybe borrow one. You’ll both have a great time!