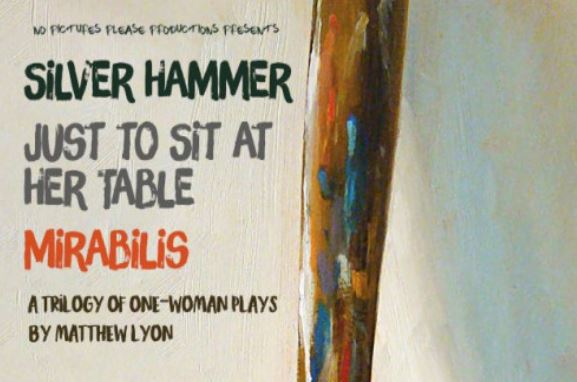 A Trilogy of One-Woman Plays:

Just to sit at her Table, Silver Hammer and Mirabilis

“there are nuggets of likeable characters, dark comic wit and new voices that give the show its unusual energy”

Matthew Lyon brings us three female monologues, interwoven among each other and covering topics from female psychopathy to spiritual anorexia. Each monologue is cut and scattered on top of the others as the show tries to pull the characters closer together. While there’s no direct interaction between the actors, their physical presence on stage naturally assumes a connection, and the viewer reads each in the context of the others. This mosaic adds complexity but introduces confusion.

The first to speak is Sadie (Tayla Kenyon), a 21st-century spelling pedant and sex worker. Sadie speaks directly to the audience and is fully aware that she is on stage. Carly (Ellen Patterson) and Laura (Sirelyn Raak) follow. Carly is engaging and complex as she recounts various murders she has committed with the intensity and the attitude that makes me think she might be the Patrick Bateman for the #MeToo era. Lastly, Laura is the most cryptic of the three. She is said to be suffering from Anorexia Mirabilis, a version of the eating disorder stemming not from beauty standards but instead from a constant seeking of God.

While each monologue on their own makes sense, together they’re a stool with different length legs. At times, the seat seems to sit flat with the women complimenting each other, but more often than not there is a struggle to grasp what binds the threads together (other than their shared author). There were some excellent candidates for unifying themes; alcoholic parents, hedonism, or self-gratification. But, none quite fit properly, and the stool ended up a little lopsided.

The acting is technically very sound from all three. There’s little development throughout the evening, but each of the women on stage brings something different to the piece. The set and lighting are minimal in the incredibly cosy Bread and Roses Theatre. Pulsating coloured lights give elements of the show a dreamlike setting and the catwalk setup provides the actors with the space where they need.

Ultimately, these neat characters perish in their embrace. Presented alone they make sense, but spliced together the audience member is left lost without a clear message. Nevertheless, there are nuggets of likeable characters, dark comic wit and new voices that give the show its unusual energy. 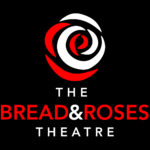 A Trilogy of One-Woman Plays