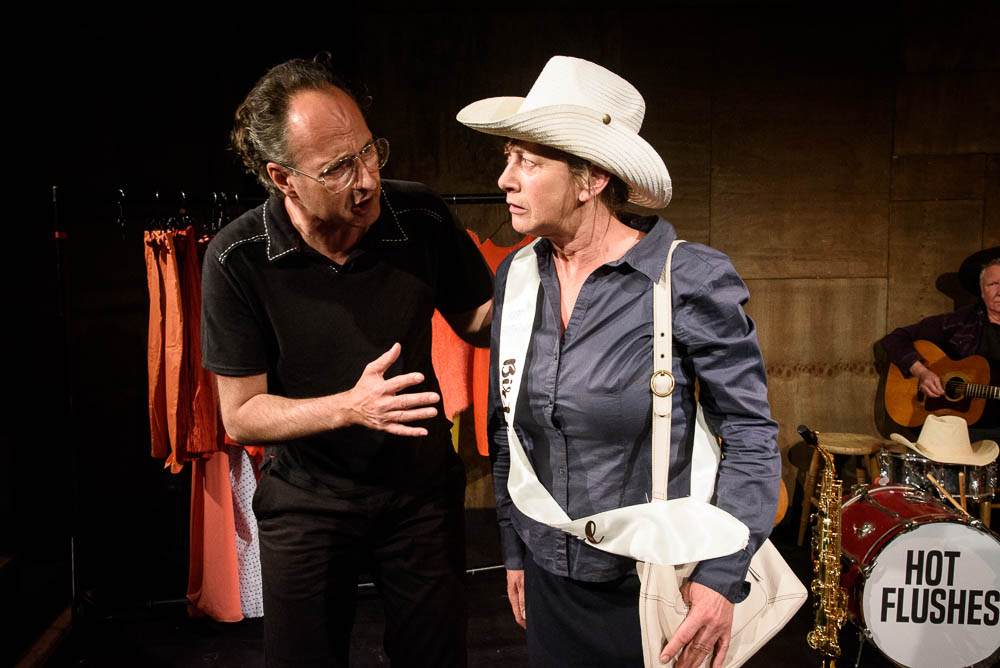 “has potential, but it didn’t quite pack the punch I expected it to”

Camden People’s Theatre is currently presenting a series of plays as part of their “Calm Down Dear” season. This is a three week festival of “innovative female performance”.

Hot Flushes is Documental Theatre’s offering to the festival. Written by Lucy Bell and directed by Anita Parry, the show is centred around Sandra (Michelle Ridings), a sixty year old woman who falls victim to department store BHS going bust. Not only has she lost a job she’s had for decades, but she’s also being denied her pension. Understandably angry, a chance encounter with Patsy (Katy Sobey), a ballsy member of the National Rifle Association, leads Sandra to believe she can take matters into her own hands.

There are four performers on a stage that is simply set with two clothes rails on either side. Three of the performers play instruments to accompany the original songs (Charlie Coldfield & Thomas Johnson) scattered throughout. The musical elements are generally well done and there are nice harmonies in some of the songs, although the show could benefit from more polished vocals overall. Katy Sobey is by far the standout performer vocally and shows versatility through playing Sandra’s twenty-one year old daughter, Jolene, as well as NRA member, Patsy. She also brings some of the songs to life with her skill as a saxophonist.

In terms of Hot Flush’s concept, Documental Theatre has chosen well. There is a good level of normality, which audiences should be able to relate to. The show explores family dynamics, mother/daughter relationships and the strains that these can come under, inequalities, and caring for an infirm family member, as Sandra does with her husband.

At times, I did find it hard to engage and felt some of the songs came a bit out of nowhere. There are also some over the top moments that perhaps go a bit too far, but this could be seen as a display of the heightened emotions and fantasies of a sixty year old woman at the end of her tether. Hot Flushes has potential, but it didn’t quite pack the punch I expected it to. There are some good ideas and performances, so it would be interesting to see if the show develops further in the future.