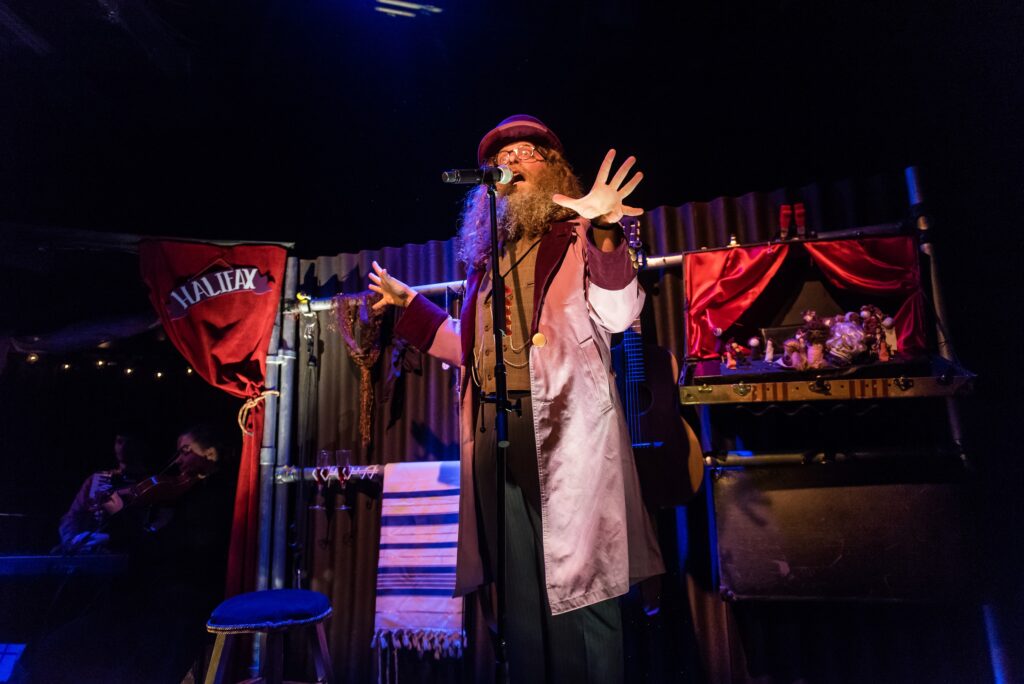 “full of joyous music, inspired storytelling, ribald humour, and yes, plenty to think about regarding the fragility of life”

Old Stock: A Refugee Love Story by Hannah Moscovitch comes to Wilton’s Music Hall by way of the 2b Theatre Company based in Nova Scotia, Canada. It is, as one might expect from the title, a story of emigration. The word “refugee” gives notice that this is not about voluntary emigration. As the story of Chaya and Chaim unfolds, we are introduced to a relationship between two people forged out of the tragedy of pogroms and marginalised lives in Europe, and to the challenges that beset them as they struggle to forge a life together in the New World. Old Stock reveals a tale of people poor in material belongings, but rich in culture, even if problems of letting go of the past keep them on the brink of tragedy in a new, and not always welcoming environment. If this sounds like a show full of unrelieved sadness, it is not. Old Stock is also full of joyous music, inspired storytelling, ribald humour, and yes, plenty to think about regarding the fragility of life. It is eighty minutes full of vivid contrasts held together by the glorious singing and acting of Ben Caplan, who, as the Wanderer, serves as commentator and master of ceremonies.

Wilton’s Music Hall is also the perfect venue. The proscenium arch works well as a frame for a stage empty of everything but a modern red shipping container which unfolds to reveal the treasures inside as soon as the show begins. The set design is by Louisa Adamson and Christian Barry (who also directs), and it’s a clever metaphor for the entire show, for what expresses travel across a vast sea holding the belongings of people on the move better? And what expresses the cultural riches of refugees better than the gifted group of musicians and storytellers that the audience discovers inside? 2b Theatre Company has assembled an extraordinarily versatile group of performers. Mary Fay Coady as Chaya is an accomplished musician on the violin, as is Eric Da Costa as Chaim, on woodwinds. Both actors are charmingly convincing as the young couple. If the character of Chaya seems a bit stereotypical from time to time, Coady imbues her with enough complexity to make a good foil for her ardent lover. Da Costa delights as Chaim, who is not only persistent in his suit for Chaya’s hand, but is also quite willing to share her with her dead first husband, who maintains a relentless grip on the memories and heart of his widow. Other members of this accomplished band include Kelsey McNulty on keyboards and accordion, and Jeff Kingsbury on drums.

But, as mentioned before, Ben Caplan is the performer who holds this feast of riches together. Caplan is already well known as a folk singer/songwriter in and outside his native Canada, but in Old Stock, he shows off his early theatrical training to great effect. Moving effortlessly from master of ceremonies at a music hall to the cantor’s solemnity at a traditional Jewish wedding, his voice moves the audience from laughter to hushed celebration without missing a beat. Playwright Moscovitch is also to be congratulated on writing a script – a very personal script, since this is the story of her great-grandparents – that gives this talented company so much to work with. Do take the opportunity to see this wonderful show.