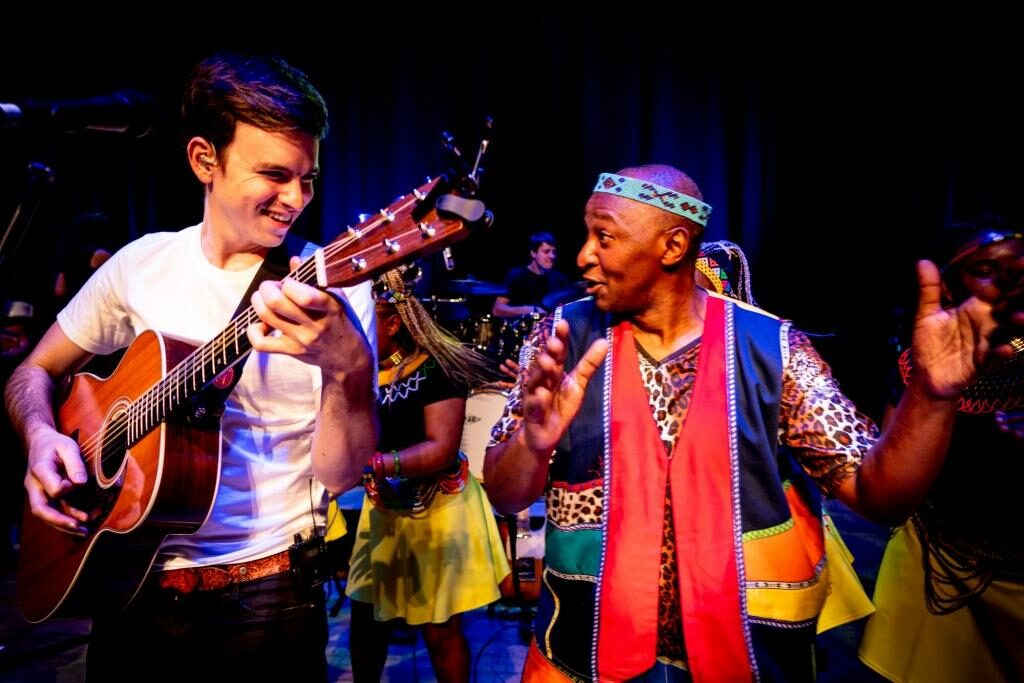 For many adults and indeed children of the 1980s, Paul Simon’s Graceland album remains iconic. Hits such as ‘You Can Call Me Al’ and the album’s namesake track remain staples on party playlists over 30 years after its release. And for many born long after 1986, the chance to hear the album live would have been unthinkable – especially since Simon’s step away from touring in 2018. Until now.

Maple Tree Entertainment have already found success with The Simon and Garfunkel Story, which now tours worldwide to rapturous audiences, and so it’s perhaps unsurprising that they have continued to mine the clear vein of enthusiasm for all things Paul Simon. Hence this new production, which calls upon the remarkable talents of the UK-based South African Cultural Choir to add the essential vocals so beloved of fans of Graceland – including the remarkable lilting refrains of ‘Homeless’, originally provided so memorably by Ladysmith Black Mambazo.

Fans expecting a repeat of The Simon and Garfunkel story, which deploys singers with at least a passing resemblance to the pair and casts them as actors as well as musicians, might be surprised. This is not quite the same show, and this at first takes some adjustment. Young American YouTuber Josh Turner takes Simon’s part here, and for all that he’s clearly a remarkable guitarist, handling the fast fingerwork of ‘Anji’ with apparent ease, he is no voice-alike of Simon and nor does he pretend to be. This quickly becomes irrelevant, but it’s best to approach the performance as a tribute rather than a likeness.

The shape of the production becomes even clearer when the night opens with ‘Kodachrome’ – an absolute banger of a Simon track, certainly, but not from the Graceland album. Turner explains the format: we’ll hear some Simon tracks in the first half, and meet the choir who’ll remind us just why Simon fell in love with South African township music and went on to make Graceland. In the second half, we’ll hear the Graceland album in full. The audience rustles in anticipation; this is what people have come for.

It’s credit, then, to the virtuoso work of all and especially the SACTUK and its charismatic lead, that the first half is still so warmly received. Gorgeous costumes of coloured beads, neckpieces and rustling skirts set off the astonishing performances from the choir, including the wonderful ‘Shosholoza’ – and in fact, to call this troupe of nine just a choir undersells them, as the dancing on display shows amazing skill and athleticism. And Turner does a great job with some Simon classics and some lesser-known favourites; ‘Homeward Bound’, especially, is heartfelt, and the gradual introduction of choir and full band in ‘Peace Like a River’ works a treat. The closing refrains of ‘The Only Living Boy in New York’, wrapping up the first half, are moving.

Naturally, though, it’s for part two that most have come, and from the opening refrains of ‘The Boy in the Bubble’ the audience melt. This largely seated performance sees everyone on their feet for the irresistible ‘You Can Call Me Al’ with an execution made even more brilliant by the fact that those on stage also seem to be having the time of their lives. Guitar and bass guitar solos taken by Turner’s band are performed with absolute aplomb and clear relish (although the full saxophone solo in ‘That Was Your Mother’ was missed), and rich colours light the stage to mark the warmth of the celebration.

Simon became hooked on South African music after hearing a bootleg cassette, and the rest is history. From the reception to this vigorous, joyful rendition of Graceland 33 years after its release, it’s clear that Simon’s own work, in turn, has hooked generations. Long may it last.

Other recent reviews by Abi: