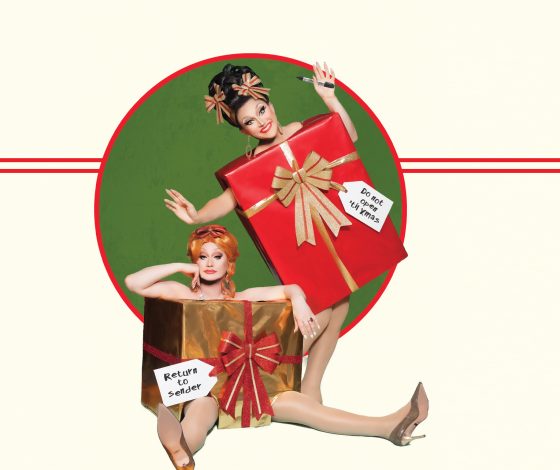 “one of the most outrageous, campy and risqué seasonal shows of the holiday season, and will no doubt put even the biggest Scrooge in the holiday spirit!”

Rising to fame through their respective successes on season five of RuPaul’s Drag Race, Jinkx Monsoon and BenDeLaCreme have teamed up for their second seasonal spectacular. All I Want For Christmas Is Attention has DeLa and Jinkx playing the odd couple, the former hellbent on maintaining the traditions of Christmases past while the latter has a more cynical (and alcohol-focused) approach to the holidays. Through song, dance and innuendo galore, the duo try to work out their differences and discover the true meaning of the festive holidays.

DeLa and Jinkx command the stage and keep the audience engaged throughout the show. The pair’s chemistry is excellent and even slight mistakes or hiccups are dealt with well and played for laughs. The only other character on stage is Nanog, the spirit of DeLa’s late (and slightly racist) Nana who has possessed and speaks through a glass of her famous eggnog. Conversations with Nanog provide some useful breathers for both the audience and the queens as well as practical time for costume changes and stage set-up.

Short infomercial-style videos are played between longer breaks. These show DeLa and Jinkx trying to secure a sponsor for their Christmas show before quickly realising that pretty much every company has blood on its hands. A humorous commentary on consumerist capitalist culture, the videos are also well shot with a clearly high production value.

Parodic songs form the bulk of the show and are as funny as they are clever. DeLa and Jinkx both sing live which is highly appreciated when many drag queens are prone to lip syncing. Songs parodied are both popular Christmas songs and recent chart-toppers. These include a song about being spoiled to the tune of Royals by Lorde, an adaptation of Baby, It’s Cold Outside to become God’s Own Child sung by Mary and the Angel Gabriel and Blame It On The Jews to the music of Lizzo’s Juice. The show closes with a song about how we are all bonded by trauma and stress during the festive period.

Other entertainment includes a comical dance to Sugar Plum Fairy while the pair are dressed as Santa and his sack, and Jinkx sharing ‘holiday snaps’ with the audience which are in fact stills from the 2019 horror film Midsommar about a violent cult.

DeLa and Jinkx wear a fabulous array of costumes. Opening the show in matching red and gold bow dresses, the duo wear everything from a dress that makes DeLa look like a giant floating Santa face, a Menorah-inspired headpiece and Star of David dress, showgirl-style pink sparkly numbers, and a sack that tears away to reveal a Christmas tree dress. You never know what the queens are going to come out in next which makes the performance all the more exciting.

The set is simple with a table with Nanog to the left and another set of table and chairs to the right. The large screen used to project images and play videos hangs above the centre of the stage. Some more Christmas decorations on the stage such as tinsel, fairy lights or even a tree would have given the set an extra tszuj, but the show itself more than makes up for this. The lighting is not particularly noteworthy except some poorly angled and blinding strobe lights that go out into the crowd.

All I Want For Christmas Is Attention is an excellent follow-up to BenDeLaCreme and Jinkx Monsoon’s highly successful Jesus, Thanks for Everything last year. Their new production is sure to be one of the most outrageous, campy and risqué seasonal shows of the holiday season, and will no doubt put even the biggest Scrooge in the holiday spirit!