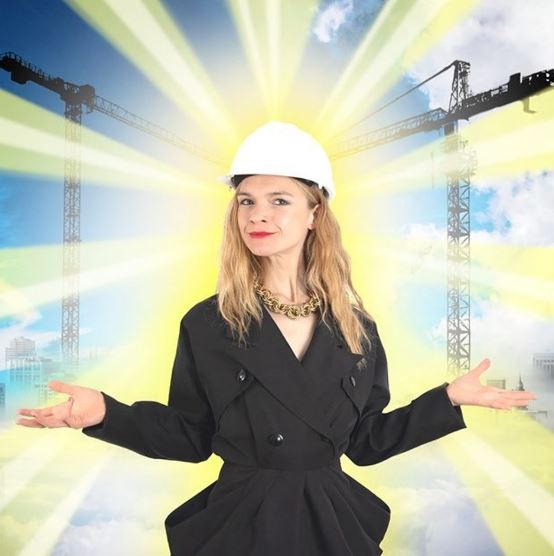 “Gwilliam clearly has a nose for satire, but this seems more like the seedling of an idea for a show”

It often feels like nothing is sacred in London, out with the old and in with the new shiny skyscraper filled with fancy businesses and wildly unaffordable sushi restaurants, and so on.

Frankie Foxstone (Amy Gwilliam) is a property developer, entrepreneur and financial guru, planning on knocking down the Waterloo vaults and replacing them with such a building, and she’s looking for new investors. Donning hard-hat and heels, she shepherds her potential investors, the audience, about the tunnels, talking us through the steps to success for such an endeavour.

Frankie is painfully well rehearsed in that politician style of rolling up your sleeves and talking to the locals. A lot of the delivery is funny because it so closely mimics the genuine behaviour of such a person in real life, reminiscent of Brass Eye or The Day Today.

The premise is strong, and Gwilliam is fast on her feet, encountering a lot of heckling from passers-by and incorporating it seamlessly in to her act. Unfortunately, there isn’t much content, and Gwilliam relies almost entirely on her character development, which would be fine if it were a five minute sketch. But following her around for fifty minutes in the cold whilst nothing much happens, my patience wears a little thin.

She edges towards something a little more meaningful when she has everyone line up in ascending order from the ‘haves’ to the ‘have-nots’, though this is actaully deeply uncomfortable and not really the best way to force a conversation with a bunch of strangers.

Gwilliam clearly has a nose for satire, but this seems more like the seedling of an idea for a show. I’d be interested to see it developed in to something with more of a narrative.