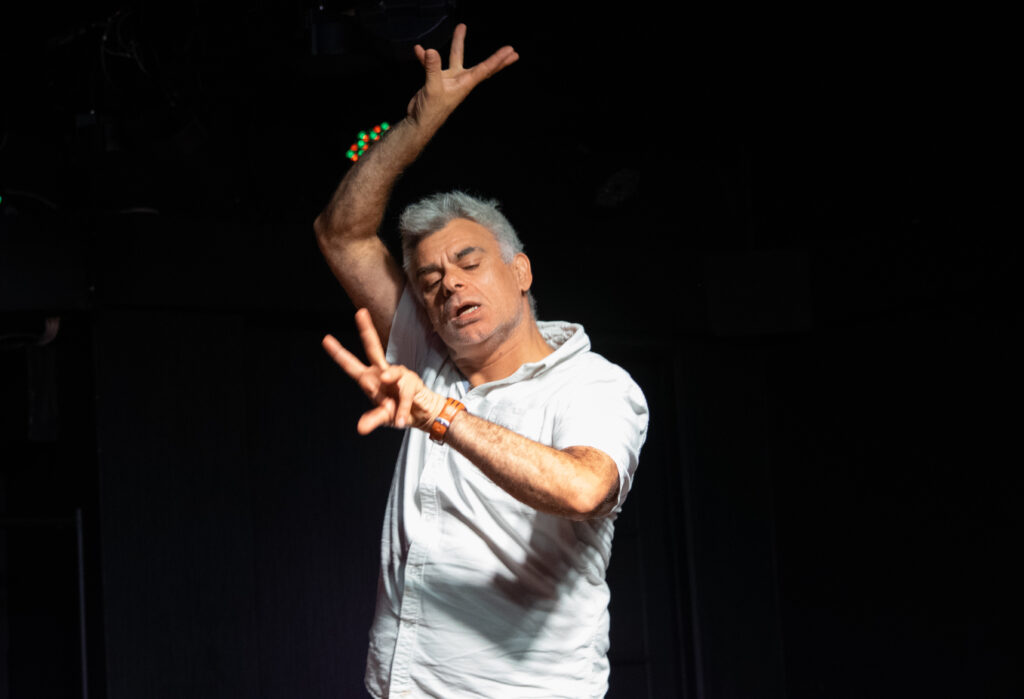 Living With The Lights On

Mark Lockyer’s one-man show is an extended story; one from his own life, told in episodes of ascending dramatic intensity. It is, simply, the story of his descent into severe manic depressive illness. At the show’s beginning, we see him as a successful young actor in the 90s, performing Mercutio for the RSC in Stratford. By the show’s end, he has spent time in Belmarsh Prison. It is, at one and the same time, both an extraordinary story and an ordinary one. Severe mania leads to extraordinarily dramatic behaviour, well beyond the parameters of everyday life, and yet the 2014 UK-wide Survey of Mental Health and Wellbeing’s findings gave the figure as 1.3 million bipolar sufferers in the UK. That’s 1 in 50 of us. So not so extraordinary after all.

Lockyer is a brilliant technician, and was clearly shaped as an actor in a different time. He has a rich, clear, sonorous voice, which could reach the far corners of the Olivier with no problem whatsoever, and is a true shape shifter, adjusting his voice, face and physicality on the turn of a dime to embody the numerous characters who people his personal drama: doctors, lawyers, prison guards, travel agents, girlfriends, etc. etc. His energy is ferocious and we are galloped through the narrative at breakneck speed; 75 minutes passes in a flash and there simply isn’t time to be bored. He has us securely in his hands throughout and gives a performance of enormous dexterity and skill. There is plenty of laughter too.

And yet. And yet somehow that consummate performative confidence slightly takes away from the power of his story. It never really penetrates the audience, or moves us in our gut. Perhaps this is how it has to be, when recounting such a profound level of personal trauma; perhaps the artifice of the performance enables it to be told without triggering that trauma all over again. Which is something that must be respected. But this reviewer couldn’t help wanting a bit more intimacy, in keeping with the small space.

That said, it was an enormous pleasure and privilege to see a performance of such quality in a brand-new local theatre. Opening a new theatre in 2020 is a hugely courageous and optimistic act; its opening couldn’t have been better served than by Mark Lockyer’s brave and hopeful personal odyssey.

Living With The Lights On