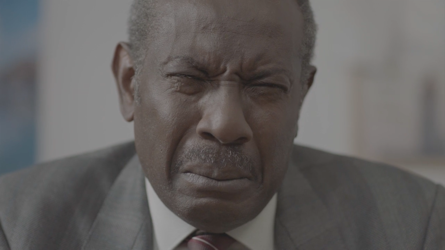 Sometimes art ends up being startlingly present by accident. Perhaps with how the pandemic seems to have exposed and exacerbated every issue rooted into society, these accidents have been happening more and more frequently, but nonetheless People Show 138: Last Day lands on screens at a prescient moment despite being filmed before lockdown.

This short film from People Show focuses on HR Manager Sidney (Tyrone Huggins) dealing with psychological onslaught of having to make his staff (an ensemble of thirty excellent performers from the University of Roehampton) redundant. As he recounts how he hired his employees, helped them grow, and gave them a voice in the company, the emotional burden of having to now take their jobs away from them consumes him. The guilt is deepened as Sidney is at the same time taking a huge retirement bonus after thirty years at the company, forcing him to grapple with the consequences of whether to serve the interests of the company or its minimum-wage employees.

Writers Gareth Brierly and Fiona Creese, who also directed and assistant directed respectively, expertly employ a number of surreal elements to dramatise Sidney’s burden, such as his employees all handing him clocks to signify how their futures are literally in his hands, or the company’s management board being depicted by villainous sock puppets. These moments help to make the film feel less heavy and elevate the emotional repercussions to corporate actions – a relief as without them there probably wouldn’t be much difference between watching Last Day and just turning on the news.

The film knows when to pull away on surrealism and let reality speak for itself too, aided by Huggins’ weighty performance, Rob Kennedy’s punchy editing, and Jonathan Bloom’s crisp cinematography. The interjection of these grounded moments punctuate the film superbly, delivering a nuanced exploration of the responsibility put on low-level managers to bear bad news while higher-ups never have to face the trauma they cause.