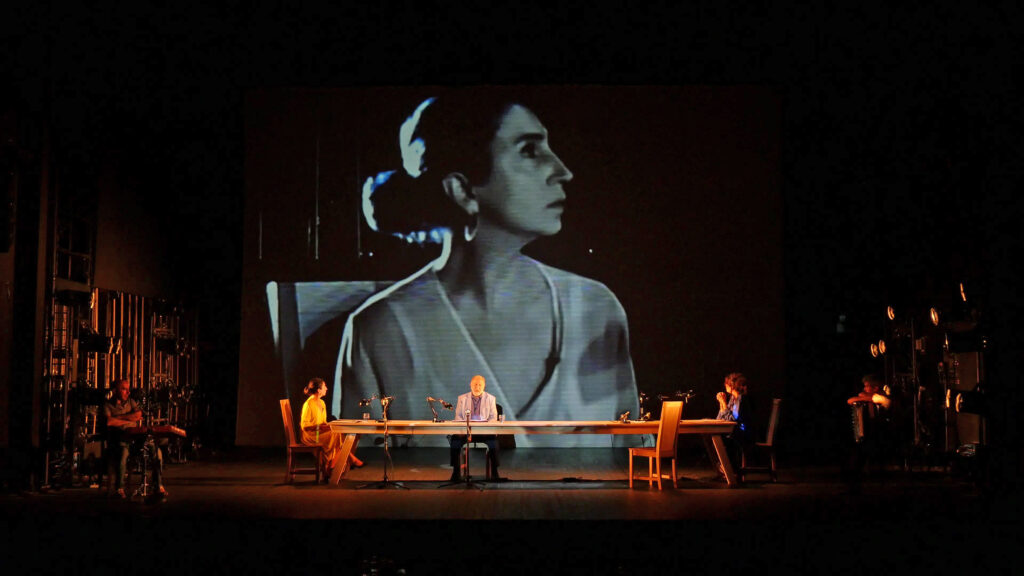 “Rather than a piece of theatre, it has more the feel of an art installation that we would like to wander in and out of at leisure”

“A Letter to a Friend in Gaza” ends with the Israeli filmmaker, Amos Gitai, reading a letter written by Albert Camus during the Occupation in 1944. In Camus’ words, the letter (written to a ‘German Friend’ who had had become a Nazi) was intended as a ‘document of the struggle against violence’. Seventy-five years later, recited in Hebrew, the resonance echoes powerfully in Gitai’s innovative production at the Coronet Theatre. Highlighting the Israeli-Palistinian conflict, this multimedia show demonstrates the universality of the struggles, dating back to the Romans and spanning nearly two thousand years.

This is no documentary, though, but a series of snapshots from the heart, caught in music and poetry. Dominated by the writing of Palestinian poet Mahmoud Darwish it includes the words too of the Israeli S. Yizhar and the Israeli Arab writer Emile Habbi, among others. What the writers share is a fatalistic conviction of how one who has nothing to do with politics can be drawn into it. This production, thankfully, avoids that and concentrates on the emotion rather than drawing us into any political debate.

The poems are read onstage around a table by Clara Khoury, Makram J. Khoury, Yael Abecassis and Amos Gitai himself. Two Palestinians and two Israelis respectively. I say respectively though it is almost impossible to be absolutely sure from the readings – but that is quite possibly the point to be made: that it doesn’t matter – we are essentially all the same anyway. Read in Hebrew and Arabic, the reliance on the projected surtitles diminishes as you become submerged into the rhythm and musicality of the language; complemented beautifully throughout by three musicians who play around, behind and in front of the cast, weaving moments of pure magic between the words.

Alexey Kochetkov’s lonely violin begins the evening. A sparse, yearning sound that builds into a multi-layered conflict of harmonies and glissandos. Bruno Maurice strides the stage, the plaintive notes of the accordion wafting over us in his wake, while Kioomars Musayyebi anchors the sound in the Middle East on the santur – or dulcimer. Individually or collectively, the musical accompaniment is the real heart of the evening. An evening that ultimately feels a touch longer than the ninety minutes running time. Rather than a piece of theatre, it has more the feel of an art installation that we would like to wander in and out of at leisure. The intermittent back projections of news and archive footage were, if not unnecessary, a distraction at times. Yet it was the charisma of the actors and musicians that pulled focus.

You may not come away from this performance enlightened or any the wiser about the conflict, but you are aware that your heart has been spoken to directly. You take away emotions rather than thoughts. Is it a one-state or two-state solution? This show doesn’t offer answers, it is far more universal. It offers reflections. No sides – just mirror images of each other – opposite yet identical.

The Coronet Theatre until 23rd November 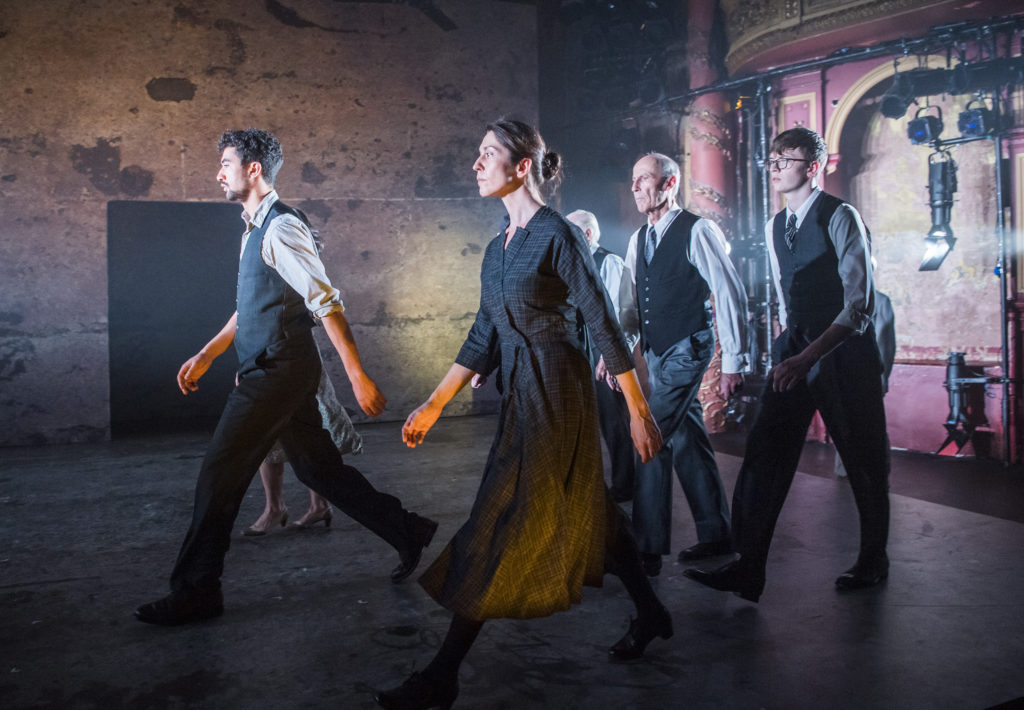 Print Room at the Coronet

“A trust in Camus runs through the piece, but Okri is also unafraid to interrogate him”

We are going to die, all of us, no matter who we are, no matter what we try. This is true. In the knowledge that our fates our sealed, and given the constant humiliation of living, the only question is why carry on at all, let alone struggle? This is the central problem of absurdism, the strain of existentialism developed by Albert Camus; the conclusion of Meursault – the disconnected protagonist of his most celebrated novel – is that there is no reason. And yet he carries on existing. Roaring with the urgency of the original, Ben Okri’s adaptation of L’Étranger for stage demands that once more we face its shattering questions.

His mother dies, but Meursault cannot recall when, let alone how old she was. He is uninterested in seeing her body, smokes and drinks coffee in the presence of her coffin, and falls asleep at her funeral. For him these facts are as irrelevant as whether or not he even loved her (though, he supposes, he probably did). There is no spite in his heart, only indifference, and incomprehension at the values of others. Though he is casually happy in the arms of his girlfriend (who, he supposes, he doesn’t really love), or watching films, or swimming in the warm seas off the Algerian coast, his inability to engage in society’s fictions condemns him. It condemns him when he doesn’t cry at his mother’s funeral, when he shows no concern at his neighbour beating a woman, when he displays no interest in career or marriage, and ultimately when he kills a man.

To translate such an austere, interior novel to theatre requires a unique intuition into its ideas, and Okri displays nothing less. As a starting point, he samples directly from the original text, allowing Meursault’s monologues to cut right through each scene. Not only do Camus’ words serve as an anchor to the piece, but the manner in which they are used immediately isolates Meursault. The world is made to appear as trivial to us as it does to him, often to the point of hilarity. Okri generates a dream-like environment, beyond which we too would only see him as the outsider.

A trust in Camus runs through the piece, but Okri is also unafraid to interrogate him. On the subject of the murdered man, a nameless Arab (referred to exclusively as “the Arab” in the novel), Okri seems uneasy with Meursault’s -and possibly Camus’- disposal of him as a tool to reaffirm the former’s humanity. In a political climate replete with anti-Islamic sentiment (and given Algeria’s own fractious past), Okri has explicitly expressed the desire to give the murdered man agency. Rather than significantly alter the narrative, however, the man returns as a ghost at Meursault’s trial. In this way Okri extends to him Camus’ universal philosophy rather than – as Meursault later says about himself – excluding him from the proceedings. It is not a rebuttal of Camus but a dialogue, and one that serves to strengthen the piece’s resolve rather than diminish it.

Led by Sam Frenchum’s Meursault, in two hours not a single beat is missed by the cast. Every actor’s performance is a keystone in Camus and Okri’s towering theses. In such an essentially collaborative effort, singling out performances may be a hollow gesture. Nonetheless, it is the furious dialogues of David Carlyle, Tessa Bell-Briggs, and John Barrow in the second act’s courtroom scene that distils the strange logic surrounding Meursault (in spite of his guilt) into a final, terrifying conclusion. Meanwhile Frenchum manages, impressively, to capture both Meursault’s detachment and the strange empathy he evokes; the enormity and the comedy of absurdism both haunt his withdrawn expression. The pace of each scene is erratic -some quick and matter of fact, others lingering past the point of meaning – but Meursault’s calm is constant. The spacious, sparse set, often only lit by a single beam of light seems to reflect his mood and though the piece is full of action, his stillness overwhelms.

As brutal as the core notion of absurdism appears, and as nihilistic – perhaps even as immoral – as Meursault may seem to be, Camus’ final argument is one of breathtaking optimism. The very idea skewers the trivialities of modern existence, summed up by Meursault’s refusal to engage meaningfully with them. This does not mean that the trivialities have no consequences, but only from a position beyond them can a person ask the question, is life worth living? In both L’Étranger and his classic essay The Myth of Sisyphus, Camus concludes that, although our fate may be determined, perhaps even because of it, we are uniquely free to build our own meaning of life. Perhaps then, for the first time, we can really live.

Okri’s adaptation is both a questioning and an answering of this argument, and by returning to it now, he reaffirms my suspicion that in such obviously absurd times, the inherent absurdity of choosing to live becomes all the more important.

Print Room at the Coronet until 13th October

Based on the work of Albert Camus