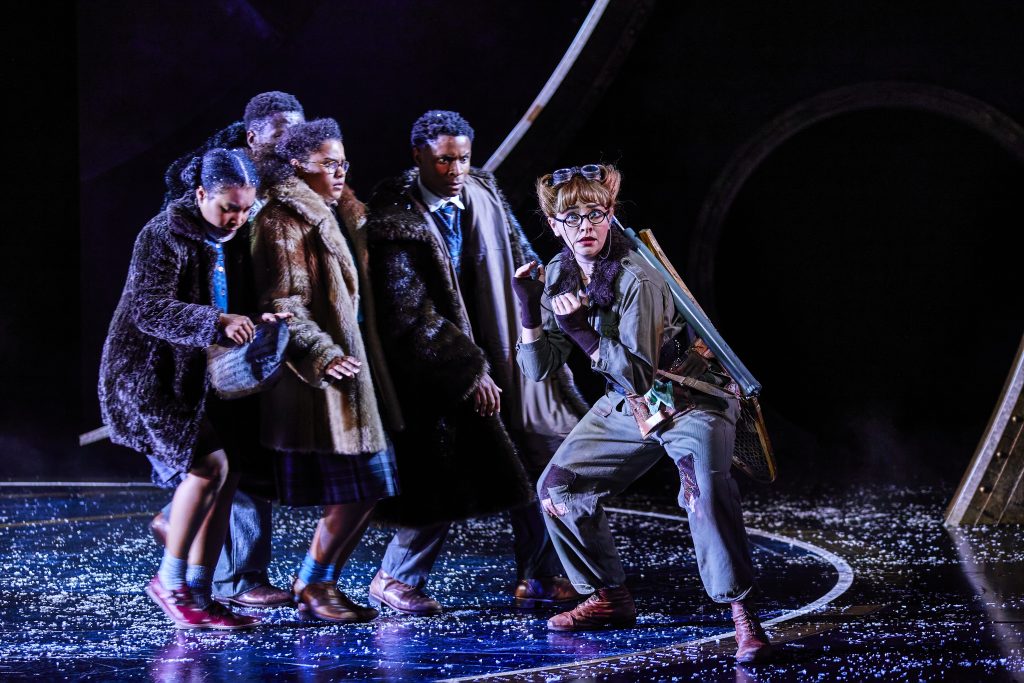 “Samantha Womack’s ice-queen witch stops short of caricature to give a cool, sassy and sexy performance”

The temptation to litter this review of “The Lion Witch and the Wardrobe” with spoilers is almost impossible to resist. Except that the protectors of the ‘Magic Circle’ would soon come knocking. Needless to say, Michael Fentiman’s stage adaptation is, in plain language, truly magical. Literally, emotionally and visually. Escapism personified.

We enter a war-torn Britain circa 1940. A lone pianist is gradually joined by the full ensemble while the melancholic strains of ‘We’ll Meet Again’ crescendo in beautiful harmony. This in turn gives way to the blitz and the exodus of London’s child population. Among the throng are Peter, Edmund, Susan and Lucy Pevensie, who are whisked away to Aberdeen and the forbidding, country house of the eccentric Professor Kirke. You know the rest – besides which, the title says it all.

Fentiman’s unique stamp is visible from the outset, with the cast comprising actor-musicians that conjure echoes of his ‘Amélie the Musical’; with soaring notes of Cirque du Soleil and knowing winks to Emma Rice. Throw in a touch of ‘Wonderville’ and the picture is complete. Tom Paris’ outstanding costume, with Toby Olié’s puppetry, are not just the icing on the cake, but crucial ingredients; as are Jack Knowles lighting, and the shattering soundscape provided by Ian Dickinson and Gareth Tucker. Although it cannot quite be described as a musical, Benji Bower’s and Barnaby Race’s score runs through it, frequently bursting into full blown choral numbers, around which choreographer Shannelle ‘Tali’ Fergus has staged some beautifully poetic, stylised and devilishly stylish movement.

As always, it is tempting to over-read the allegories. But the story does resonate particularly vibrantly now in its celebration of the coming together of individuals to overcome the darkest of winters. Narnia has been frozen for the past hundred years by the White Witch (Samantha Womack). Delainey Hayles’ Lucy is the first to stumble through the wardrobe into the forbidding kingdom, before persuading her siblings (Ammar Duffus, Shaka Kalokoh and Robyn Sinclair) to ‘believe’ in Narnia and join her. Can they overcome the usurper witch and restore the rightful ruler – the Christlike Aslan?

Well, we all know the answer. But it is the journey that leads us there that is the crux. Jez Unwin’s Mr Tumnus is the first to dole out lessons in betrayal and forgiveness, while the glorious pair – Julian Hoult as Mr Beaver and Christina Tedders as Mrs Beaver – dish out their unique blend of comic relief. Chris Jared, disconnected from the imposing puppet, is the impressive and magisterial voice of the lion, Aslan, while Samantha Womack’s ice-queen witch stops short of caricature to give a cool, sassy and sexy performance. The ensemble stops short of upstaging the protagonists, instead surrounding, infiltrating and complimenting the action with perfect precision and timing.

The story is timeless, a quality reflected in the fantastical nature of this staging. It transcends the family show boundaries often imposed on this genre of theatre. There has to be a sufficient amount of darkness for light to banish it. We’ve been through some pretty shadowy times of late, but it serves to magnify the hope and redemption we grasp afterwards. “The Lion Witch and the Wardrobe” is a show that exemplifies that. And it throws in all the eccentricities of life too.

Escape through the wardrobe and watch with an open mind. That way you will let all the wonder in. 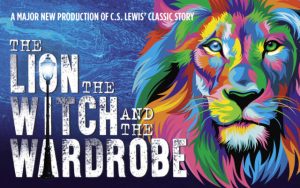 “a really exciting piece of interdisciplinary work that melds film, dance and music in a mesmeric and moving work”

Three layers of gauze split the stage, and as the music begins, so does the film. Sweeping landscapes, and gradually, a single figure. ‘TOM’ is, says its creator, about how we feel the need to project a version of ourselves to society as we grow up, and about the parts of us that we leave behind in childhood. Created by Wilkie Branson, the piece is a fusion of dance and film, a marriage that Branson feels is completely natural, given that dance is about movement, and film is about capturing the moving image.

This is an incredibly technically demanding piece. Projected across the three gauze screens, the film itself is created in layers, the result of which is a 3D effect. Branson has made 85% of the visual in the film out of models which he transfers into this space using photogrammetry, in a process that involved over 200,000 photos. The piece skates between spaces: the claustrophobia of tube carriages and the endlessness of the edge of a cliff. The figures are filmed against green screens, and inputted into this 3D space. A particular highlight is a fluorescent elevator, floating against towering city blocks, a surreal beacon of emotion in the muted grey urbanity.

Benji Bower’s compositions in tandem with Mat Clark’s sound design is truly stunning. The music moves from heavy beats to sweeping strings, instrumental then later vocal. This is a score curated with the utmost skill, and its relationship to and clear understanding of the visual element of the piece is magical to experience.

The dance when it comes, is beautiful and emotive, and it’s a context in which we do not usually see breakdance which makes for a really interesting effect. My only qualm is that I wanted more of it. Moments that felt like they might have been launchpads into longer segments of dance then peter into something else. Branson expressed a desire to add a live dance element to the piece in future iterations of it, and this is something that would really help this and I look forward to seeing it materialise.

The final section feels unnecessary and strays into a wooly sentimentality. The rest of the piece has said enough.

This is a really exciting piece of interdisciplinary work that melds film, dance and music in a mesmeric and moving work.