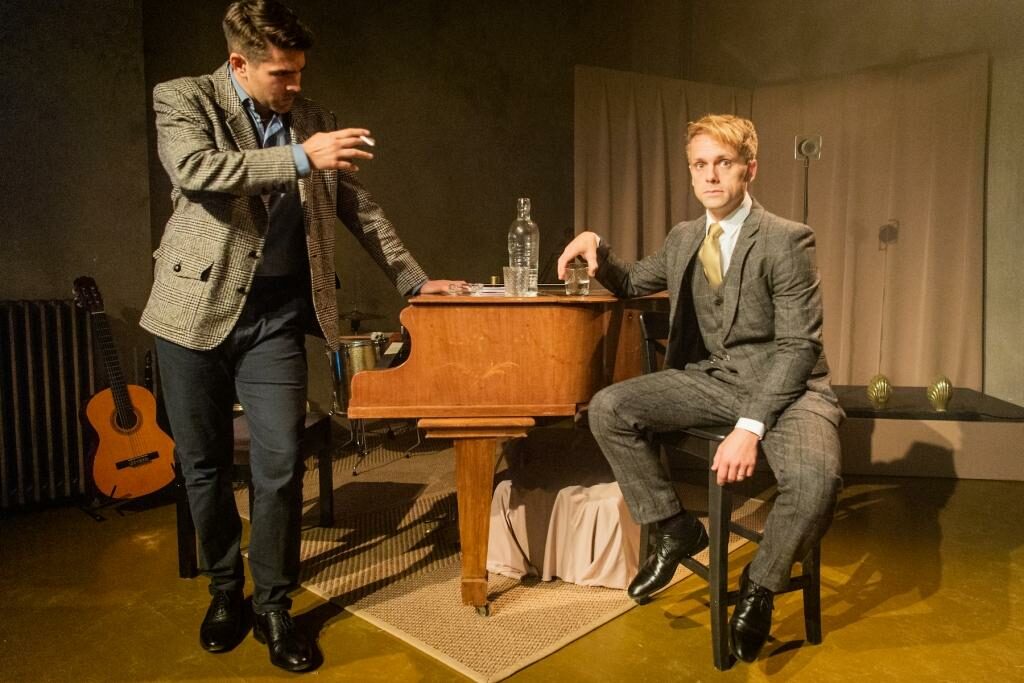 “The New Yorker called him a 44 year old unemployed screenwriter from a forgotten era. The Jazz Age, they called it.” So says Ernest Hemingway about his friend F. Scott Fitzgerald in Allan Knee’s new play, The Jazz Age. It’s a quote dripping with delicious irony, as neither Fitzgerald, The Jazz Age nor Knee’s tribute of the same name are in any way forgettable.

The play follows the lives of the two writers who arguably encapsulated The Jazz Age more than anyone else – Hemingway (Jack Derges) and Fitzgerald (Robert Boulter), as well as Scott’s wife Zelda Fitzgerald (Hannah Tointon). Set mostly in Paris during the Roaring Twenties, the story closely recounts the tale of the trio’s young lives, particularly focusing on the complex relationship between them. Beginning with Scott’s scouting of Hemingway and Scott and Zelda’s whirlwind romance, the narrative continues with Hemingway’s rise to fame, Scott’s downwards spiral into self-pity and alcoholism and Zelda’s ever loosening grip on her own sanity.

Scott credits Hemingway as “holding a mirror up to the world and writing what you see,” a metaphor which also applies here – the story is written with clarity and panache whilst the attention to detail is absolutely spot on. From the moment the audience enters they are transported into a twenties Parisian Jazz club, Darren Berry’s three piece band enticing them in with sultry, buttery-smooth tones whilst Gregor Donnelly’s grandiose design wows them. Cabaret tables peppering the front row are a particularly pleasing touch – what better way to immerse the viewer into the play’s world than to make them part of the set?

As one might expect, the music is part of what makes The Jazz Age such a joyously stimulating experience – like icing on a cupcake, you’d notice if it wasn’t there. Never superseding, it is woven into the fabric of the play and evolves with the scenes it introduces – sometimes upbeat and fun, sometimes gentle and beautifully wistful. Its utilisation for changes in setting allows the story to seamlessly flow whilst making sure that classy Cabaret atmosphere never slips.

The stars of the show, however, are the characters themselves. Jana Robbins and Anthony Biggs’ direction is jaw-droppingly masterful – this is as close as you’re going to get to seeing Scott, Zelda or Hemingway actually come back to life. Boulter’s Scott is initially cocksure and arrogantly naïve, particularly apparent in his brazen forwardness towards Zelda during their first encounter, however Boulter’s transformation into the hollow, quivering spectre Scott becomes later on is measured impeccably and heart-breaking to witness. Tointon beautifully embodies the flapper girl Zelda, moving playfully yet gracefully and truly bringing the rhythm of the music to life. It is never one note however – Zelda may at one point be oozing with seductive charm and then suddenly switch into a complete manic breakdown, making her mesmerising to watch.

Derges’ Hemingway is quite simply breathtaking. Seldom have I seen an actor master the dry wit in a play like Derges does here. Every savagely witty putdown is timed effortlessly and laced with a palpable weariness and nonchalance. Hemingway’s overt machoism is never shied away from either and his cool confidence contrasts spectacularly to Scott’s nervous energy. The friendship between the two writers is definitely the most believable part of The Jazz Age and is what makes the final moments so beautifully poignant.

What’s really great is that you don’t need to know anything about the actual lives of these characters to feel a deep affinity with them. You can simply sit back, let the music seduce you and enjoy being whisked away to The Jazz Age for one evening. I urge everyone to go and watch it – it’s sublime.

The Playground Theatre until 19th October