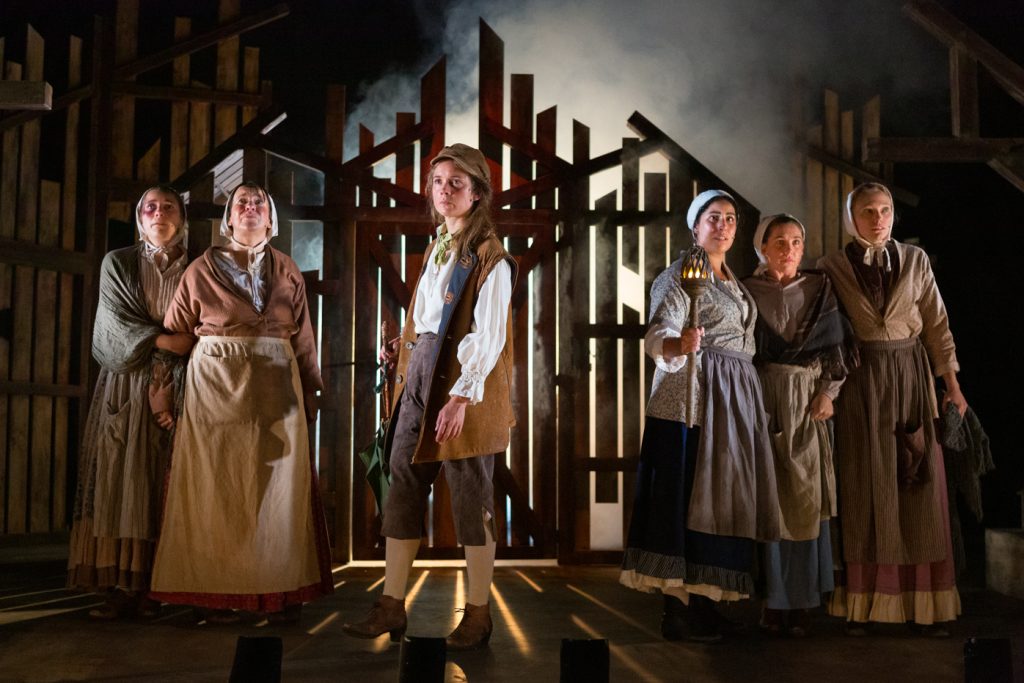 “An undoubtedly compelling and timely story, told with a fine balance of edge and heartiness“

“It’s been a year since I died and still nobody’s found me.”

There’s a reason murders are generally told from the perspective of the murderer, obviously because the victim isn’t there to tell it. So Beth Flintoff’s The Ballad of Maria Marten is necessarily told from the grave. Based on a true story, Maria Marten herself guides us through the loves, heartbreaks and societal failings that led to her violent death.

I’m embarrassed to say I had never heard of Maria Marten, or the Red Barn murder as it’s otherwise known. Particularly so as that’s where my partner is from, and apparently that’s what the tiny village of Polstead is largely known for. That and cherries.

In fact, it’s been a popular story since the days of the trial in 1827, with songs written about it- one by Tom Waits- and multiple TV, film and radio adaptations. But under Hal Chambers’ direction, this production has taken a lot of risks in order to contemporise, the first and most overt being there are no men in the cast. Not only that, whilst Maria’s former lovers are played as bit-parts by the all-female cast, William Corder doesn’t even get a look-in, remaining an off-stage character throughout. This is especially interesting because, as with most tales of murder, adaptations and retellings have been largely focused on him over her.

Accents are all over the shop which does get to be quite distracting- there’s a little west country, a little generic northern, some south London, even a bit of Irish, often combined in a single sentence. But the performances themselves are generally strong. The cast at their most powerful as a chorus: As the title suggests, the story is punctuated with ballads, sung in tight six-part harmonies. These are some of the tenderest and most affecting moments, giving the sense that whilst women like Maria have been largely lost to history, there is in their place a kind of communal voice of mourning. This is amplified by synchronised intakes of breath that feel as though Maria’s plight belongs to a multitude.

I have a bit of a bee in my bonnet about adults playing children, and there’s a lot of it going round at the moment- The Book of Dust at the Bridge Theatre comes to mind, with a twelve-year old being played by a twenty-something. I do see the necessity in this case: they’re children for very little of the story, so it’d be a waste to double the cast. Regardless, it’s near impossible to do well and feels a bit embarrassing.

Verity Quinn’s costumes and set are kept fairly traditional: a dilapidated barn wall looms over the stage throughout and the cast all sport bonnets and aprons. The story’s contemporary slant generally sits comfortably against this conventional backdrop, but there is some anachronism that doesn’t feel quite right. One of the characters, for example, is an empowered woman who loves sex and whose children each have a different father. I understand the impetus to modernise in this way, but it feels particularly bizarre given that Maria suffers the harsh judgement of the village for having children out of wedlock herself.

The ending too feels uncomfortably positive, where a more truthfully bleak conclusion would have better served the point of the story. That being said, it’s hard to keep an audience hooked when they know from the get who was murdered and, half-way through by whom, which this production does. An undoubtedly compelling and timely story, told with a fine balance of edge and heartiness. 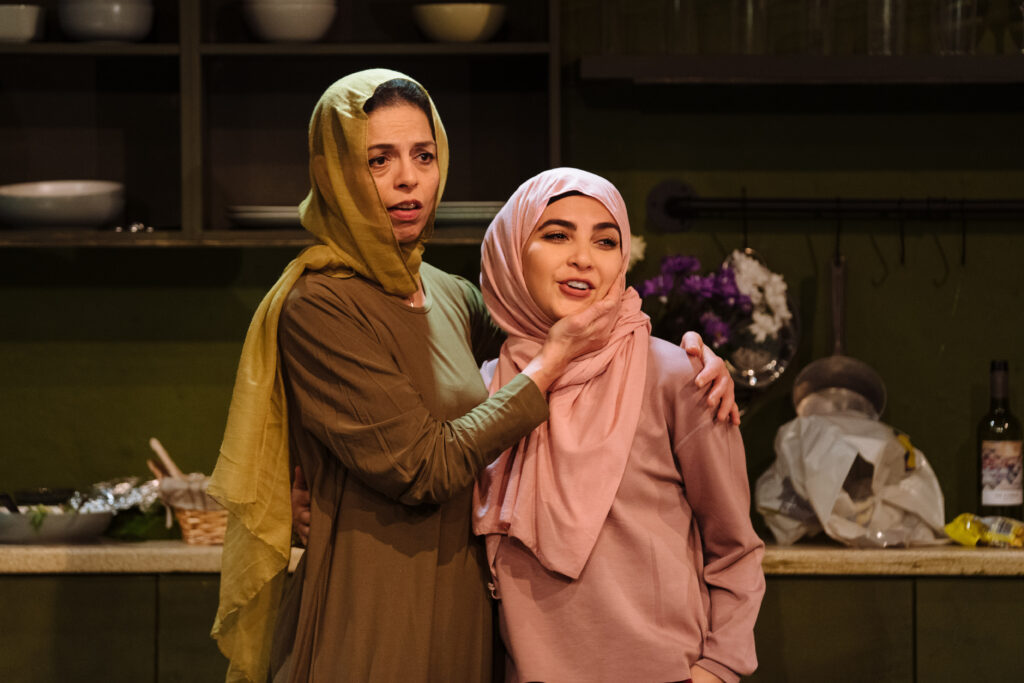 Out of Sorts is the winner of Theatre503’s International Playwriting Award 2018. Written by Danusia Samal, it tells the story of Zara, a young woman caught between two cultures. Raised Muslim in London, when Zara got to university she quickly learned to adapt in order to fit in with her overwhelmingly white classmates. Now living with her best friend and flatmate Alice, Zara is the typical millennial: she parties, she drinks, and she wants more from life than marriage to a Muslim man. On the other hand, when she visits her family, she reverts to the good Muslim daughter, wearing her hijab at dinner and saying the prayers. On the surface it may seem that Zara has it all worked out, and it’s simply a matter of code switching. But the truth is that identity is messy, and the stress of being split in two this way, between two worlds, neither of which fully accept her, has its cost.

Directed by Tanuja Amarasuriya, Out of Sorts is a heartfelt story of identity and belonging. Samal’s smart, insightful script cares deeply about its characters, all of whom are layered and complicated. Samal shows impressive skill in her ability to balance lightness in her writing with the heaviness of her subjects. The play, which confronts racism, privilege, mental health, and eating disorders, is also touching, delightful, and laugh out loud funny. And although the script may allow itself a few too many speeches, the show never feels long.

Myriam Acharki (Layla, Zara’s mother), is particularly deft in her grasp of her character’s sadness and pain, but also her quite sly sense of humour. Nayef Rashed (Hussein, Zara’s father), likewise brings much of the comedy to the play. Oznur Cifci nails the part of Zara’s sharp-witted, ‘hood rat’ little sister Fatima. Nalân Burgess (Zara) gives a good portrayal of someone barely holding things together. Emma Denly (Alice) is spot on as Zara’s well-intended but privileged and condescending flatmate. Claudius Peters (Anthony) is earnest and convincing as Alice’s boyfriend, who is unfortunate enough to get caught in the avalanche of the girls’ collapsing relationship.

The show has one set, which is used to portray both Zara and Alice’s upmarket flat, and Zara’s family’s council estate flat. What may seem like not an ideal choice, made to accommodate Theatre503’s small space, works better than you might think. A change in lighting (Ali Hunter) is surprisingly effective in morphing the atmosphere. The characters from Zara’s two worlds often overlap in the room, which suggests that perhaps Zara isn’t doing as well as she thinks at keeping her two identities apart.

Out of Sorts makes a powerful argument for open and truthful communication, no matter how difficult it may be. All of Zara’s secrets that she keeps from her friends and family, and her attempt to handle her problems alone, result in a huge mess, both literally and figuratively. The play is clever in getting us to re-examine our own perspectives, and remember that what we see of someone’s life is never the full story. Samal is loving, perceptive, and precise in her championing of people from two cultures who feel like they don’t belong to either. It’s important now more than ever to centre stories like Zara’s. Don’t miss this hugely enjoyable, eye-opening show.