A Hero of our Time

“the performances burn with an energy that transfixes throughout”

Since March, and I’m far from alone here, the only theatre I have been able to witness has been either beamed through a computer screen or, more recently, outside under our unpredictable skies. Consequently, one is bound to carry a heightened sense of expectation when returning to an indoor space for the first time. Any concerns, though, that these expectations are not reached are swiftly thwarted by HUNCHTheatre’s impassioned and inspired adaptation of Mikhail Lermontov’s “A Hero of Our Time”.

Having enjoyed critical success in Edinburgh and at the Arcola Theatre in 2018, it now comes to the Stone Nest: a former, nineteenth century Welsh Chapel tucked away on the corner of Shaftesbury Avenue. From the eighties it was the home of the infamous Limelight Club until it became just a pub; but for the last decade has stood empty. Until now. With its Norman style gallery and grand dome, it seems an appropriate space for presenting the moody, melancholic thoughts of Mikhail Lermontov. “A Hero of Our Time”, Lermontov’s final prose work, focuses on the anti-hero Pechorin whose tragic demise foreshadowed the author’s own death during a duel.

The romanticism of the setting, however, is outweighed by the somewhat poor acoustics of the church. However, Oliver Bennett and Vladimir Shcherban’s adaptation is inventive enough to be able to dispense with the backdrop and rely purely on their dramatic achievement. The writing is skilfully modern, and the performances burn with an energy that transfixes throughout. Bennett, as Pechorin, embodies the nihilistic intensity mixed with the melancholic sensitivity of the Romantic hero. The rich tones of his voice frame the aphorisms that are sometimes unbearably cruel, but impeccably aimed to wound his intended target. It is often difficult to feel a real sympathy towards this kind of self-centred protagonist, but Bennett reels us in with his winning charisma.

James Marlowe as Grushnitsky, his long-suffering friend, gives as good as he gets as the two face each other off over the young Princess Mary. Initially the underdog, Marlowe’s stage presence gives a real stealth to the character that ultimately threatens to usurp the hero’s tragic status. The two actors create an electrifying bond; and caught in its crossfire is Florence Roberts who convincingly plays the two pivotal women: Princess Mary, the pawn in the game (but don’t underestimate the power of the pawn!) and Pechorin’s ailing ex-lover, Vera.

The lines are blurred between comedy and tragedy, between the past and the present; but it is clear that we are witnessing a vital piece of theatre here. It exposes the conflicting emotions of the characters as being universal. It is not always comfortable – like biting into a lemon. The bitterness is as immediate as the sharp language of the text. Marred only by a few moments of extraneous physicality, the offbeat and avant-garde permeates the production.

The irony, the insight, the fatalism, the humour, the violence and the love; all embedded in Lermontov’s original, have not been lost over time. This is a show that resonates today just as compellingly; and these actors are the heroes of our time.

A Hero of our Time 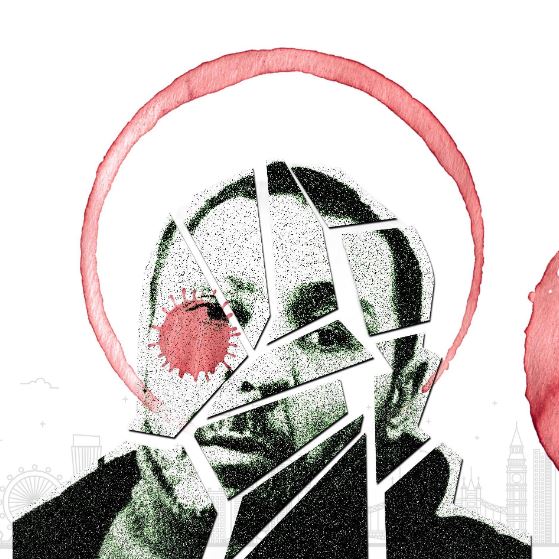 The Legend of the Holy Drinker

“the fragmented nature of the story, combined with a strange separateness, do not make for a satisfying audience experience”

Andreas is on the streets, a real down and out. Then one day he is given a thousand pounds by a stranger, who asks him to repay it to St Theresa in Westminster Cathedral. There are many good things about this tale of a homeless man’s extraordinary experiences, but the play as a whole doesn’t really hang together. It feels more style than substance, and there is way too much ‘drunk acting.’

HUNCHTheatre have created The Legend of the Holy Drinker, based on Joseph Roth’s nineteen thirty-nine original. It is stylised and, at times, well choreographed, but there have been some strange decisions made. For example: the use of microphones is effective in creating sounds and atmosphere and in translating some of the dialogue into English, but sometimes when the actors are using them for speech they look up or away, and the sound fades in and out as they move. Then, at other times they don’t use the mics, so why have them at all? A clever use of a roll out ‘bridge’ a huge semi-transparent plastic curtain and umbrellas create set and enhance the action.

There are some nice bits of interaction, but the heart of the problem is a lack of connectedness between the actors. There are some good individual performances and some shared moments that work, and the cast are clearly talented. But the fragmented nature of the story, combined with a strange separateness, do not make for a satisfying audience experience. I did enjoy quite a lot of it, but by the end I was wondering what the director, Vladimir Shcherban had been trying to do, whether the surrealism in the action was making believable interaction impossible, and when Andreas, played by Oleg Sidorchik, was going to stop stumbling around the stage, drunk. Again. The rest of the cast, Emily Houghton, Ed Davis, Eva Mashtaler and Oliver Bennett all play multiple characters, skilfully moving from one to the next. If the company continue with this play I hope they rework it and find a way to tell what is an interesting story in a more coherent way.