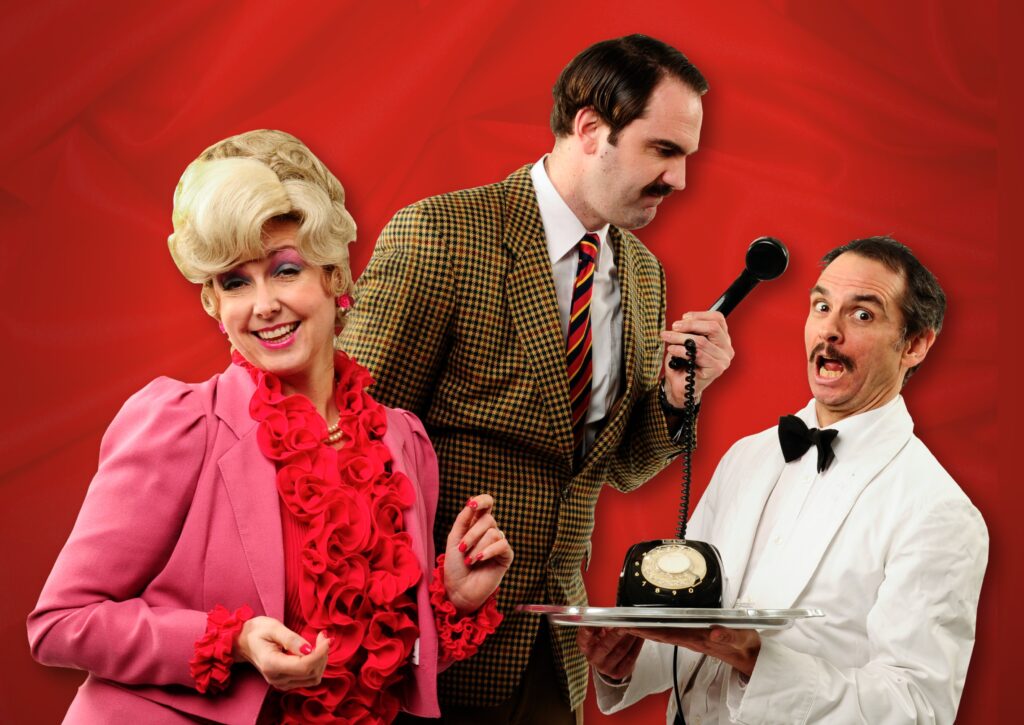 “For fans of the show, this is a definite must see. For fans of good service, perhaps not!”

As this trying year comes to an end, surely, we are all deserving of a night out. And what better way to celebrate than a three-course dinner at the Fawlty Towers hotel! Upscaled from Torquay to the Radisson Blu hotel in London, Faulty Towers: The Dining Experience sees its audience become diners at the fictional hotel and receive the expected questionable service from Basil (Jack Baldwin), Sybil (Katharine Mary) and Manuel (Simon Grujich).

The show naturally has been adapted to be COVID-secure. Guests are ushered into the dining room by Manuel brandishing a feather duster who pushes in your chair far too tight with his foot to maintain social distancing. All characters wear masks and Sybil hands out hand sanitiser upon arrival. Fortunately, the current restrictions do not prevent the show from remaining highly interactive.

Diners are served three-courses of 70s-style grub, starting with a tomato soup, followed by chicken (or pasta), and a lemon cheesecake for afters. The first two courses are accompanied by general havoc – such as Manuel throwing bread rolls to diners – while the desert is enjoyed in peace. The menu feels like a real missed opportunity as the original BBC Fawlty Towers has so many iconic dishes associated with it such as Waldorf salad, duck with orange, and trifle. Serving dishes such as these would have made the experience so much more immersive.

The three-strong cast all did an excellent job at capturing the spirit of their respective characters. Grujich was particularly convincing as Manuel, so much so that it was almost surprising when he revealed his English accent after the show’s end. The cast do well to improvise successfully both amongst each other and with the diners. One particularly good moment was when a guest started choking and Baldwin quickly stood in front of her to avoid upsetting the other customers.

It is a shame that the long-suffering waitress Polly does not make an appearance. Also, the inclusion of a Major trying to be politically correct could have been a humorous addition, especially considering that the BBC temporarily removed ‘The Germans’ episode from its streaming service earlier this year due to it containing racial slurs.

The small cast however meant that much of the production’s comedy relied on misunderstandings between Manuel and the other characters. Amusing as this bit is, the back-to-back skits of poor English did become rather tedious. The show really flourished in its second half where many elements of the show’s loose plot were brought together. Sybil also had a greater presence later on – such as singing an operatic rendition of ‘Happy Birthday’ to various guests – which added variety to the entertainment.

There are several references to iconic moments from the television show such as Basil’s ‘silly walk’ from ‘The Germans’ episode, the proclamation that ‘fish’s off’ in reference to the plethora of duck in ‘Gourmet Night’, and Basil slapping himself silly for being a ‘naughty boy’ as in ‘The Builders’ episode. These scenes were big crowd-pleasers and evoked the most enthusiastic response from the audience.

More inventive prop work would have helped elevate the show. For example, at one point, the audience is informed that a rat is loose in the dining area. Eventually, Manuel pulls out a toy rat from under a table. This scene would have been so much better if some sort of remote-controlled creature had zipped out from under a chair and Basil had had to wrestle it to the floor.

Faulty Towers: The Dining Experience is a unique and joke-filled production. For fans of the show, this is a definite must see. For fans of good service, perhaps not! 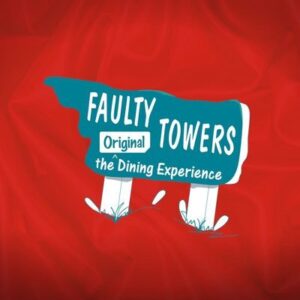 Radisson Blu Edwardian Bloomsbury until March 2021 & touring across the UK