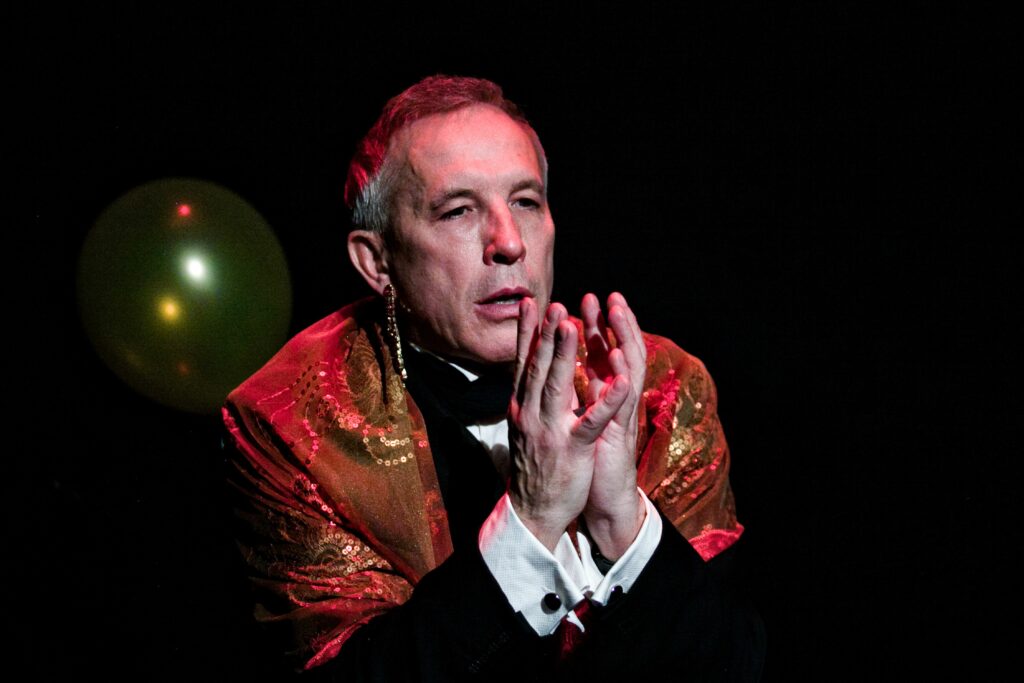 “one of the most remarkable acting performances currently in London”

The Last Act of Harry Houdini does exactly what it says on the tin. Before his flight into the arms of death, Harry Houdini recalls his life and career. This simple concept, neatly directed by Ishwar Maharaj and choreographed by Joan Golden, is but an excuse for one of the most remarkable acting performances currently in London.

Written and played by Barry Killerby, Houdini does not shy away from his obsession with death. On the contrary, death becomes motivation for his greatest acts and tricks. He laughs at people waiting for his failure – and ironically, he himself waits for his own failure. Fervently debunking false spiritualists (that is, all spiritualists), he secretly seems to hope that they are right. All that he wants is to have his beloved mother (for he never mentions his father) to communicate with him – to know that there really is something on the other side.

“I would give up all my secrets for one word from my beloved departed” says Houdini. And we believe him – obsessed with death, hidden in darkness of his dressing room, he seems to be a troubled Hungarian Jewish immigrant rather than The Handcuff King. Dressing room, on the other hand, is something much, much bigger – it’s his temple and his witness, and his deathbed (contrary to popular myth, Houdini didn’t die in a water tank, that was fabricated in the 1950s film. His actual cause of death is much less straightforward). Exquisite lighting highlights short clips of his life, though the storyline, admittedly, can get a bit messy at times – here! Mirror challenge (he always accepts every challenge); here! he dances with his wife-to-be (he admits to have a liking for handcuffs and chains); here! suspended straitjacket escape; here! his mother dies; here! he’s buried alive… His best tricks are his worst nightmares, too.

Set design is as simple as it gets – there’s hardly any set at all, just a chair, a table, a chest and a few props – which makes it perfectly functional. Music is simple, too, if a little tacky in the end. To have it more and better, though, would be beside the point – it is, after all, strictly a one-man show.

Self-mortification is a keyword here. Houdini repeatedly self-mortifies himself, in dozens of ways – and Killerby tries to give an answer to why he does it. His Houdini is not merely a thrill-seeker, neither is he hungry for fame. The answer is much more complicated.

Many an actor self-mortify in a tomb of a role that does not measure up to their talent. Barry Killerby had been Mr. Blobby for twenty-three years. It is high time for him to be recognised for who he really is – the Actor, with a capital A.