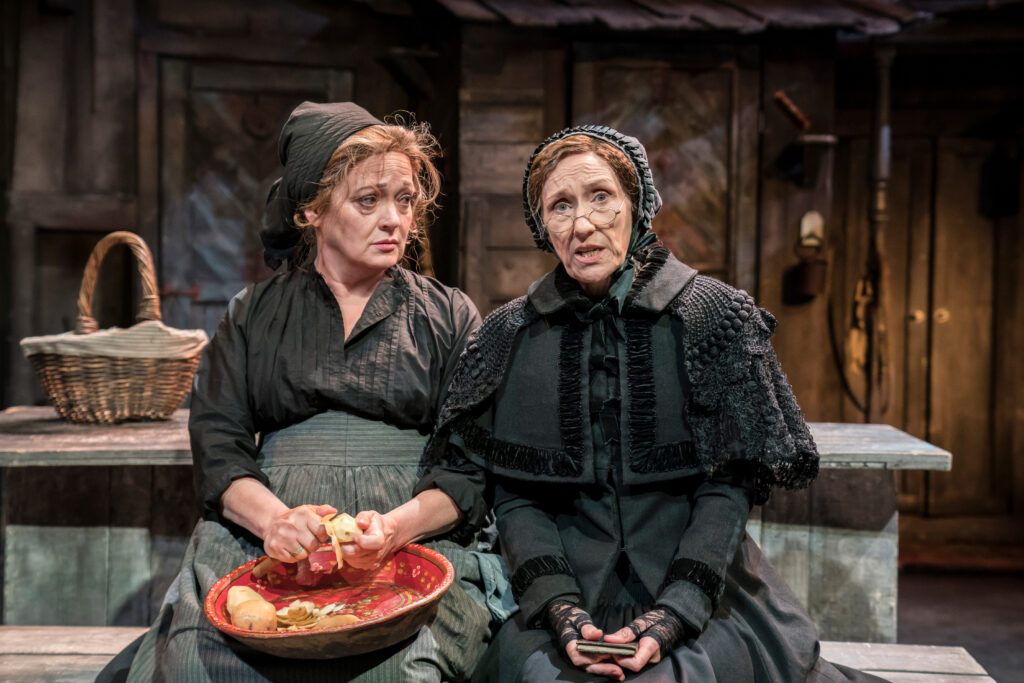 Fiddler on the Roof (Cast Change)

“Friedman’s formidable presence is the perfect complement to Tevye; one that no Matchmaker could cap.”

Almost before Trevor Nunn’s “Fiddler on the Roof” opened last December at the Menier Chocolate Factory, it had ‘West End Transfer’ stamped all over it. Three months on from its relocation to the Playhouse Theatre it is still a richly deserved hot ticket. Settling into the larger space, the show has thankfully lost none of the intimacy and passion: there is always the fear of over-projection, but the subtlety and attention to detail of this production is beautifully intact, gently immersing the audience into the small Russian village of Anatevka in 1905.

Designer Robert Jones’ set – a ramshackle Jewish shtetl – spills out into the auditorium; the smokey darkness of the crooked wooden buildings backed by a foreboding bank of bare woodland, yet overlain with folk-tale lanterns and Tim Lutkin’s time-shifting lighting that conjures both the chilly light of an uncertain dawn with heart-warming twilight. A true reflection of the town folk’s stoicism in the face of their impending resettlement. Trevor Nunn has conjured up the perfect mix of mockery and menace in this atmospheric revival.

Based on the stories of one of the most famous and beloved of all Jewish writers; Sholem Aleichem, the story centres on Tevye, a poor Jewish dairyman, forever questioning ‘Tradition’, and the mysterious ways in which God moves. A patriarchal figure, his refusal to bend to the changing times is slowly eroded by the strong-willed actions of his daughters, who rebel against the custom of arranged marriage and choose to marry for love. Although he never quite lets go, Tevye’s grip on his heritage is increasingly fragile. Andy Nyman gives a stunningly natural and captivating performance of this central role. Whilst making light of his plight with precision-timed quips and asides, we are also continuously aware of his fear of the threat of exile and, more poignantly, his love for his wife and daughters.

In its first major cast change since the transfer Maria Friedman takes over as his wife Golde. Friedman’s formidable presence is the perfect complement to Tevye; one that no Matchmaker could cap. Their onstage chemistry evokes the hard-won intimacy built from the ups and downs of a twenty-five-year marriage; culminating in the tender self-realisation of their duet “Do You Love Me?” Friedman again pours the liquid gold of her voice over the achingly angelic “Sunrise, Sunset”, one of the choral highlights. In fact, the entire company do wonderful justice to Jerry Bock’s sumptuous score, with a sensitive, but never sentimental, interpretation of Sheldon Harnick’s lyrics. Molly Osbourne and Nicola Brown as the daughters Tzeitel and Chava are joined by Ellie Mullane impressively stepping in as Hodel. The three sisters give heartfelt performances, accentuating the satire often missed in “Matchmaker, Matchmaker”. The village matchmaker is indeed central to the story, and her role is made more vital by Anita Dobson who takes on the mantle with a thrilling energy, showing us her dab hand at comic timing.

But beneath this musical portrait of family and community is the solemn undercurrent of violence, anti-Semitism and persecution; sadly still all too pertinent. Matt Cole’s choreography, paying homage to Jerome Robbins’ original, shows how rapidly high spirits can descend into oppressed chaos, particularly when a vodka-soaked wedding dance is broken by the arrival of a vicious tsarist pogrom at the close of the first act. A threat that is taken to its tragic conclusion in the final scenes.

The human touch easily sits alongside the disturbing historical commentary. Yet, despite the epic themes, the staging of this production lends real intimacy to a thousand seat venue, and by avoiding the temptation to overplay to the rafters the emotional impact touches the heart with much more force. Its message is clear; but what is equally clear is that this quite simply is still a triumph of a show. Musical theatre at its best. Matchless. 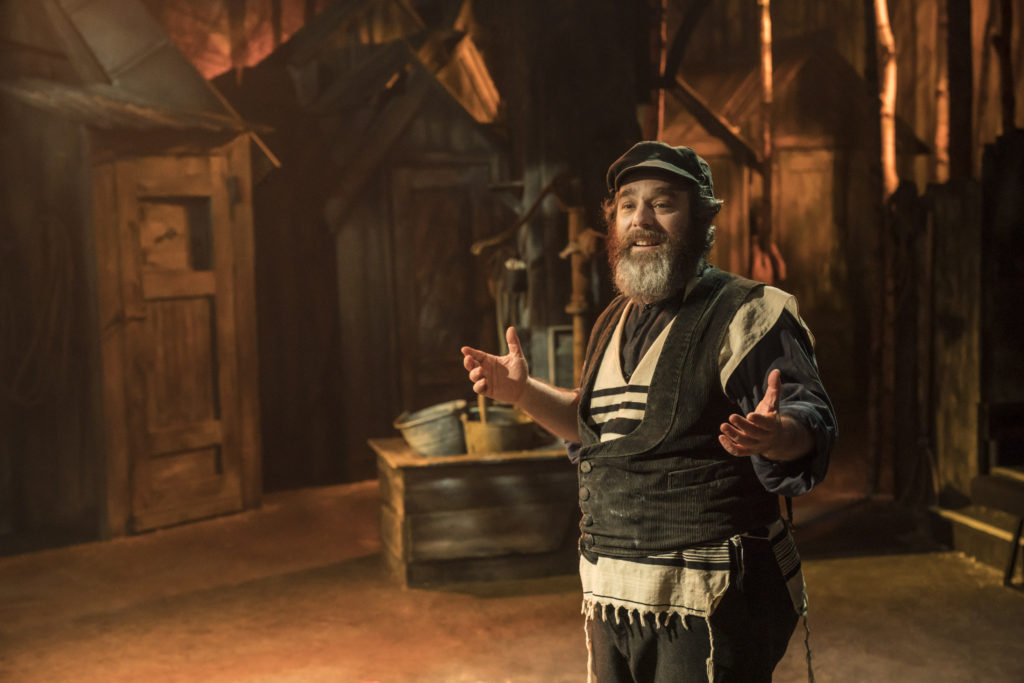 “warm and intimate, yet vast and epic at the same time”

“Fiddler on the Roof” is based on the stories of one of the most famous and beloved of all Jewish writers; Sholem Aleichem, who came to be known as the ‘folk singer’ of the Russian shtetl. Written between 1894 and 1914 the stories were a series of stand-alone monologues told by the character of Tevye to the reader. Aleichem had started to amalgamate these into a dramatic adaptation but died before he could finish it, but what he had already managed to do in his tales was to capture the hunger and the passion of his people trying to survive under desperate circumstances, but also the humour and the irony.

The often-staged musical has reflected this with varying degrees of success, but it is safe to say that Trevor Nunn’s revival hits the notes perfectly with a truly magical mix of mockery and menace. The story centres on Tevye, the father of five daughters, and his attempts to maintain his Jewish religious and cultural traditions as outside influences encroach upon his family’s lives, not least of which is the edict of the Tsar that evicts Jews from Russia. At the same time, he is coping with the strong-willed actions of his three eldest daughters who wish to marry for love and whose choice of husband moves further away from the customs of the faith and heritage that he is, sometimes reluctantly, clinging onto. This production brings to the fore the deeply rich humour of Joseph Stein’s book. But we are never quite allowed to escape the shadow of the impending threat of exile.

Andy Nyman makes this show his own with his portrayal of the patriarch ruled by his wife, Golde (a perfectly pitched performance from Judy Kuhn). Nyman’s effortless stage presence sculpts a wholly heartfelt and honest portrayal of his character, veering between tradition and compassion, and bending his beliefs, where necessary, for love. He knows exactly when to switch on and off the comedy, a skill matched by the entire ensemble. The same sensitivity is applied to Sheldon Harnick’s lyrics. Often unfairly branded as kitsch, the poignancy and the irony are accentuated by the fine performances. And combined with Jerry Bock’s sumptuous score, orchestrated for an eight-piece band, it is an exceptionally moving piece of musical theatre.

Choreographer Matt Cole remains faithful to Jerome Robbins’ original which is a feast for the eye. In fact, all our senses are treated to this outstanding rendition. Full of belly laughs it is a cry from the heart. The gorgeous strains of “Sunrise, Sunset” segue into a euphoric wedding dance which, in turn, is broken by the arrival of a vicious tsarist pogrom.

It is warm and intimate, yet vast and epic at the same time. It speaks softly to each of us yet its message shouts out to all of us. The source material is over a century old, but it is still sadly topical and the final scene where the villages flee their homeland is breathtakingly stirring. The musical ends not with a bang but a whisper. Not with a chorus line but a band of silent souls heading towards an uncertain future. The lone fiddler is beckoned, and he steps down from the roof to follow them.

All that can follow this is the standing ovation this production deserves. A production that is heading towards a far from uncertain future.