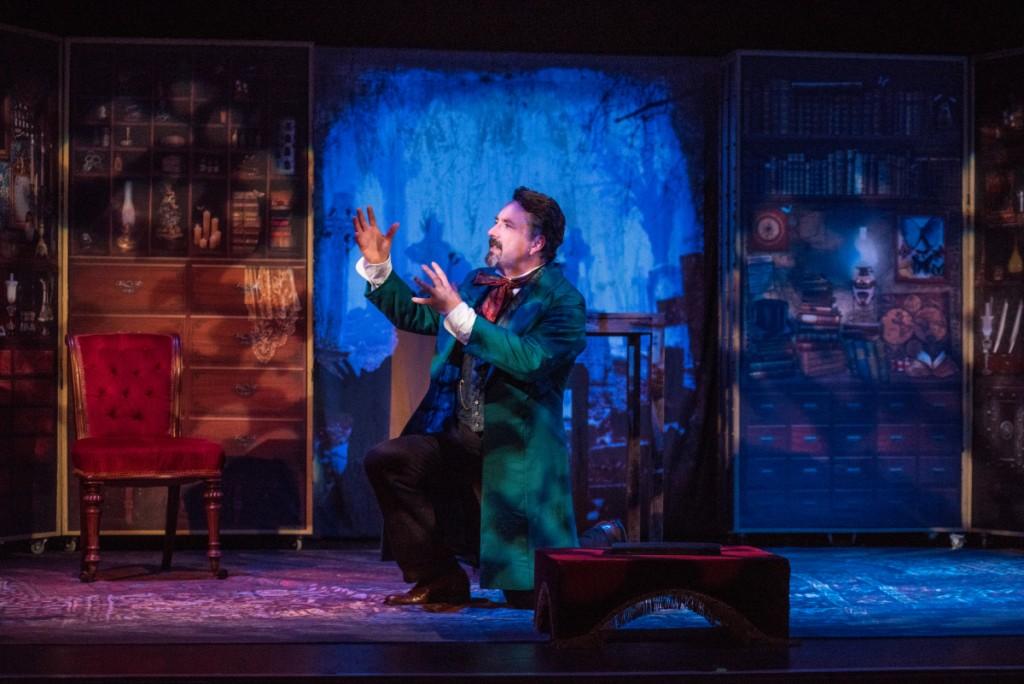 Charles Dickens’ A Christmas Carol seems a particularly timely choice of pre-Christmas fare this year. As one walks through the streets of London lit with extravagant decorations and past shops bursting with gifts, it’s quite a shock to get to the Greenwich Theatre and be drawn back into a Victorian world of cruel avariciousness and indifference to the suffering of one’s neighbours. A Christmas Carol is a fable about the austere world that Dickens knew so well as a child, and then wrote about so vividly as an adult. It’s an appropriate reminder that not everyone has the means to enjoy Christmas, or any seasonal celebration, even today.

The European Arts Company’s production of A Christmas Carol is a one man show, recreating Dickens’ own reading tours of his best selling novella. Sitting in the theatre, listening to John O’Connor recite the entire piece from memory, it is easy to understand why this piece has held the attention ever since 1843, when it was first published. Dickens’ words are so memorable, they hardly need a set, lights, music, or even movement from O’Connor. It is enough to let the actor’s voice paint the scenes that introduce us to Scrooge, his ghostly visitors, his nephew Fred, and of course, the unfortunate Bob Cratchit and his disabled son, Tiny Tim.

Director Peter Craze does not take the power of Dickens’ words for granted, however. This version takes care with every detail of the staging. The setting, John O’Connor’s costume, (both designed by Tom Paris) and any prop that might add to the authenticity of the actor’s portrayal of the great writer himself is finely done, and present on stage. There are witty touches, like two enormous traveling trunks which open to reveal bookcases, lamps, and other details of a Victorian writer’s study. The lights are designed (by Duncan Hands) to illuminate these at the appropriate moment, and a screen between the trunks allows for the projection of period street scenes. The music and sound effects (Matthew Eaton) are equally chosen with care. All that is left for O’Connor to do is to narrate the story, and give the audience a sense of the characters. It is here that the authenticity of the recreation falls down a bit—not because of O’Connor’s acting skills—but because it is well nigh impossible for a modern actor to recreate Victorian fashions of public speaking without seeming ridiculous. O’Connor wisely confines himself to creating a warm, authorial voice with frequent steps out of Dickens’ character, and into the characters of A Christmas Carol.

This Victorian morality tale is a good choice for theatre goers looking for more thoughtful seasonal fare. It will give much to discuss on the way home from the theatre, passing the homeless trying to keep warm. A Christmas Carol is always a well timed wake up call to help the less fortunate in our communities. Because, really, who wants to spend Christmas alone in the company of the ghosts of Christmas Past, Present and Yet To Come? 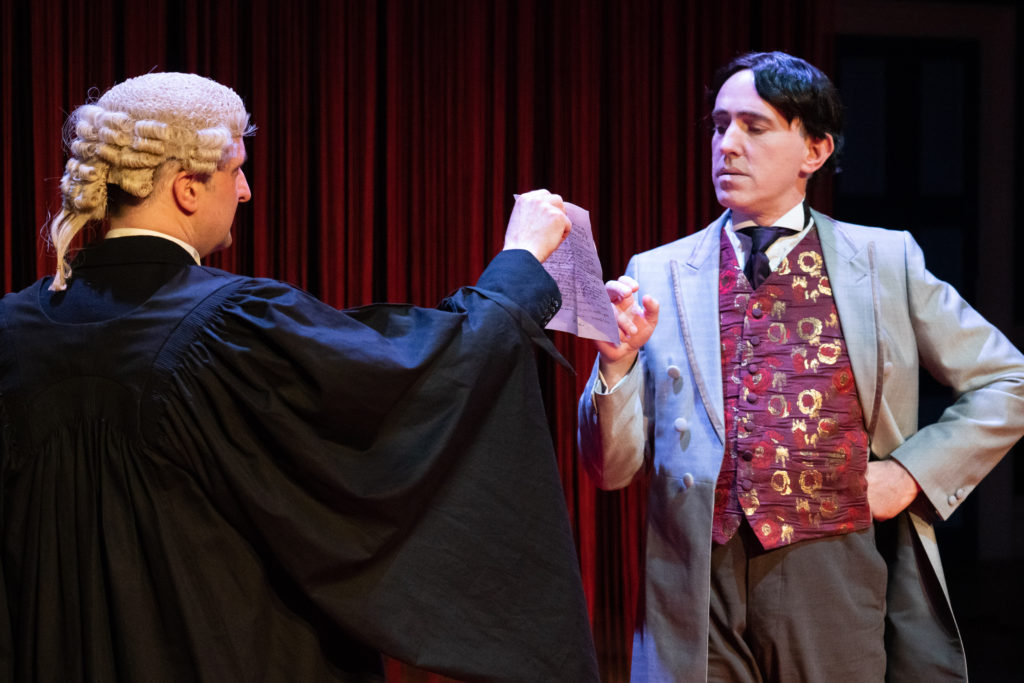 European Arts Company’s production of The Trials of Oscar Wilde opened at Windsor Theatre Royal last night before beginning a nationwide tour that takes in some twenty three venues from Taunton to Wolverhampton and runs until June 1st. This is top-notch court-room drama, with a refreshingly simple set design (Tom Paris) which provides an ideal backdrop for a talented ensemble cast of just four.

The company have revived a much-praised production that toured in 2014 after a sell-out run at the Trafalgar Studios. The story of Wilde’s tragic fall after being prosecuted for “gross indecency with other male persons” is familiar enough, after innumerable biographies and films, including a celebrated version starring Stephen Fry which appeared in 1997. Wilde conducted a tempestuous four year affair with Lord Alfred Douglas (‘Bosie’), the son of the Marquess of Queensberry, who as a result accused the celebrated playwright of ‘posing as a somdomite’ (sic).

Wilde attempted to defend himself against this accusation in court, but withdrew his prosecution when details of his affairs with rent boys emerged in court. A public prosecution followed soon after. What distinguishes The Trials from other accounts is that it was co-written by Wilde’s grandson Merlin Holland, using 85,000 words of direct shorthand transcript from the trial, which only came to light in 2000.

What light do Wilde’s very own words shed on this most celebrated of celebrity trials, and how well does this new production tell the tale? In Act One, the libel trial, Wilde unsurprisingly emerges as a boastful, and conceited figure, his evidence peppered with just the kind of bon mots you might expect. But some of his responses are terse too, and by the public prosecution in the second act, repeated slips make his panic plain. John Gorick reprises his role from four years ago. In spite of the posturing and flash waistcoats (splendid costumes by Anett Black), his Wilde is a slightly distant, at times almost glacial figure, trapped in the dazzling lights of a mess of his own making.

Wilde’s own words condemn him and the establishment gleefully brings him down. Much as Wilde admits he loved Douglas, who coined the phrase ‘the love that dare not speak its name’, he proclaims that he is the only person he ever adored. Three other cast members, (Rupert Mason, Benjamin Darlington and Patrick Knox) take turns to play prosecution and defence, rent boy and chamber maid. Rupert Mason is particularly effective as Wilde’s smug accuser in the criminal trial. Benjamin Darlington particularly garners sympathy as Charles Parker, the rent boy who was plainly besotted by his time with Wilde.

Co-written and directed by John O’Connor, this is a polished and worthwhile show that sheds new light on a familiar tale.

Other shows covered by this reviewer: