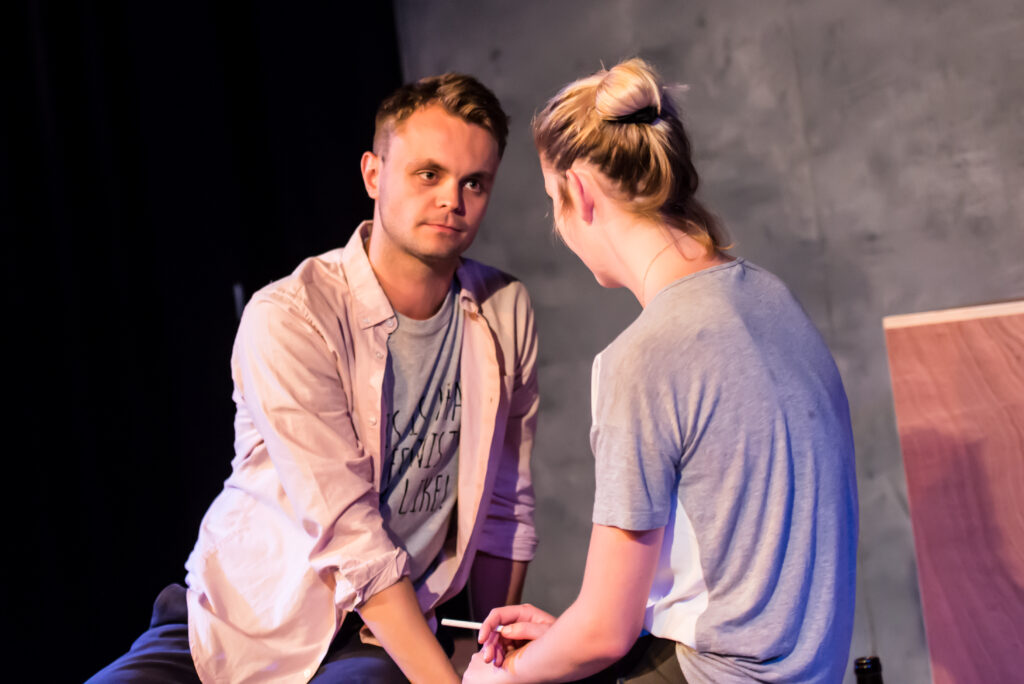 Penelope Skinner’s Eigengrau, originally produced in London in 2010, follows the intersecting lives of four young people struggling to get by in London. Cassie works for a feminist organisation that lobbies parliament. Rose believes in fairies and star signs and true love. Mark is a womanising marketing bro. Tim, suffering from depression, barely manages his shifts at a fast food takeaway. Their lives intertwine with devastating consequences in this modern-day Grimm’s fairytale.

Director Georgie Staight’s no-frills revival is powerful and chilling. With a sparse, efficient set (Bex Kemp) – just a few wooden boxes used as benches and tables – Staight boldly strips the show down to its leanest form. Fast-paced and highly entertaining, there isn’t a dull moment in its nearly two-hour runtime.

Staight’s faith in the strength of her cast to carry the show barefaced, without the padding of excessive design, is not misplaced. Four well-selected actors deliver accomplished performances. George Fletcher is easily convincing as the cocky, manipulative Mark. Callum Sharp is subtle yet nuanced as the harmless – but perhaps not quite – Tim Muffin. Isabel Della-Porta wholly owns her role as the strong but still immature feminist Cassie. And Katie Buchholz shines, earning her place as the star of the show, with an exceptional performance as the idealistic, desperate Rose. Buchholz is captivating: fluttery and electric with madness at all of her edges. She effortlessly draws focus and holds it for the duration she’s on stage. Like a violin string wound too tight, she keeps us on edge, uneasily wondering when she’ll snap. Cassie says she’s a little bit afraid of Rose. We are too.

Although there are moments of the play that feel dated – in the post-Metoo era, a ‘feminist’ is no longer a curiosity – Staight is smart in realising the many ways Eigengrau is immediately relevant. Men pretending to be woke (or worse, believing they are), while demeaning and manipulating women, are still sharks in 2019 waters. And the overall feminist message still rings true: Rose embodies the damage done by years of consuming misogynist ideology packaged as fairytales and rom-coms. Disinterest from men means she’s deficient. There’s no relationship that can’t be fixed by the right dress and a grand gesture. It’s no wonder her optimism, at the age of twenty-seven, is beginning to take on a manic quality. Cassie wants Rose to see the world for what it is: cruel and oppressive, full of untrustworthy people. But Rose shuts her eyes to any evidence that contradicts her belief the world is a good place. If the world is hideous, isn’t it better to be blind?

Eigengrau is the name for the shade of black seen by the eye in perfect darkness. With this revival, Staight is shrewd asking the woke generation of 2019 – who see, daily, the harsh realities of a sinister society no longer bothering to disguise its hate – how tempting, how soothing, must eigengrau be? To shut your eyes, shut it all out, even for a moment? But while eigengrau may seem like a safe haven, Skinner’s story reminds us of the danger in seeking it. No progress can be made in darkness. There’s no going back to sleep, now that we’re awake.

Have I Told You I’m Writing a Play About my Vagina?

“Vag is boisterous, loud and makes her opinion on penetration clear: She doesn’t like it!”

Have I Told You I’m Writing A Play About My Vagina?, written by Ella Langley and directed by Georgia Figgis, explores the difficult and often uncomfortable relationship between those who are female-identifying and their bodies.

Bea (Christelle Elwin) is a fun-loving university student coming to terms with living with vaginismus, an involuntary muscle contraction of the vagina that makes penetration painful or even impossible. This means that Bea not only struggles with penetrative sex but even putting in a tampon. Throughout the play, Bea chats with Vag (Lottie Amor), a personification of her vagina, as they work together to negotiate a life in which they can both be happy.

Vag is boisterous, loud and makes her opinion on penetration clear: She doesn’t like it! Vag’s pink, puffy skirt nods to pubic hair but it was notable that nothing else about her costume was anatomically inspired. Amor navigates between several roles from Vag to doctor to a motley crew of male suitors all wearing a beanie with ‘MAN’ printed on the front.

The script was highly amusing and there were many laugh out loud moments such as Bea’s awkward sexual encounter with a particularly eager Australian man. The play treats a sensitive and little talked about issue with playfulness and Langley’s decision to write about her personal experience with vaginismus makes the topic altogether more approachable. Amor is gifted most of the humorous lines, but Bea’s oddness and insecurity makes her a highly relatable character.

The chemistry between Bea and Vag grows as the play goes on. Dancing was used well to mirror the pair’s growing relationship. Vag first enters the stage running and moving around the stage with no direction or rhythm flipping off a pained Bea. Slowly, over time, the pair become warmer with each other and begin to touch. By the performance’s end, they slow dance while Elwin sings gently.

The set (Léo Monteiro) was simple: a bed on wheels, a pair of chairs and a toilet on a wheeled platform used only for the play’s opening scene. There was little interaction with these objects outside of their functional purpose which though rather uninspired did allow for focus to remain on the action on stage. A set of turntables and a microphone behind a wooden podium at the centre-back of the stage contributed to some fabulous scenes such as Bea dancing in a club while Vag narrates her efforts to ‘get with’ someone but its use was concentrated in the first half of the play and then seemingly forgotten thereafter. The lighting (Johnny King) flicked between reds and harsh white depending on the tone of the scene.

Langley’s play shines a light on a condition that effects roughly one in five hundred women but is little known. It was wonderful to see Bea grow in confidence throughout the play and proudly talk about her condition with both men and women alike. A particularly good scene saw Bea at a party talk openly about her condition and the women around her instantly open up about their own sexual health issues. This scenario is all too common with Bea explaining that she said nothing previously because she ‘just assumed’ that everyone was ‘having great sex’ and ‘didn’t want to seem unsexy’.

Have I Told You I’m Writing A Play About My Vagina? makes an important statement about having trust in yourself and your body and emphasises the importance of open discussion about female sexuality.

Have I Told You I’m Writing a Play About my Vagina?