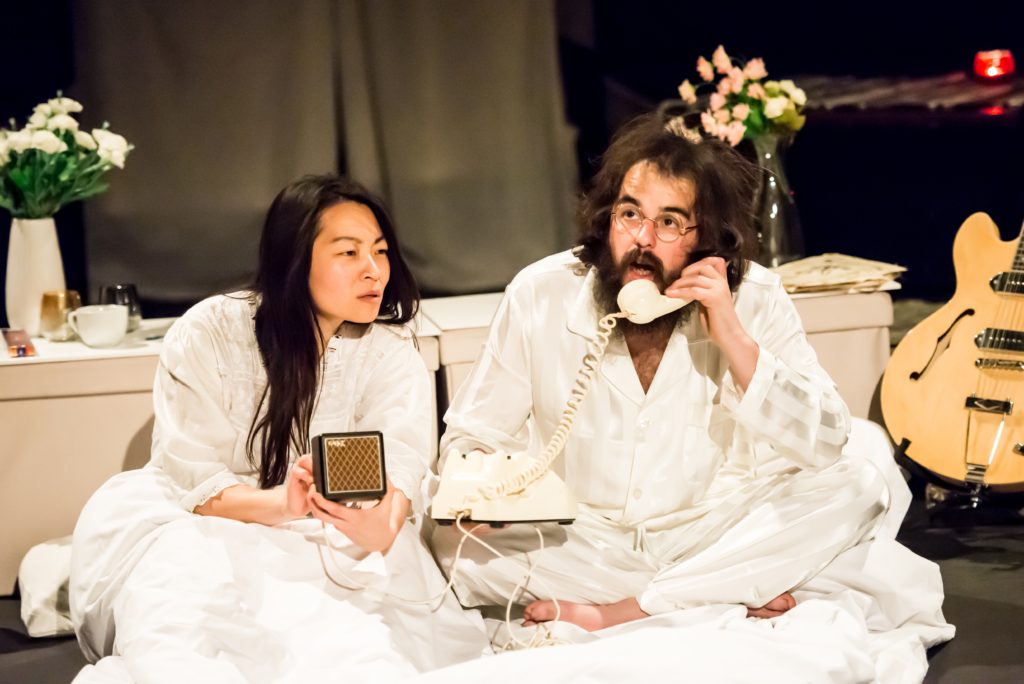 “the cast and crew clearly work hard both to entertain and deliver a message, unfortunately the story founders in a couple of areas”

Everyone has heard of The Beatles and most everyone has heard of John Lennon, but whilst John and Yoko may be known generally for their peace campaigns, and for a couple of very strange music collaborations, the details of their story are certainly lesser known. Presumably, ‘Bed Peace: The Battle of Yohn & Joko’ seeks to put that to rights.

The narrative centres around the two weeks that John and Yoko famously held a ‘bed-in’ in a hotel suite as an experimental peace protest. This is used as a pivotal moment in developing and actioning their ideas of effective protest. A lot of agendas are thrown in to the conversation – Women’s Lib, the Vietnam War, and the Black Rights movement for example, the last put forth by Amelia (Amelia Parillon), a Black Rights activist invited to talk with John and Yoko. Parillon is easily the star of the show, particularly shining in an impassioned monologue discussing the innate privilege in being able to be kind all the time.

Craig Edgley (John) isn’t afraid to explore the more aggressive side of Lennon’s character in his struggle to overcome his ego. He succeeds in balancing likability and a short temper, and his chemistry with Jung Sun den Hollander (Yoko) nicely portrays the trial-and-error nature of their political campaigns, as well as the struggles they might have had between one another.

Rocky Rodriguez Jr has devised a very physical and energetic piece of theatre, constructing interesting ways to move around the stage – backward roles, synchronised footwork and a couple of little acrobatic moves. Abigail Screen’s design creates an intimate bedroom space, of course with all the sixties trappings – a panel of flowers hanging from the ceiling, tealights scattered everywhere, various protests signs tacked to the walls – “People For Peace’, “Make Love Not War”, “Give Peace a Chance”. And as we would expect, the soundtrack is taken care of, with big Beatles and Lennon hits throughout.

Whilst the cast and crew clearly work hard both to entertain and deliver a message, unfortunately the story founders in a couple of areas: firstly, it’s really just about John. Yoko features as an influence on his thinking, but not as an independent character. She doesn’t quite fall in to the ‘manic pixie dream girl’ category, but she’s not far off. The same can be said for the mention of the Black Rights and Women’s Lib movements – rather than being platformed, they’re just used as vehicles for John’s progression.

The second issue is that whilst there are moments of seeming honesty and grit, they are far outweighed by moments of artifice and sterile, extra-smiley portrayals of the sixties.

The show succeeds in light entertainment, and who doesn’t enjoy a bit of a Beatles sing-along, but it misses the mark a fair way in authenticity and purpose.