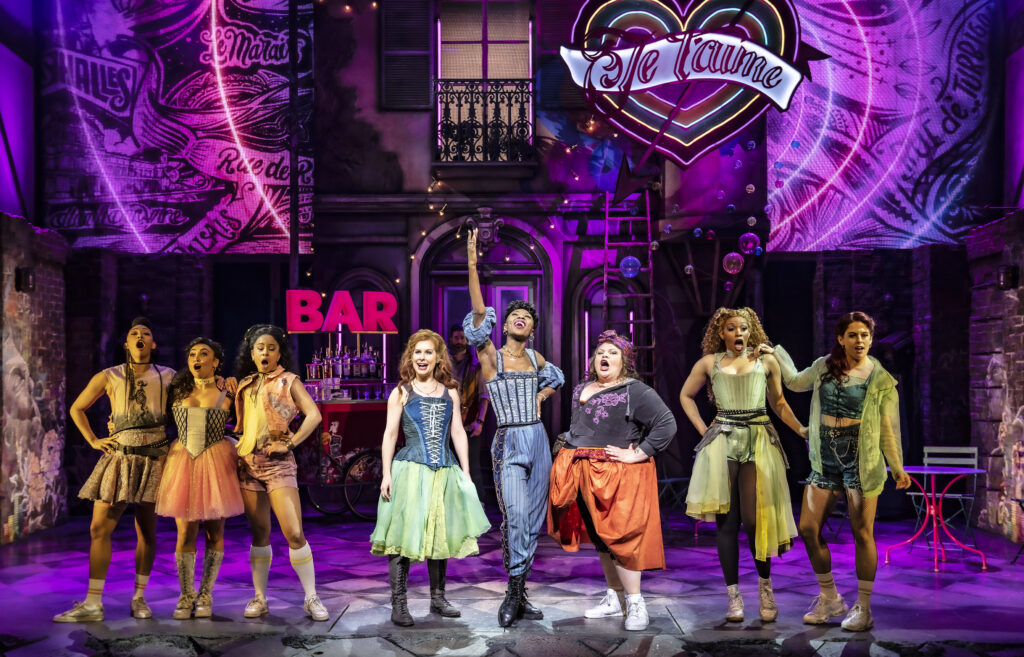 What if Romeo and Juliet didn’t end so tragically? The hit West End musical & Juliet (directed by Luke Sheppard) sets about answering exactly that by giving Juliet (Miriam-Teak Lee) a second chance at life. When Shakespeare (Oliver Tompsett) is convinced by his wife Anne Hathaway (Cassidy Janson) to write the play’s famous conclusion, Juliet and her best friends Anne, May (Alex Thomas-Smith) and Nurse (the incredible Keala Settle of Hands on a Hardbody fame) embark on a wild trip to Paris to live out their lives without restriction. A love triangle with the sweet Francois (Tim Mahendran) soon unfolds and things get all the more complicated when Romeo (Tom Francis) comes back to life…

The fantastical reimagining hinges around a selection of world-famous pop hits by the Swedish producer and writer Max Martin. Song after song is hurled at the audience, some more fitting than others to the scenario at hand. The Backstreet Boys’ ‘I Want It That Way’ is reprised several times to really highlight the message of the musical – the importance of making your own choice. Demi Lovato’s ‘Confident’ is a particularly enjoyable number which Juliet and Francois belt out with gusto and ‘Oops!…I Did It Again’ is comically employed when Juliet finds herself engaged after only one day of romance…again.

Max Martin’s songs are great crowd pleasers and a lot of fun but the jukebox musical always suffers by its song limitations and the songs already feel dated only three years after the musical’s release. There is also no one song that packs a real punch. The incredibly strong voice of Lee is unfortunately underused and apart from the finale song ‘Roar’ (by Katy Perry), our lead does not have a big number that she can really sink her teeth into. The band – led by Patrick Hurley – do a phenomenal job of keeping up with the incredible pace of the production with 29 total songs and countless other reprisals.

Lee is phenomenal – we will no doubt be seeing much more of her. Janson and Tompsett have great chemistry and expertly guide the story on its ways. Settle is, as expected, an absolute powerhouse, leading on laughs but also offering particularly touching moments with both Juliet and her lover Lance, Francois’ father (Julius D’Silva). The choreography (Jennifer Weber) is very strong and brings a real energy to the production.

The cast should also be praised for its diversity – in both gender expression and ethnicity. It is refreshing to see so many different types of people on stage and Janson’s proclamation that someone’s gender and sexuality is none of our business garners cheers from the West End audience.

The set and staging (Soutra Gilmour) is second to none. Objects and set pieces fly in and out; characters are lifted into the sky on chandeliers and balconies; pyrotechnics, glitter and confetti rains galore. The incredible production value makes certain scenes – mostly notably the finale – feel more like a concert than our typical theatre show. Accompanied by adventurous video and projection design by Andrezej Goulding, the audience is fully immersed in Juliet’s Parisian adventure. The lighting (Howard Hudson) too contributes to the great spectacle with strobes and spotlights a regular feature and Paloma Young’s neo-Elizabethan costumes do wonders to bring the whole show together.

Some issue can be taken with the show’s appearance of being a feminist corrective to Shakespeare when in fact Juliet once again finds herself centering her life around a man albeit a much nicer one than playboy Romeo. Moreover, amongst all the excitement, Juliet is left without almost any personality. Her characterization is akin to a princess in a pantomime, lacking any real goals or aims. It is a shame she does not have more vigour and that the writers did not think to give her some sort of career-orientated plot, for example.

& Juliet is undeniably good fun and any viewer will be blown away by the sheer grandeur of the production. It is just unfortunate that the general message of the importance agency is a good one is sometimes underpinned by the characters and plot itself. 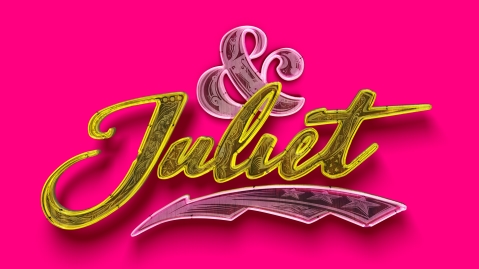 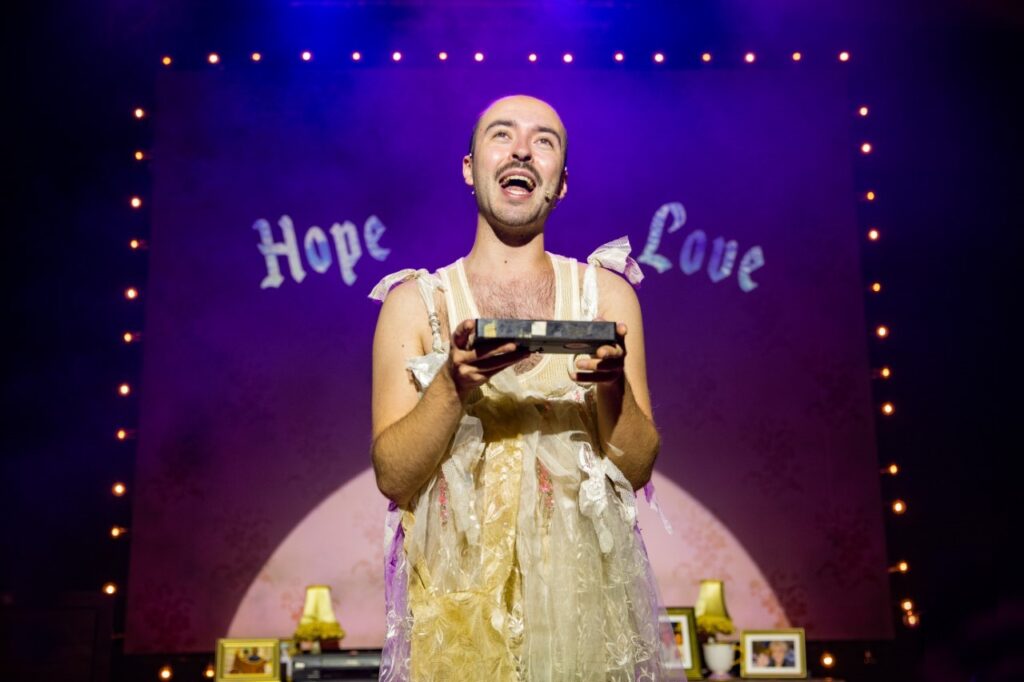 “Twelve-year old Rob is living the dream, and they’re inviting you, pick ‘n’ mix in hand, to watch”

All future productions, please take note: I absolutely accept bribes, in this instance a tub of pick ‘n’ mix waiting on my seat, particularly if it’s the fancy kind with chocolate-covered honeycomb and giant squishy jelly babies, which this was.

Using childhood home videos of Rob Madge directing their mum, dad, gran and grandad (and on one occasion aunts, uncles and cousins) in fully scripted, blocked and costumed productions, we’re guided through the seven steps to putting on a seamless Disney parade through gran’s hallway.

In doing so, Rob talks us through their journey of self-discovery and, despite the very best support from their family, battling society’s seemingly insatiable need to try and crush the sparkle out at a very young age.

On the one hand, this is a totally relatable story for anyone who doesn’t fit the mould, who was told they’d be better off trying to blend in than just be themselves. On the other, this is the most self-indulgent endeavour, in much the same way of a child’s living room show which, one supposes, is sort of the point. Regardless, it does feel a bit like it was created with mainly friends and family in mind who, no doubt, will have had the best time ever watching their beloved retrace their steps to their fabulous present selves.

And Rob is absolutely fabulous, as both a bossy 12-year-old sliding down the banister in full Mary Poppins get-up, and standing before us this evening, rocking a petticoat with confetti-filled pockets, and splicing family videos with belting, Broadway-like numbers.

Ryan Dawson Laight’s living room stage design is appropriately phantasmagoric: a set of draws turns into a showtime set of stairs, beneath an armchair hides a glittering golden runway, and tucked inside a TV cabinet is a set of disco lights and metallic streamers.

Costume changes, whilst far from seamless, are brilliant in their homespun charm: Maleficent’s fierce cape billows away to reveal Belle’s sunflower yellow dress, which tears off to unveil Ariel’s shell bra and shining tale.

And this is really the main difference between Rob’s homemade Disney parade over a decade ago and tonight’s performance: the full force of a professional production, replete with director (Luke Sheppard), lighting designer (Jai Morjaria), composer (Pippa Cleary) and projection designer (George Reeve). This is what happens when you give a brilliant, flamboyant twelve-year-old creative control and a budget. Twelve-year old Rob is living the dream, and they’re inviting you, pick ‘n’ mix in hand, to watch.

The Turbine Theatre until 3rd July

Other shows reviewed by Miriam this year: