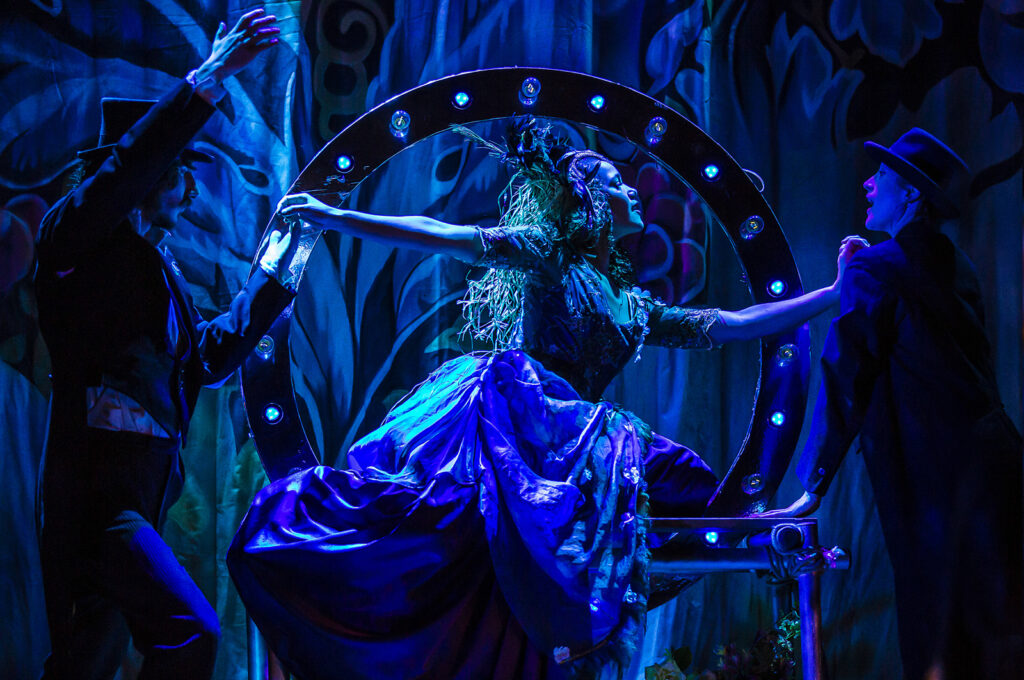 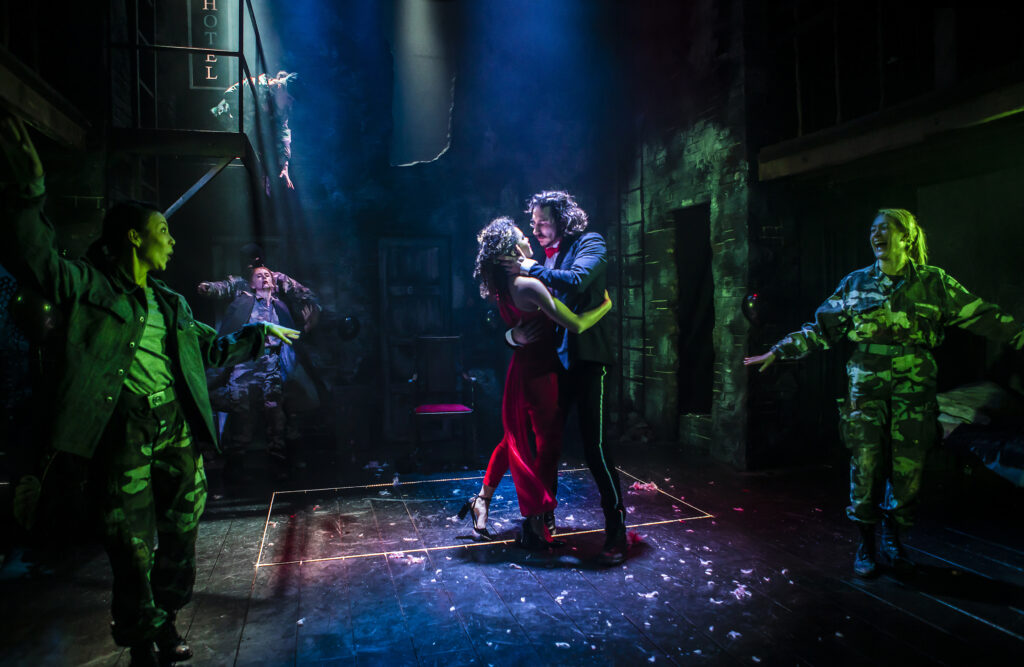 “a gritty, unfurling tragedy filled with constant movement and action”

Scotland’s war-torn landscapes were Shakespeare’s original setting for Macbeth, providing an air of bleakness fitting to a story about a thane who kills his king. Stepping forward in time, this production finds a new current of bleakness to build upon, with dull building facades and army fatigues – all tacked over with a sheen of glitz and glamour, such as the sleek tux and red dress Macbeth and Lady Macbeth wear to crow over their newly-won court. Overall, the Watermill Theatre’s production is a worthy version of the tale, thick and heavy with atmosphere.

The play opens with war, as Billy Postlethwaite’s moody Macbeth greets not the usual ethereal witches, but looming soldiers fresh from the battlefield, who violently prophecise that he shall be king. But the dull underbelly of war is always there throughout the play, even in later scenes of revelry. When triumphant Macbeth and Banquo (Robyn Sinclair) return from war to Lady Macbeth (Emma McDonald), it follows them in the form of ominous throbbing guitar chords and solemn drumbeats. Growing darker throughout the play, especially after the couple murder their king Duncan (a warm-hearted portrayal by Jamie Satterthwaite), these musical touches serve to accentuate the mental anguish of our protagonist and other troubled characters.

The whole play is moody – an aesthetic that draws you in and can be credited in large part to the music and scenery. The musical elements (directed by Maimuna Memon and performed by the company) are an impressive feat; they start off hesitantly but by the end become so omnipresent that you begin to wonder how the play would have functioned without them. Featuring classics such as The Rolling Stones’ ‘Paint It Black’, the song choices are fitting throughout, involving minimal singing and working best as background ambience.

Clever scenery and set design (Katie Lias) casts an intentional shadow over the proceedings. Perhaps the neon lights over Macbeth’s reimagined hotel residence fading to read just ‘hel’ is a little on the nose, but the greying pockmarked building that dominates the stage acts as a nice metaphor for Macbeth’s initial feelings of impenetrability. Lighting (Tom White) is also deployed well against the monochrome backdrop to show blood, battle, and the bright trees of Birnam wood.

While the actors in some cases take a little while to warm up to their roles, the play does offer some new interpretations of familiar characters. Postlethwaite’s Macbeth is reminiscent of a troubled warrior from fantasy media, and while Mcdonald’s Lady Macbeth comes across a little overbearingly posh at the start, she grows to become more developed. Lucy Keirl also does well with the relatively minor role of the reoccurring hotel porter. All round, the performances from the rest of the company (Molly Chesworth, Peter Mooney, Lauryn Redding, Tom Sowinski, and Mike Slader) are generally good and grow with the thickening atmosphere.