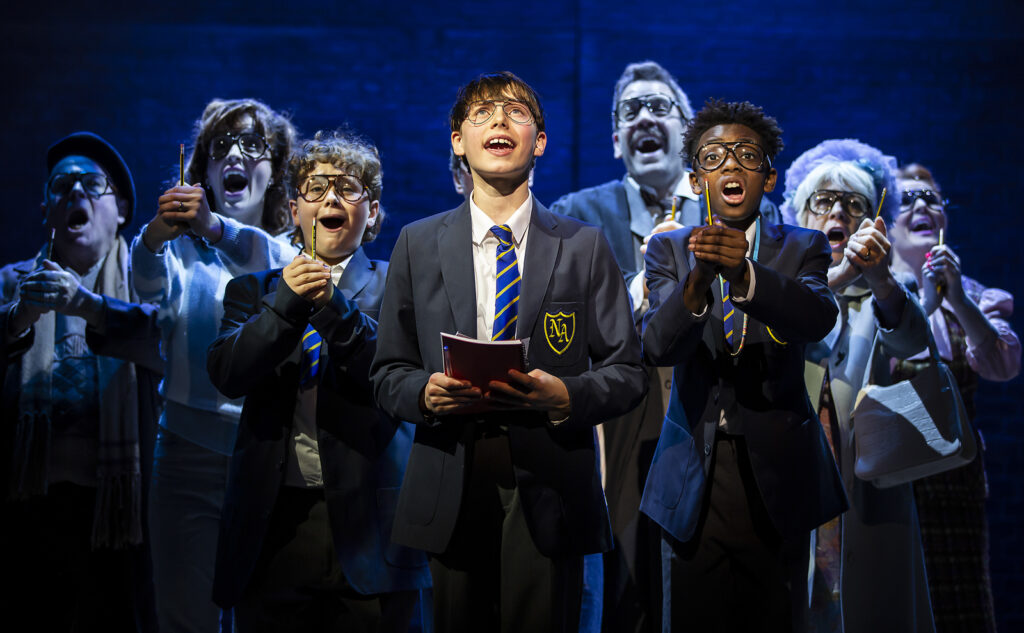 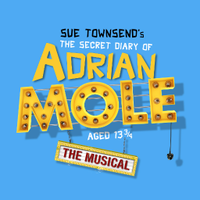 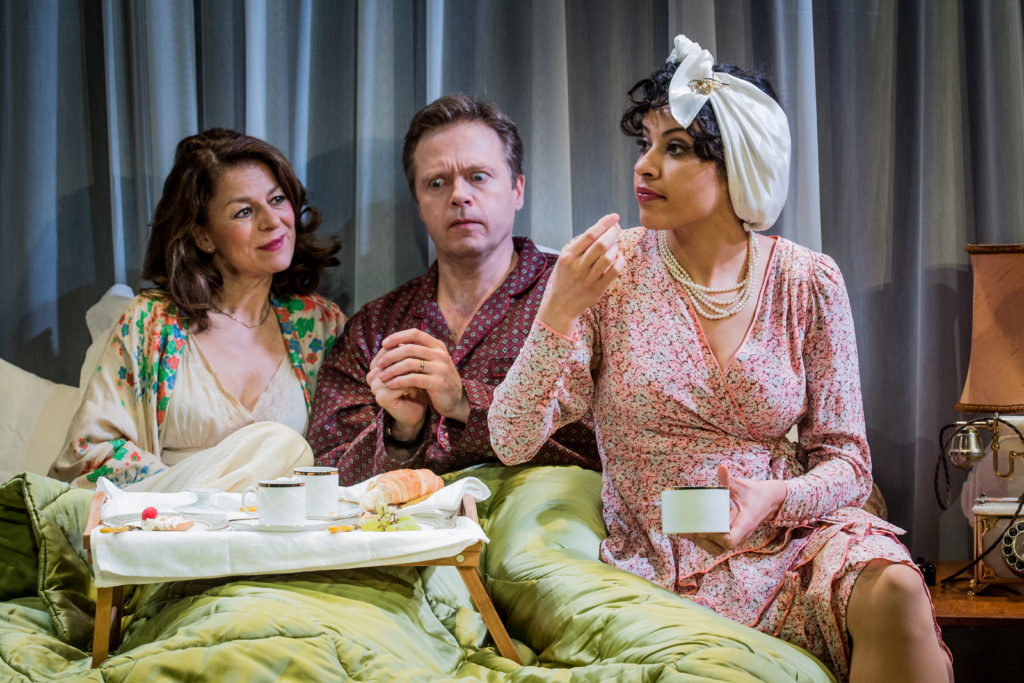 Bedroom Farces is the first instalment of Noël Coward’s ‘Tonight at 8:30’, a series of nine plays performed over the course of the day at the Jermyn Street Theatre. Using a cast of only nine performers, the series of plays is a tough task to undertake, especially when working with a script written by such a well renowned playwright. Director Tom Littler does a great job of keeping the audience engaged throughout the first two hour fifteen minute instalment, leaving them waiting excitedly for the next two.

We Were Dancing is the first performance, and it achieves roars of laughter from the audience. The cast work incredibly well together, their comic timing impeccable. Set on the veranda of a country club in the 1930s, it documents a married woman and divorced man falling in, and quickly out, of love. Included is a song, which seems to lack the polish and professionalism of the rest of the play. The singing and dancing somewhat falls short of the incredible acting of the rest of the performance, however this does not remove from a hilarious and entertaining play.

Ways and Means (main picture) follows and is by far the best performance of the trio. Miranda Foster and Toby Cartwright play a penniless couple who are desperate to get their hands on money in any way they can. Forster and Cartwright work beautifully together, expertly presenting the couple and their wavering marriage. Set in one bedroom, with only a dresser and bed for set, Ways and Means is thoroughly entertaining, and you find yourself completely rooting for the couple as they attempt to figure out a solution to their problem.

Slightly more whimsical is Shadow Play. Incorporating elements of physical theatre, song and dance, it follows the dreams of Victoria Gayforth (Sara Crowe) after she learns her husband wants a divorce and takes one too many sleeping pills. They revisit the night they met, and the play is doused in a feeling of nostalgia and a need to know what went wrong. The dancing and singing were once again not quite up to the standard of the rest of the play, and the turbulent dream can be somewhat hard to follow, but the play provides a neat ending to Bedroom Farces. 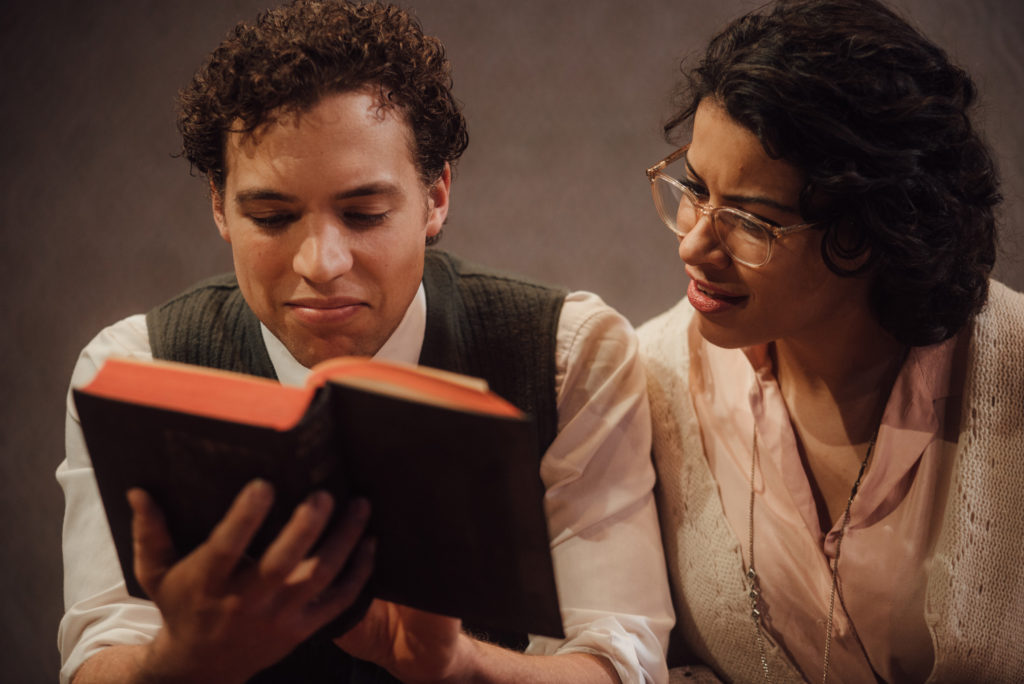 Nuclear Families was the second instalment of Coward’s Tonight at 8:30, and included the majority of the cast in every play, showcasing each of their acting abilities in a multitude of different characters. The set in this series of performances was also incredibly detailed and worked perfectly. Family Album was the first play in this segment, a very short, simple, one room performance that shows a large family in mourning after their father had died. This play was heavily song based, but Rosemary Ashe and Jeremy Rose performed beautifully together, and the ensemble moments were also resonant and harmonious, a vast improvement on this element in Bedroom Farces.

Hands Across the Sea is a slightly more confusing and elongated play which did cause a slight lapse in the middle of Nuclear Families. Set in the drawing room of a wealthy couple’s flat as they have multiple visitors and get very confused over who is who, the plot doesn’t quite feel like it’s going anywhere. There are some hilarious moments, and once again the actors’ comic timing is perfect. Especially notable are Miranda Forster and Stefan Bednardczyk, who play the couple that own the flat, and Rosemary Ashe, who plays their loud and amusing friend.

The play that most stands out in this section, however, is An Astonished Heart (picture above). Much more serious and melancholy than the other plays, it steals the show as the most captivating and thought-provoking performance. The play documents the life of a psychiatrist, played by Nick Waring, after he has an affair and falls desperately in love with his mistress. Waring is incredible, and perfectly suited to this part. After showcasing his comedic skills in the previous plays, he really comes into his own in this performance. You really believe his slow decline at the hands of his wife and lover, sympathising with him even though he is in the wrong. Miranda Forster once again puts in an incredible performance as the wife, perfectly characterising her complicated character. An Astonished Heart was the perfect end to Nuclear Families, and strongly resonated with the audience even hours after leaving the theatre. 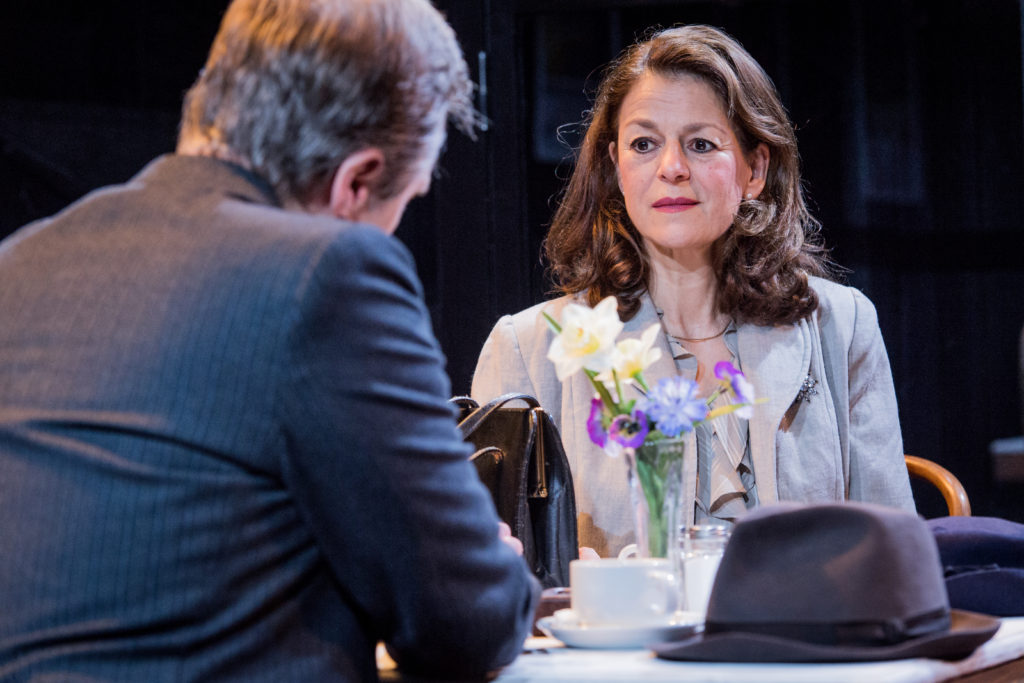 The final portion of the day was Secret Hearts which includes what is perhaps Coward’s most well-known play, Still Life (picture above). The first play in this instalment, Star Chamber, is one which has not been performed since 1936, and it was somewhat apparent as to why. The play lacked the energy and excitement of the rest of the collection, following a group of theatre committee members as they attempt to have a meeting. Like Hands Across the Sea, this play felt like a lapse in comparison to the others in this instalment, missing the comedy and enticement of the rest. It did give the cast the opportunity to once again embrace new characters, and each was well-developed and unique, somewhat carrying the otherwise tedious play.

Red Peppers followed Star Chamber, finally regaining the momentum and hilarity of the rest of the day. This short play follows a comedy duo, the Red Peppers, after they mess up their act and have to deal with the consequences backstage. Duo Rosemary Ashe and Jeremy Rose once again stole the show, their characters perfectly developed, their comic timing pristine and their voices perfectly complimenting each other. Their dance routines were of slightly lower quality, but considering the fact that they had been performing for almost six hours at this point over the course of the day, and the sheer amount of material that each cast member had to learn, this is very much forgivable. This was possibly the funniest of the nine plays and was well suited as the penultimate play before Still Life.

The much anticipated Still Life was the final performance of the day. After Laura, played by Miranda Forster, happens to meet Alec, played by Nick Waring, at a train station refreshment room, their chance encounter starts a tumultuous affair which can only ever end in heartbreak. Every cast member really came into their own in this final performance, fuelled by Coward’s faultless script. Whilst a few things did go wrong, including multiple cakes and a jug of milk ending up on the floor, this didn’t remove from the tension built by the main storyline. This play strikes the perfect balance between comedy and tragedy, ending the entire day on a bitter-sweet note.

Tonight at 8:30 was a long but rewarding day spent at the Jermyn Street Theatre. Whilst some of the plays did lapse over the course of the day, the entire production company have done an absolutely incredible job of performing over seven hours of wonderful theatre over the course of the day. Each instalment has its merits, and it is impossible to judge which one to hold in the highest regard. Every cast member showcases an incredible talent, playing nine completely different characters over the course of the day. Tom Littler did a fantastic job directing nine very different plays and managing to keep the audience fully entertained throughout. Special mention also has to go to Stefan Bednardczyk, who not only performed as an actor but also as pianist throughout the day. Tonight at 8:30 was definitely an ambitious, but amazingly accomplished series of plays which is definitely worth spending an entire day to experience.

Jermyn Street Theatre until 20th May