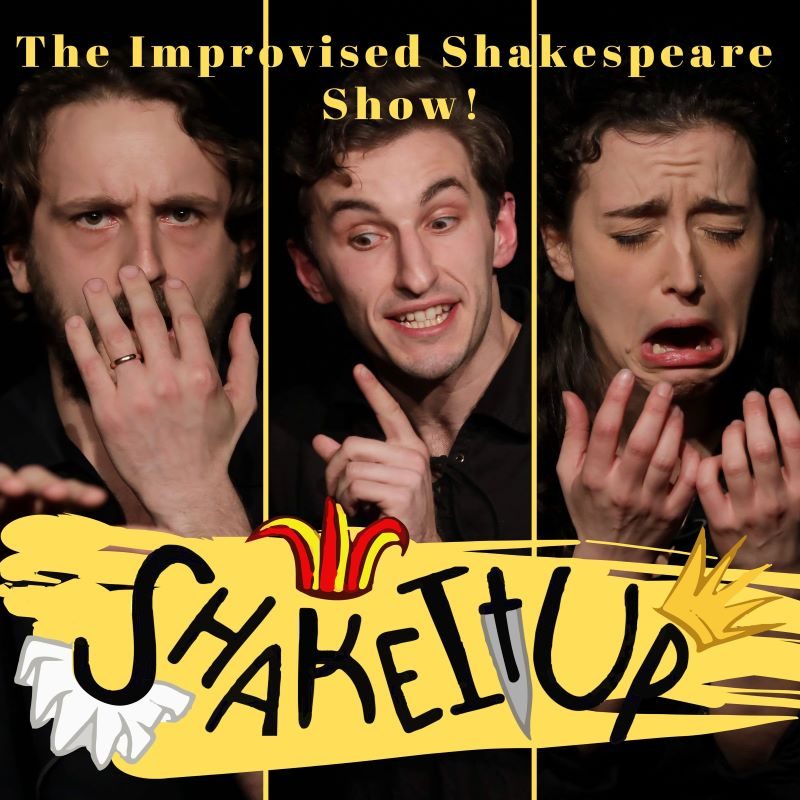 “Stick in some ‘thou’ and ‘henceforth’ bits, and that’s pretty much the Shakespeare done and dusted”

No set, no props, five actors and two musicians in front of black drapes, and some lines from audience members written on paper slips for future reference, and we’re off: ‘The Improvised Shakespeare Show’ from ShakeItUp Theatre.

I saw a version of ‘Macbeth’ in the Hen & Chickens Theatre a while ago, entitled ‘MacBeeth’; (‘Where the place?’ ‘Upon the heath.’/ ‘There to meet with – MacBeeth!’) and now it feels a bit wrong if the witches in subsequent productions don’t end their first scene with that perfect couplet. Other than that, I think Shakespeare has proved himself to be pretty much bulletproof. Whatever performers chose to do to Mr. Shakespeare or any of his works will outlive that interpretation, and no-one needs to worry about damaging his reputation. Which said – there are two aspects of this show, how Shakespeareyany is it, and how good is the improv? On the question of Shakespeare, it isn’t really. The prologue invites the audience to chose a history, a comedy, or a tragedy. We chose history. They asked for a name and a setting, and they picked a very un-Shakespearean name, Keith, and an un-Shakespearean setting, Slough, so “The History of Keith XIII, King of Slough”. Which is funny, because it isn’t at all Shakespearean. Stick in some ‘thou’ and ‘henceforth’ bits, and that’s pretty much the Shakespeare done and dusted. A number of comedy troupes use Shakespeare as a sort of short-hand for Cultural Credibility, and ShakeItUp Theatre are prime examples of that.

Criticising improv is like writing about a tennis match; the important stuff is how quickly the gags get picked up, how well the actors deal with changes, how much humour they can draw out of surprising material, which is better experienced than described. These actors managed that pretty well. They developed a story on the fly, kept it going for sixty minutes, developed some running gags. It made for an entertaining evening. The task of keeping the action going fell a bit unevenly on two members of the five person troupe, which was a shame – part of the joy of group improv is watching the baton change hands fast, and the pace kept dropping. In addition, I would have liked a bit more from the two musicians, because the group improvised songs let them show a collective presence that got somewhat lost in the spoken story-telling.

This is an improv comedy group that name-checks Shakespeare as a high-culture beard for Olde Englishe shenanigans. That matters not at all to Shakespeare, and not much to their improv style. I do wonder if they benefit from the expectation that they will be riffing on actual plays and characters. Would that make it funnier? Spotting references makes the spotter feel clever, and that is an attraction that this show passed up by not referring to anything. Other than that – an hour-long themed group improv. That was funny. But not much to do with Shakespeare.