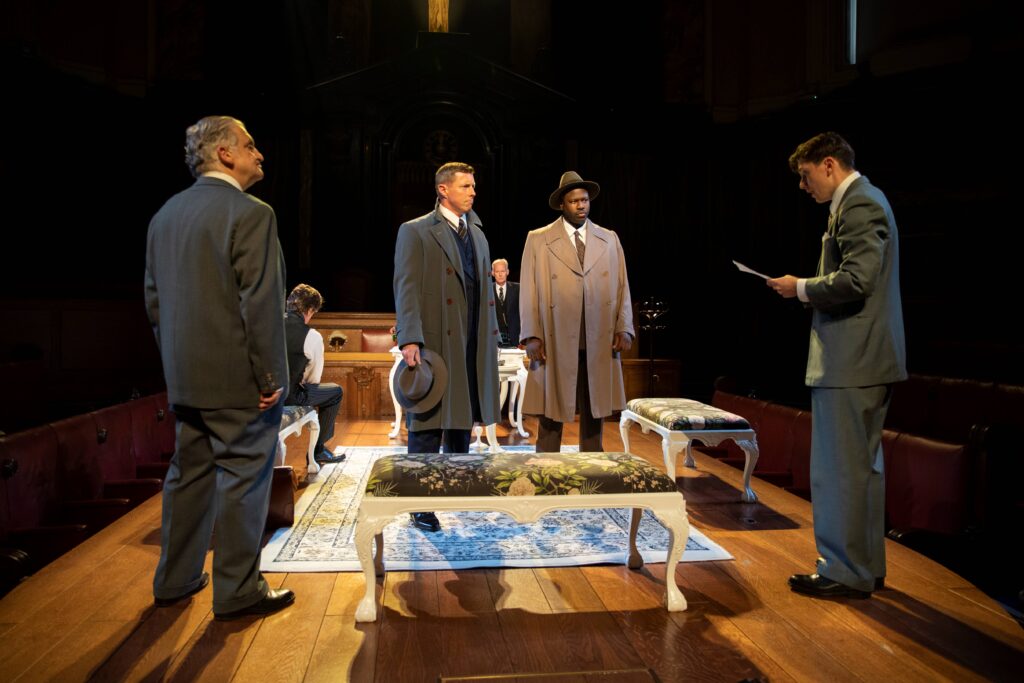 Situated on the South Bank of the Thames, London County Hall is watched over by Big Ben, the Houses of Parliament and the London Eye. Sitting at its centre is the magnificent splendour of the octagonal Council Chamber. Since the First World War it served as the headquarters of local government for London. Back in the 1980s Ken Livingstone would lock horns with Margaret Thatcher while the façade of the Hall served as a billboard for opposition slogans; seen from the austere, Gothic windows of the Palace of Westminster. Today the banners tell a different story, inviting us to witness another courtroom battle altogether. Agatha Christie’s “Witness for the Prosecution”, published as a short story in 1925 in a weekly pulp magazine, was eventually adapted by the author herself into a play which opened in London in the fifties. Lucy Bailey’s unique production has been running at London County Hall for four years now and, although still far behind ‘The Mousetrap’ it looks set to follow suit in its longevity.

We are summoned into the chambers, settling into the leather-bound, high-backed seats; some of us in the gallery and a dozen hand-picked audience members led to the jury’s bench. It is the perfect setting for a courtroom drama. The solemnity of the atmosphere would seemingly leave little for the design team to do, but Chris Davey’s lighting and, in particular, Mic Pool’s chilling sound design immediately let you know the proceedings are about to start. One of the most stunning preludes in the West End then gives way to the action that unfolds before us: a story of truth and lies, guilt and innocence, defence, and prosecution. A tale where words are twisted as ruthlessly as the plot.

Leonard Vole (Joe McNamara), a ‘between-jobs’ mechanic has been accused of murdering a wealthy, older woman with whom he struck up a close friendship. A friendship that Detective Inspector Hearne (Christopher Dickens) casts in dubious shades. Vole’s wife (or is she?) stands by him (or does she?). Sir Wilfrid Robarts takes on his defence and believes in his innocence (or does he?). It would be criminal of me to answer the questions here, though I think I can get away with saying that any second guessing is probably a waste of time.

Agatha Christie was fascinated by the idea of deceiving an audience, and she was an expert at it. We don’t know who’s done what until the very end. There is a huge responsibility for a stage adaptation to respect that, and this cast would have won her trust in the strike of a judge’s gavel. McNamara’s Leonard Vole is the picture of innocence and naivety, digging a hole for himself with his self-proclaimed candid honesty. But you get the sense he has dug his own bunker too, into which he has stashed the real truth. A spell-binding performance that has us questioning as much as the prosecution. Jonathan Firth as Sir Wilfrid takes on his defence with a sparkling, almost camp relish. Firth is a delight to watch, commanding the stage. Most of the action takes place in the courtroom but some of the most poignant scenes take place in Wilfrid’s chambers. The banter between Firth and the wonderful Teddy Kemper (playing defence lawyer Mr Mayhew) gives a true insight into the dichotomy and duplicity required to tread the boards of the courtroom.

Into this world steps Romaine Vole, the German refugee wife of the accused, shaking the foundations of this male oriented inner circle. Emer McDaid’s coquettish, cool, calculating charisma confounds both the council and the audience. She supports her husband’s alibi, then denounces it, then… well – my lips are sealed. She is a woman you ‘wouldn’t trust with your laundry’. A riveting performance, in line with the rest of the cast. Lighter moments are thrown in with precision timing, courtesy of Martin Turner’s dry and sardonic Mr Justice Wainwright.

Lucy Bailey’s staging is inspired, clever and inventive. Despite the head start she was given by the setting. As the play nears its close the jury are asked to deliver their verdict. You think that’s that. But no, there’s more. I shan’t reveal what the summing up is. But, ladies and gentlemen, you should have no difficulty reaching your verdict on this glorious adaptation. It really must be witnessed. 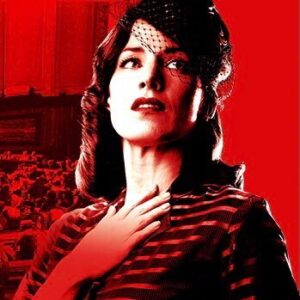