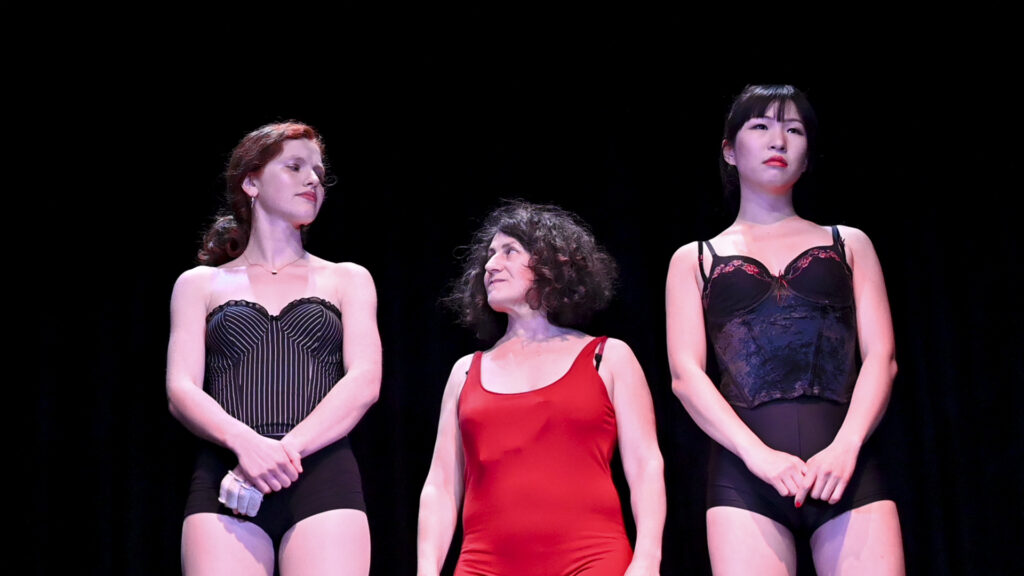 I am very confused about my feelings on this show. On the one hand, the chaos and slap-dash feel seem to be deliberate – it might even be the whole point, and that being the case, it’s very effective. Not to sound intolerably pretentious, but it smacks a little of the Dada movement’s Cabaret Voltaire, which prided itself on chaos, anarchy and experimentation.

Ms Paolini herself is very endearing. Beginning the show in black bicycle shorts, net tights and a fascinator, she announces proudly, “I’m fifty two, I’m a woman, and I’m fine with that, thank you very much.” Moving from one digression to the next for the first twenty minutes or so, I genuinely have no idea what she’s talking about. But maybe that’s the point? Regardless, she has the audience on side, everyone trying desperately to follow what she’s saying.

She is joined on stage by her two co-hosts- a young woman sporting a corset and matching fascinator, and a gentleman in his fifties who starts off wearing a suit, but who quickly strips off to match the women (in a fashion) in tighty-whities, a vest, and a silk red tie. The three remain on stage throughout as a visible audience for the other performers.

The patchwork of acts includes some who are purposefully subverting the usual cabaret performance: Irie Feather, for example, conducts an incredibly depressing strip-tease whilst singing a very ropey version of ‘Feeling Good’. She then decides she’s not feeling that good actually, rips off her nipple tassels to reveal gaffer tape crosses, and proceeds to finger-paint herself black to a heavy rock accompaniment.

There are other acts, however, that aren’t quite subversive but just a bit mediocre. It’s hard to know whether this is a choice, to keep everything rough around the edges, to steer away from anything too polished – the show describes itself as “deconstructed cabaret” after all. But the final performance is multi-percussionist Beibei Wang whose act is very polished, and quite amazing to watch. The contrast in quality between her and some of the previous acts is a little stark…

Between the acts, however, Ms Paolini and her co-hosts maintain an absurdist quality, performing often inexplicably funny sketches – dressed in ballgowns, for example, sniffing around the stage to ‘Mission Impossible’ style music which occasionally cuts out, for them to wail, “I need a boyfriend!”

Regardless of the individual acts, Ms Paolini’s charming and comedic patter bestows a delightfully nonsensical quality on the evening, bringing together a family of misfits, where the audience feels more like a community. Granted this is by no means a traditional cabaret, but it doesn’t want to be. Expect plenty of provocation, explorations of the ridiculous, and a good dose of confusion.