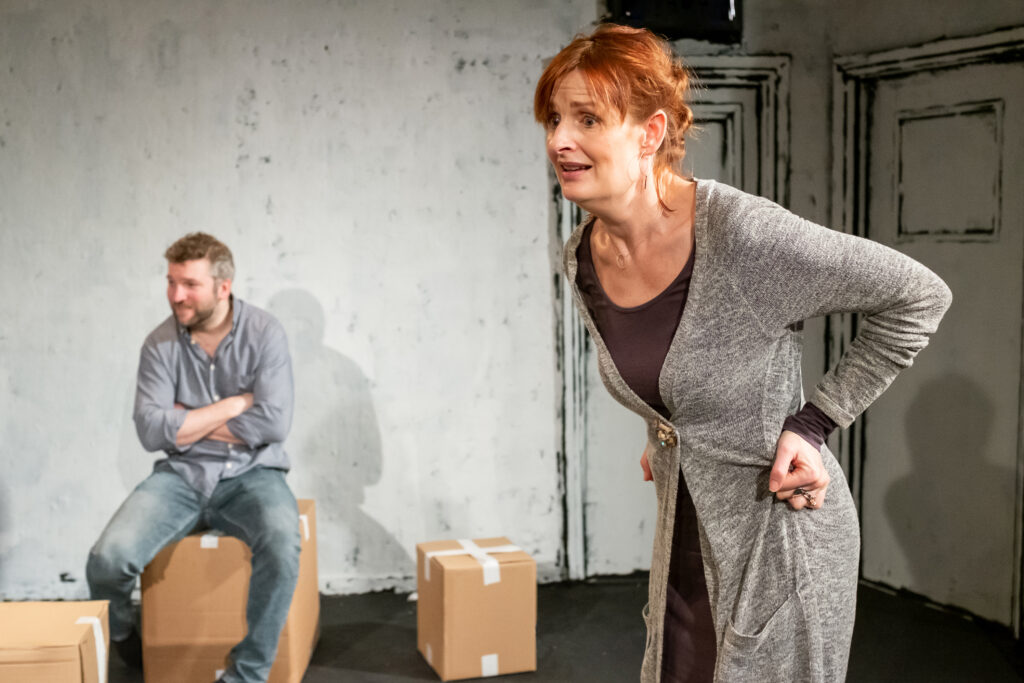 “At times there is a distinct Twilight Zone vibe, with the exact setting a mysterious and surreal uncertainty”

Airing dirty laundry in public is rarely a helpful exercise. But in Rosalind Blessed’s new play Lullabies for the Lost the sharing of secrets and anxieties becomes a step on the path to healing.

The piece is being staged in rep at the Old Red Lion Theatre, Islington (alongside her play The Delights of Dogs and the Problems of People), with chances to see each piece separately or across an afternoon and evening.

The two plays complement each other and Blessed has suggested that they exist in parallel realities. Significantly they both feature canine heroes, dogs which play their part in helping troubled people to move on, offering unconditional love.

This longer and newer play is more obviously about mental health, inhabited as it is by eight very different people relating struggles ranging from eating disorders to childlessness through depression and anxiety.

On an effective clinical white set (Anna Kezia Williams) on which white boxes are scattered and used for furniture eight characters are in search of an escape from their various issues. There is a sense that sharing with others is an important part of the process but it is initially unclear who they are – a gathering of supportive friends? A therapy group? A heavenly waiting room?

As each tells their story they gaze at a locked door hoping that this time it will open and allow them to exit rather than constantly having to relive their narrative. At times there is a distinct Twilight Zone vibe, with the exact setting a mysterious and surreal uncertainty.

For one, apparently newer, member of the group, Larry (a performance of studied apprehension from Chris Porter) there is a fear of going out, a secret demon urging his nervous side not to bother.

Another, Nerys, (Kate Tydman) has turned to collecting – not hoarding, she assures us – envious of a rat in her house who can have hundreds of babies while she constantly suffers miscarriages.

Then there’s Sarah (Helen Bang, exuding a confidence plagued by low self worth) a sensitive and lonely soul who has given up on love, wrapping herself in cotton wool of banality, and “Brothers Grimm” Tim (Liam Mulvery) and Jez (Nick Murphey), both having contemplated suicide but each unaware of the other’s state of mind.

As emotions are laid bare we understand the importance of communication, the need to share and concentrate on the light rather than the darkness. Shades of lighting (Mark Dymock) contrast the brightness of the characters relating to and opening up to each other and the relative dimness of inner conflict.

Rosalind Blessed plays Robin, a bulimic suffering from low self image, while Ash (an edgy Duncan Wilkins) is a cynical and sarcastic anorexic confined to an eating disorder unit.

It is only when we hear from Andy (a powerful and ardent Chris Pybus) that we sense anyone sees light at the end of the tunnel. Although feeling that he is stuck in mud, a rescue dog helps him to look beyond himself and his self-judging depression.

Blessed’s writing ensures that each of these people matter and the audience (occasionally addressed directly) are on their side, not only wanting them to face up to their anxieties and inner conflicts but to conquer them.

While often uncomfortably intense there are welcome bursts of humour and a relief that these likeable individuals encourage one another to be positive and hopeful.

As “Ma” appears (a warm film cameo from Blessed’s mother, Hildegard Neil) as an affirming voice from beyond confinement, there is a crucial message about sharing issues, not wasting life, the value of looking for purpose through beauty, love, nature, laughter, art and sport instead of meaningless self-obsession.

Lullabies for the Lost is a wise and important contribution to understanding mental health issues, not least underlining the valuable and vital role of sharing and realising you need never suffer alone. 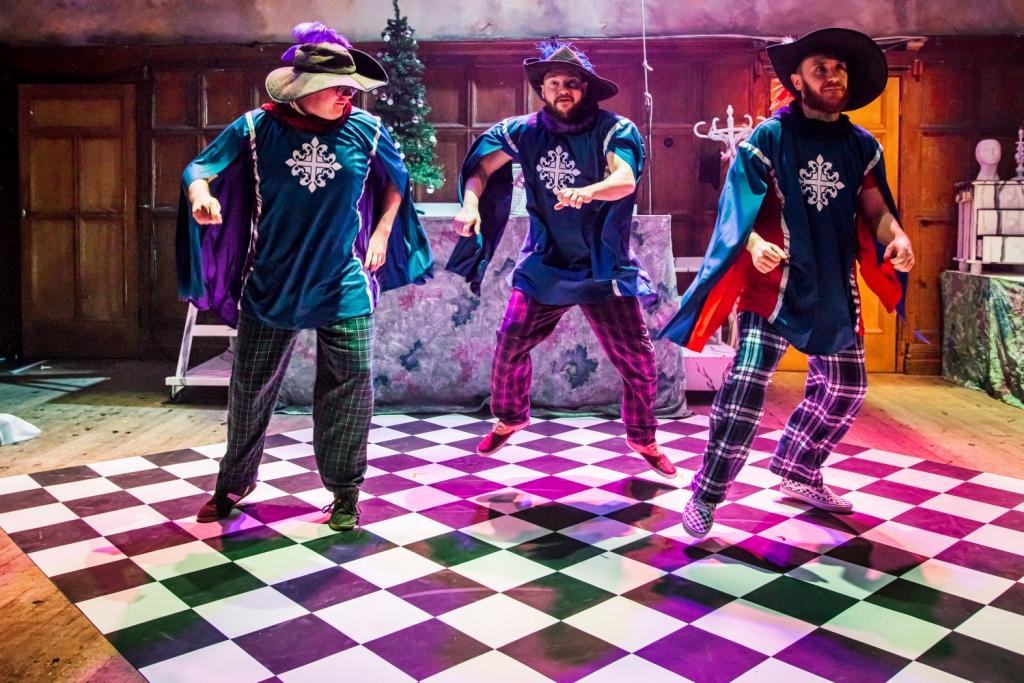 Goldilocks And The Three Musketeers

“absurdly nonsensical but utterly brilliant – and definitely a case of all for fun and fun for all!”

A madcap mash-up of popular stories becomes a seasonal rib-tickling romp in the hands of a talented trio who could have walked straight off the set of The League of Gentlemen.

The insane Goldilocks and the Three Musketeers is the third Christmas show of its kind from Sleeping Trees and it’s worth trekking to Battersea Arts Centre to catch this energetic, daft and delightful production.

Within minutes the fairytale of Goldilocks and the Three Bears gives way to an imaginative saga in which an evil Alice (now Queen of Wonderland) has stolen the happy endings from lots of familiar stories, embittered by the fact that she doesn’t get a decent conclusion to her own book but just wakes from a dream.

Along the way to saving the day Goldilocks meets a host of well-known characters, from a remonstrative Mad Hatter (fresh out of tea-hab), a BFG reduced to size, a musical Greatest Snowman, singing elves and boyband Musketeers.

The story shoots off in many directions, yet never loses its way. Indeed, it’s a very well-crafted plot which – like good pantos – has plenty to appeal to the children yet remembers there are also adults wanting to be entertained in the audience.

Writers James Dunnell-Smith, Joshua George Smith and John Woodburn are an indefatigable trio bringing it all to life magically and confidently, aided by composer and performer Ben Hales, about whom we learn some fascinating facts which may nor may not be relevant to the unfolding drama.

Smith has more than an air of Christopher Biggins to him, “eggshelling” at playing a cracked Humpty Dumpty and others with an impish glee. Dunnell-Smith is an innocent but feisty Goldilocks, while Woodburn is a truly wicked Alice as well as channelling Hugh Jackman extraordinarily well to play the singing Snowman on a hunt for a carrot to give him a nose.

The three work together exceptionally well, showcasing to stunning effect their surreal, physical and pacey comedy credentials. So relentlessly engaging and entertaining are they that adults are more than likely to want to see their touring shows for the older audience during the year.

It might be a show for children but there is no playing down to anyone. All of the audience are drawn in to participate somehow and the trio all manage to handle any reaction from young watchers.

Director Kerry Frampton holds the reins, seemingly working on the basis that the barmier the better and the result is a happy ever after story that makes Shrek look like Andy Pandy.

Set and costumes (Zahra Mansouri) are creative and awesome, with moveable furniture able to transport viewers from South to North Pole, Wonderland through the rabbit hole and a backpack pocket. Lampshades become mad hats, porridge bowls are turned into helmets and a wardrobe becomes a portal to all manner of worlds (take that, Narnia!).

The costumes are works of art in themselves, none more so than Alice’s split personality blue pinafore dress blended with a Red Queen of Hearts outfit.

Battersea Arts Centre has a pleasing “relaxed performance” ethic, which is good when tinies get bored (though there’s little chance for that in this show) and need to be taken out. Or perhaps when they get restless because they need – as do the French Musketeers – a “Yes!” (think about it…)

It’s absurdly nonsensical but utterly brilliant – and definitely a case of all for fun and fun for all!

Goldilocks And The Three Musketeers