“Whilst it didn’t have my sides splitting, it’s still a fun way to spend an evening”

The idea is this: you take five classically trained actors, spend weeks and weeks rehearsing a Shakespeare play, then, come showtime, for every performance one cast member gets ten out of ten drunk- or at least a solid seven and a half- and hilarity ensues.

Our drunk for the evening is David Ellis, playing Hamlet, and I can confirm he was definitely drunk – a point of contention in previous reviews. The script often seems to get in the way of his good time and he gets in to a rhythm of reciting his very wordy monologues double-time so he can get to the fun bit: licking his co-actors and throwing stuff at the audience.

The compere, Beth-Louise Priestley, spends much of the show ushering Ellis on and off stage, ensuring he’s polite to the rest of the cast and doesn’t throw anything too heavy at the audience (he does accidentally lob a book but I’ve been assured no audience members were hurt during this production). She is clearly genuinely enthused but I suppose owing to the fact that Sh!t-Faced has been running as long as it has, some of her lines feel a little over-rehearsed and sometimes she struggles to inject the necessary spontaneity in to her delivery.

Magnificent Bastard Productions has been running Sh!t-Faced Shakespeare now for a good few years. I imagine they kept coming up against the fact that the success or failure of the night is very much dependent on whether the drunk is a funny drunk. Otherwise you’ve got an inexplicably abridged Shakespeare play with one person who can’t remember their lines and just wants to take a nap. Not super fun. So, their solution is to make the whole script a bit silly; give the sober actors a chance to crack a joke or two. Unfortunately, this means there’s much less room for genuine improv and you can’t tell if the drunkard is cracking their own joke or reciting the script. You would think that the point of it being Shakespeare is that it’s traditionally very serious and stuffy, and adding a drunk person gives a good dose of giddy unpredictability. But if the script is already farcical, it comes off a bit like a touring school production – a way for the kids to get excited about an old play.

It feels a little formulaic but I suppose that’s to be expected when what started as a raucous fringe production moves to a West End theatre. That said, the cast still seem to be having a great time and they are obviously genuinely fond of each other which makes all the difference with improv.

Whilst it didn’t have my sides splitting, it’s still a fun way to spend an evening. Make sure you’ve got a drink in hand, this is not ideal for a sober night out. 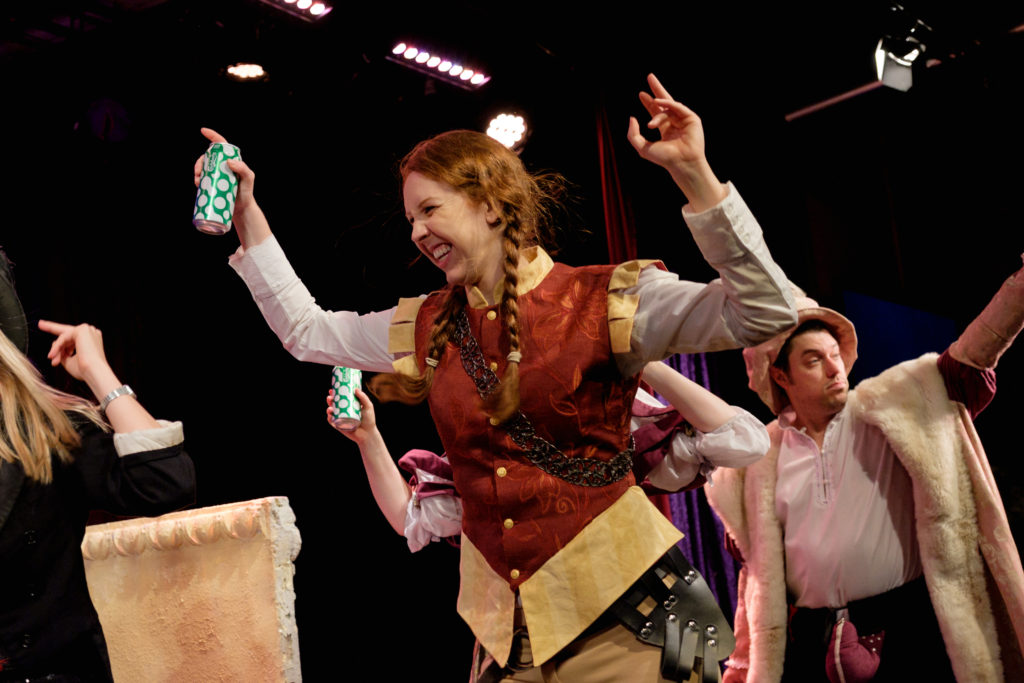 “a fun, accessible and irreverent approach to Shakespeare”

I’m sure you know the story of Romeo and Juliet, two star crossed lovers whose story ends in tragedy. Well this is that, with a difference. Tonight’s show is set in “fair East London” and performed by five classically trained actors, one of whom’s sh!tfaced drunk. Our compere opens the show with some audience participation, including choosing someone in the front row to hold a large bucket, just in case.

Cleverly, we do not know which actor is going to be drunk, so the play’s opening begins as a guessing game, as the audience tries to identify who it’s going to be. It is made more obvious when a drunken Juliet stumbles onto stage, struggling through a pink and purple velvet curtain to make her entrance. Meet Juliet, as you have never seen her before: she drinks beer, cartwheels and definitely shouldn’t be given a knife. This is a fun, accessible and irreverent approach to Shakespeare.

A bit more of an emphasis on the actual Shakespearean text would’ve helped, something which seems to deteriorate over the course of the play. Juliet, played tonight by Beth-Louise Priestley, drunk as she is, seems to actually be getting more of her lines out than the rest of the cast. At moments, it feels like the sober actors are trying to match Juliet’s state and consequent performance. Playing these roles more genuinely would highlight the gap between the reverence usually used when discussing the works of Shakespeare and the irreverence of this addition to the play. It would also make Juliet’s drunkenness even funnier, by virtue of contrast.

I really like that the humour does not revolve solely around one actor’s inebriety, and some of the strongest moments are when characters find scope for humour in Shakespeare’s language, laced with innuendo. The production demonstrates much of this through the wonderful use of visual comedy, including moments that feel fantastically slapstick. This is where the humour for the other actors lies, it’s already in the Shakespearean text, and does not, therefore, need to be found in uncommitted overacting. This is a shortened version of the play, but the pace at points feels overly rushed, particularly in the second half, and again a more competent approach to the play itself would ensure that the drunken performance can shine in a strong framework of support.

Ultimately though, this is theatre and a night out in one, hilarious, clever and Shakespeare like you’ve never seen it before.