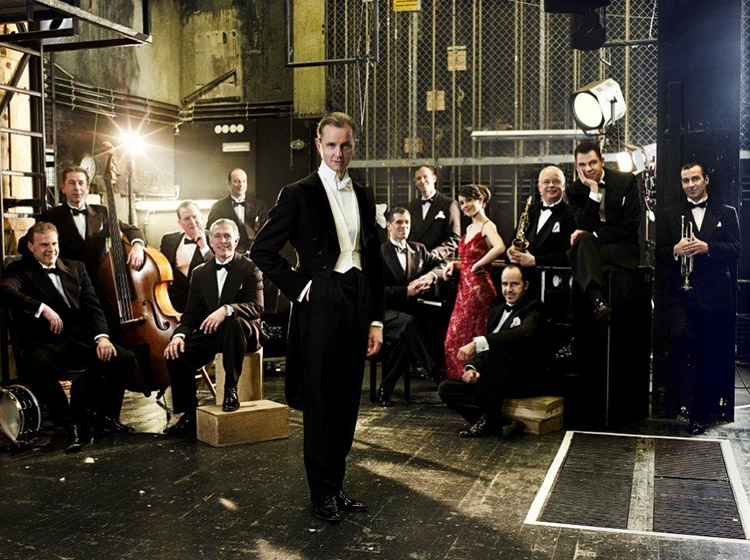 It has been a century since the world woke up to the dawn of the ‘Roaring Twenties’. F Scott Fitzgerald penned it the ‘Jazz Age’; an age of ‘flappers’, prosperity and the birth of pop culture, with an unprecedented output of music that is still in full swing today. The spirit is reborn at Cadogan Hall for Max Raabe’s only London date of a UK tour. A slim, dapper figure in white tie and tails, Raabe strolls onto the stage and purrs, rather than roars, through his set which transports you right back into Weimar-era Berlin. Backed by the immensely talented Palast Orchester the evening is a sumptuous show of nostalgic musicianship imbued with warmth, magic and many moments of wry comedy.

The first thing you notice is his voice; a mix of liquid gold and velvet moulded into a cut glass confection of global RP, reminiscent of the great cabaret showmen such as Leslie ‘Hutch’ Hutchinson. It drops an octave when he speaks, delivering a delicious deadpan, world-weary introduction to the songs. With pauses and beats as precise as his band, his comic timing is metronomic.

Max Raabe moved to Berlin in his twenties to study opera, financing his studies with small performances and in 1986 he founded his thirteen-piece Palast Orchester with fellow students. Their commitment to presenting their repertoire in the original arrangements (Raabe used to scour the flea markets for old sheet music and 78 records) has led them to becoming the leading exponents of the dance band music. Celebrating music from both sides of the Atlantic he opens the show explaining that he chooses the songs that ask the important questions in life; “How do we find one another? How do we get to know one another? And how do we get rid of one another?”

If I were to list the highlights of the evening, I would just be reeling off the entire set list. Kurt Weill’s ‘Mack the Knife’ stands out and perfectly illustrates the band’s authenticity. Stripped of its pop-jazz complexion it has acquired over the years, the accompaniment is restored to its mournful, scraping original. All the greats are there too; Cole Porter’s ‘Just One Of Those Things’, Jerome Kern’s “I Won’t Dance”, made famous by Fred Astaire, to whom Max bears a resemblance – even though he resolutely adhered to the song lyrics’ advice and didn’t dance. A legato “Just a Gigolo” opened with Cecilia Crisafulli on solo violin, then sung in German before segueing into the tantalising tango of ‘Varum?’. Gene Kelly’s ‘Singing in the Rain’ closes the first act, a comic moment provided by percussionist Fabio Duwentester’s (intended) skirmish with a rebellious set of tubular bells.

The musicianship is second to none and each band member is given a moment to shine in the second act’s opening number – a musical stew that brews and gains flavour as each instrument is added. The sublime Crisafulli leads on violin, giving Stéphane Grappelli a run for his money, followed by piano, guitar, trumpet, double bass, rhythm and finally the full brass section. It is a varied set, rich in technique and harmony and inventiveness, yet the band and Max Raabe camouflage their expertise with a delightful casualness that lets us enjoy the music on its own terms. “The music was written to take the audience away from their everyday problems” Raabe says. His aim is to transport us out of reality, and we are more than willing to be led by his outstanding performance into his world. They boast a repertoire of over six hundred songs – I would have happily remained to hear them all, but the time restraints allowed for just two encores.

Max Raabe is a million selling star in his native Germany. Apparently, this is his first UK tour. Surely it won’t be long until he croons his way into being a household name over here. A sublime, poignant and uplifting evening. 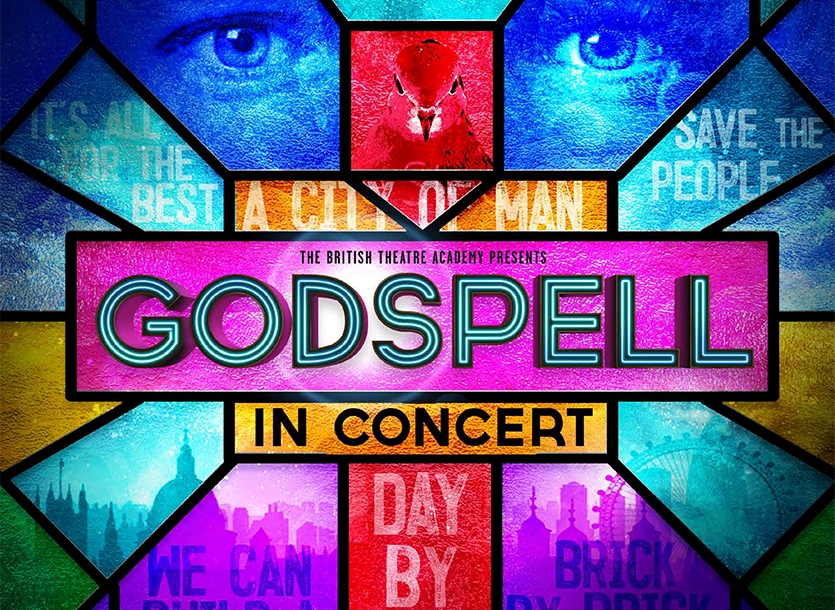 Godspell is a 1971 musical written by Stephen Schwartz. Based on a series of Bible parables, it has been revived countless times and seen by millions. A successful film version emerged in 1973, the same year that Andrew Lloyd Webber’s Jesus Christ Superstar also hit cinemas. Directed by Dean Johnson, this semi-staged version by the British Theatre Academy saw those popular songs performed by a huge ensemble of teenagers (representing a community of disciples) and a handful of West End and TV star guest singers. Their renditions were interspersed with scenes of the younger folk partially acting out the teachings of Jesus.

The youthful bias offered the huge plus point that the show was bursting with energy. But on the downside, some of the vocals were better than others and the sound was at times painfully shrill. There was no set to speak of, but visual interest came from the bright neon technicolour clothing (Day-Glo tops, tie-dyed T-shirts, rainbow-striped leggings) and sparkling accessories. A five-piece band (coordinated by musical director James Taylor) played with gutsy efficiency, but the sound was fairly muddy from where I sat (eight rows back).

Although the songwriting and the overall concept retained a very dated early-1970s feel, there were admirable attempts to modernise the material. For example, it was a nice touch that the show began with seven of the performers wielding mobile phones, texting and scrolling as they debated religious philosophy. A less successful contemporary element was the moment in which, if I’m not mistaken, a Donald Trump impersonator was condemned to Hell by a group of Mexicans he had wronged.

Jesus was surely one of the most charismatic men who ever lived. It’s difficult to reconcile that image with Luke Bayer’s slightly underwhelming figure reading out his lines from an iPad. There must have been an awful lot of lines to learn, it’s true, but you’d expect these words to emerge from deep within his soul rather than be cued by an interchangeable gadget anyone has access to. It eroded any sense of the commanding presence such a figure would exude.

The production also suffered from the lack of a narrative arc or any real emotional complexity. Despite ending with the crucifixion (and controversially not the resurrection), the bulk of the ‘story’ is just a series of simplistic preachings – lively, unrelated episodes that could have been delivered in any order without changing the overall effect. And the much-needed flashes of wit (a parable rendered as interpretative dance, children pretending to be goats and sheep) are little more than temporary diversions from an unrelenting sequence of moral lessons. How much you can take away from those lessons is a personal matter, of course, depending on your theological stance. But if you know the teaching of Jesus already, do you really need to hear them presented this way? And if you aren’t aware of them, is a loud rock/gospel musical the best way to take on board that guidance? Beyond the hordes of clearly delighted parents in the hall (enhancing the feel of a well-presented school play), I wasn’t sure who this show was intended for. Christians might consider it too flippant and irreverent. And non-Christians are unlikely to have the patience to sit through so much of the New Testament, however catchy songs such as ‘Day by Day’ might be. In 2019, religion is a divisive, often contentious business, so a more nuanced treatment of the topic would have been welcome.

The best parts were when they kept it low-key and immediate. When one of the performers rapped over a rhythm built from the ensemble’s perfectly coordinated claps and foot stomps, there were a few seconds of real dynamism. And there was an endearing interlude in which a member of the audience was brought on to the stage without warning, handed his lines on a prompt card and made to play the part of Lazarus.

No one can deny the sincerity and goodwill behind the production, nor the obvious vitality of the cast, but Godspell came across as a wearyingly one-dimensional affair. Sadly, it was very much a case of preaching to the converted.