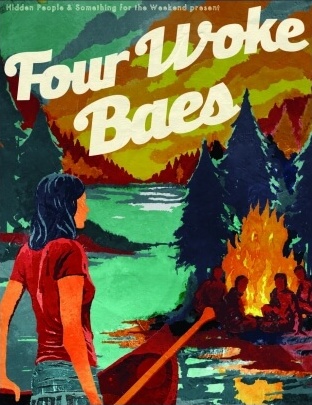 Four Woke Baes, written by Jonathan Caren, directed by Teddy Bergman and presented by Hidden People; the show features the true story of four men on a stag party drinking beers and barbecuing out in the woods. Everything changes, however, when an alluring female approaches their campsite.

The show builds in awkward tension and uses the breaking of this tension to create most of its comedic moments. None of the guys are particularly good at holding a conversation with Emma (Lyndsy Fonseca) not just because of her ravishingly “symmetrical features”, but because of her vastly superior intellect and ability to dissect each of the guys’ behaviour. So a large amount of this performance sits you in a pool of awkwardness, begging to be alleviated by someone. Oftentimes, Boardman (Quincy Dunn-Baker) is the person that provides this. Dunn-Baker’s performance has the audience in hysterics as his heavy-handed comments land at almost perfect moments to assuage the tension in the room. However, some of the more pure comedy for comedies sake moments aren’t as sound and serve, in the context of the quality of the performance, to feel slightly cheapening.

Consistent brilliance shines from each of the actors as they work through a well-written story to hook you in. Learning about each of the guys’ lives through Emma’s diagnosing of them helps to build a strong connection to each character. When the show reaches its precipice, a do it or don’t do it moment, you can hear a pin drop… it’s skin-crawlingly tense.

Emma’s soothingly calm yet aggressively inquisitive demeanour often has the guys on the back foot and being very defensive. Though the conversation is not often elevated into any form of argument, you can feel the unwillingness of the four men to allow themselves to be read by, or to learn from, a woman. The piece’s overall tone appears to be one of a feminist nature, and achieving this with a male-dominated cast is incredibly impressive.

Colin Grenfell’s lighting and Jeff Gardener’s sound design are a highlight of the play, being integral in creating a natural feel to the performance. Together, they ease the piece through time and slowly travel from a sunset evening into the dead of night. It is done so carefully and concisely you almost don’t notice it happening, such understated and considered tech is hard to come by.

Four Woke Baes is an exceptionally interesting piece. Knowing that the story is true, you feel as if you’re watching some of the most intimate moments of a person’s life, which is quite a unique feeling. It’s a clever, awkward and incredibly tense comedy but overarchingly is a thought provoking piece of theatre. 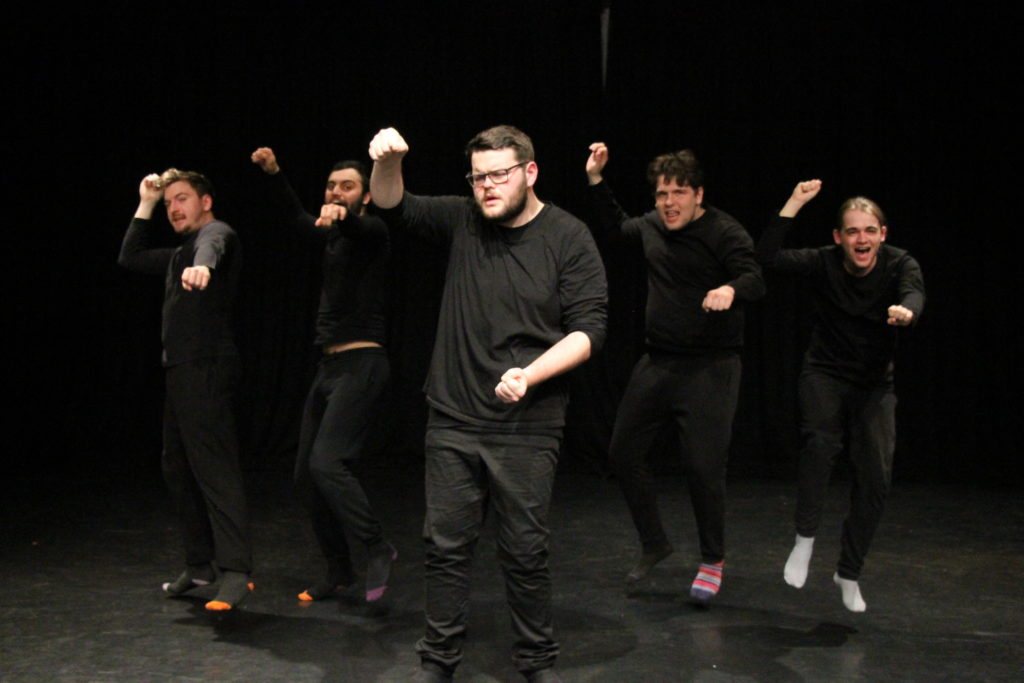 “In such an absurd story, the cast quite literally lose the plot, but the diversions are welcome, leaving the audience in hysterics”

In this warped retelling of Eric Carle’s childhood classic, a loathsome, very hungry caterpillar fails to metamorphose as no cocoon will stretch around his bulging belly. Instead of becoming a handsome butterfly, the Caterpillar King (Nathan Charles) is a raging tyrant with a hunger for raw red meat. When the king meets his match in a beautiful butterfly queen (Ted Vaudrey) from an alternate universe, the servile Steve (Murray Burgess) – or is it Simon? – nervously suggests the king share his food with his kingdom. Will the king impress the queen and secure the long-term relationship he desires?

From the first rhyme spoken in unison, The Very Well-Fed Caterpillar is high energy and high speed. Movement sequences are slick and well-rehearsed to match crafty writing which introduces the setting and tone of the piece concisely. The pace gives an impactful start, but it does turn out to be a detriment as gags are missed throughout the play. With such an abundance of quickfire jokes the enunciation of all the actors could be improved. Aside from this and a few dad jokes that fall flat, the play is laugh-a-minute with popular references to Shrek and Star Wars, and a spot-on impression of Gordon Ramsay in Hell’s Kitchen. You could definitely get more from this show with a second watch.

The world Red Biscuit Theatre create is bonkers but relatable, featuring some tense group work and a passive aggressive exchange over the decision to name a character Neil. Theo Moore and Craig Unadkat are particularly funny multi-rolling as doors, a bell tower and conflicting members of the Cape Caterpillar Liberation Club. Human props play a large part in the story, used nicely both to transform the blank stage and as an illusion that can be deconstructed for comic relief. In such an absurd story, the cast quite literally lose the plot, but the diversions are welcome, leaving the audience in hysterics. The hour of silliness is definitely enjoyed by the cast and audience alike, which is a thrill to see.

Most impressive is how the company deliver a moral message of redemption amidst their twisted tale. Their ability to devise this Pythonesque physical comedy from the loose plot of a children’s book suggests some promising future work from the troupe.