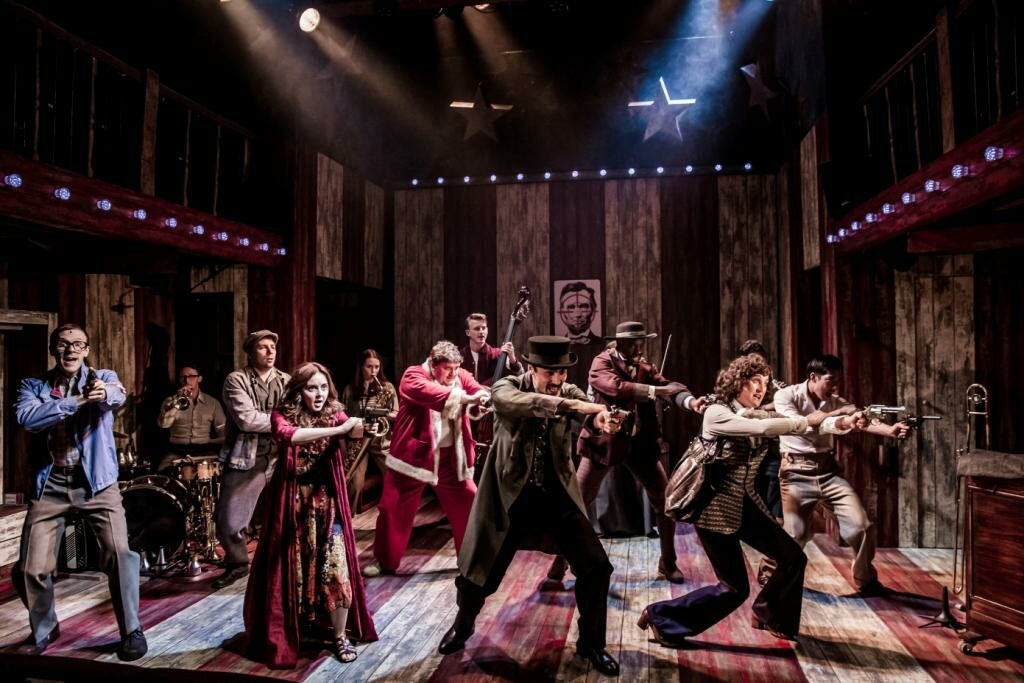 “knocks the socks off the original cast recording”

“Attention must be paid”. Towards the end of his musical ‘Assassins’, which had a triumphant performance at the Watermill Theatre in Newbury last night, the legendary Stephen Sondheim quotes this line from Arthur Miller’s ‘Death of a Salesman’.

‘Assassins’ is a musical that asks just exactly what would make ten Americans want to kill eight Presidents, from Lincoln to Reagan. The answer lies in that quote, which neatly also describes the audience’s rapt concentration during a quite extraordinary show. And if you are thinking that the killing of presidents and the fate of their would-be assassins is a rather macabre subject for a musical, be re-assured. Although it carries a 14+ advisory, this is an altogether entertaining and most thought-provoking show.

The Watermill has a history of championing eight times Tony award-winning Sondheim, whose work is held in such awe that even the most august critics are reduced to scrabbling autograph hunters in his presence. ‘Assassins’ is by no means his best-known work, but it is perhaps his most intriguing.

Not long into the piece, which had its premiere off-Broadway in 1990, the character of the Balladeer (here played with great presence and likeability by Lillie Flynn) sings “Every now and then the country goes a little wrong. Every now and then a madman’s bound to come along” And if you are thinking that line has more than a little resonance today, I suspect Sondheim would agree with you.

Space is tight at the Watermill, making any performance an intimate and involving experience. Director Bill Buckhurst has cleverly used a Coke machine to replace the fairground shooting gallery specified in the script, and Simon Kenny’s set design is starkly effective, with some ingenious twists towards the end.

It’s a little invidious to highlight standout performances in such a tight ensemble work, but several deserve special mention. Steve Simmonds’ has two brilliantly intense monologues as Samuel Byck, who planned to hijack a 747 to kill Nixon. Zheng Xi Yong gives a sinuous and wonderfully committed performance as Giuseppe Zangara who attempted to assassinate FD Roosevelt.

Evelyn Hoskins (Lynette ‘Squeaky’ Fromme) and Sara Poyzer (Sarah Jane Moore) have some excellent scenes. Poyzer plays a cookie ex-Fed, nicely contrasting with Hoskins’ weed-toting take on mass-murderer Manson’s moll. Eddie Elliott has a powerful charisma as Charles Guiteau, especially in the difficult key-changing number he sings so brilliantly just before his character walks to the gallows. Joey Hickman has a menacing glassy-eyed demeanour as the Proprietor of this captivating parade of human failings. Alex Mugnaioni is eerily compelling as ‘the pioneer’ – the first Presidential assassin, John Wilkes Booth. Ned Rudkins-Stow has the task of bringing to life John F Kennedy’s assassin, Lee Harvey Oswald. The traumatic impact of this murder on the American mindset resonates to this day, and Rudkins-Stow’s lean interpretation makes it crystal clear that Oswald was a simple-minded victim of manipulation.

Catherine Tyler is responsible for the compelling orchestration, which makes the most of the entire cast’s astonishing musical abilities, requiring some of them to play one instrument whilst holding another, and to jump seamlessly from drums or keyboard to appearing centre stage. Expert choreography by Assistant Director Georgina Lamb ensures it all works smoothly.

This version of ‘Assassins’ knocks the socks off the original cast recording and is strongly recommended.

Photography by The Other Richard 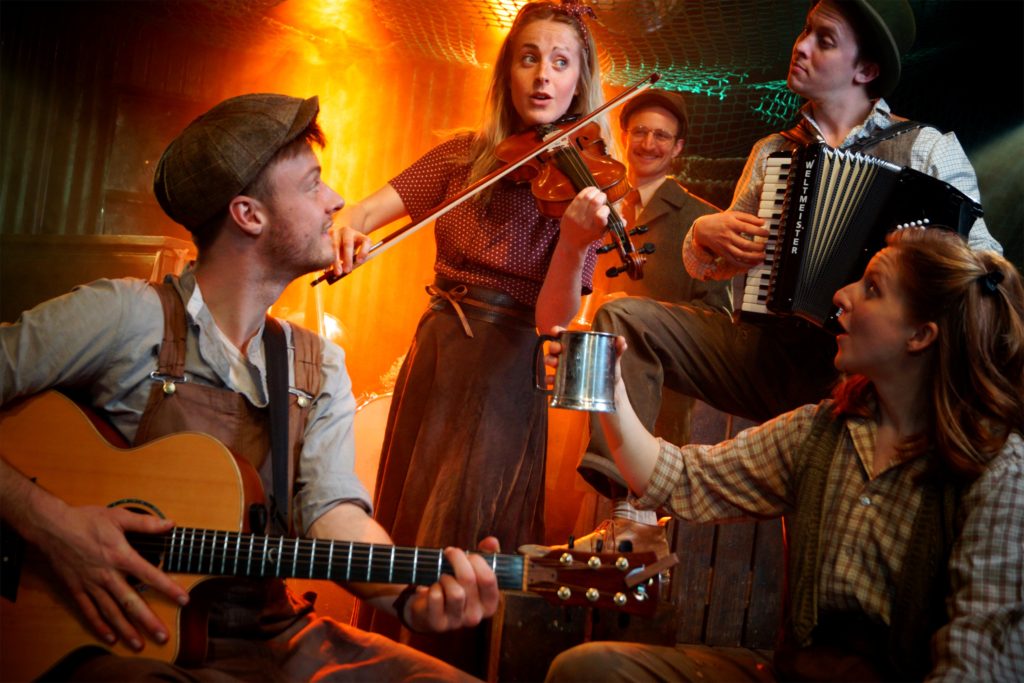