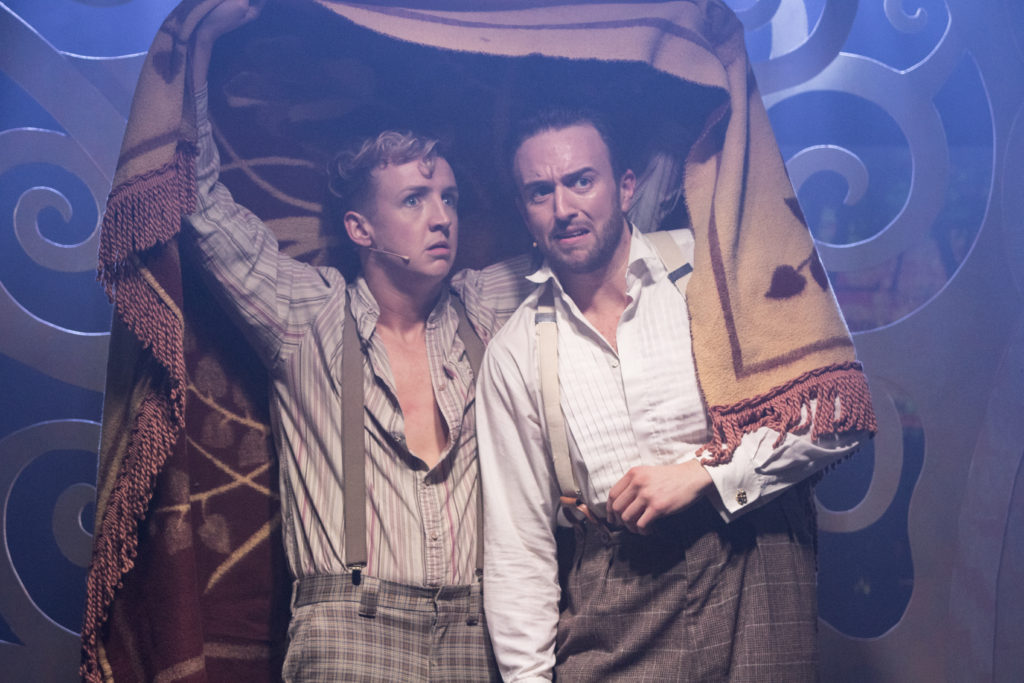 In the heart of Vauxhall, Above the Stag Theatre has established itself as the only professional LGBT+ theatre in the UK with Artistic Director Peter Bull introducing some exciting productions. Romance Romance is a revival of the 1980’s Broadway original, with book and lyrics by Barry Harman and music by Keith Herrmann. Marketed as a reimagining told through the exploration of gay attraction and relationships, this two-act musical offers two very different stories both connected by the theme of love. Act One, The Little Comedy, is set in 19th Century Vienna and provides a light-hearted, farcical story of two people who upon adopting new personas fall in love. Act Two jumps forward to a contemporary setting in The Hamptons for Summer Share, which explores the complexities of love through the possibility of an affair.

First and foremost for a small production this musical packed as much energy as any West End show I’ve attended. The driving force behind this was the cast of just four performers (Ryan Anderson, Jordan Lee Davies, Alex Lodge, and Blair Robertson) who each threw themselves into this production heart and soul. Powerful performances from all but notably Ryan Anderson who brought the house down with his solo number ‘How did I end up Here?’ Some fantastic casting as the dynamic between the four was electric, and by the end of Act Two, the idea of this being a reimagining as a means to explore gay attraction is so far out of the picture, it was as if it was meant to have been written this way. Act Two really stood out because of its exploration of love, emotion and the complexities of relationships offering something we can all connect to regardless of your sexual orientation.

The direction (Steven Dexter with Summer Strallen as associate director) ensured the absolute most was made of all available space which doubled the size of the production as it burst out from every part of the stage. David Shields’ smart design allowed for the set to be transformed in front of our eyes, transporting us from Vienna to The Hamptons in a blink of an eye. Live music filled the room from upstage where the band sat playing for all to see, emphasising just how much can be achieved in a studio space. The lighting design (Jack Weir) added another layer which allowed for us to be transformed from the character’s private thoughts to new locations. The production made the most of all it had and then some.

Overall this musical was very sharp and full of life. My only wish is that it could be realised on a bigger scale as it has so much to offer. Act One offers you fun, songs, silliness and dance with Act Two bringing the heart and soul; a musical of two very different halves but with something for everything!

Above the Stag until 6th April