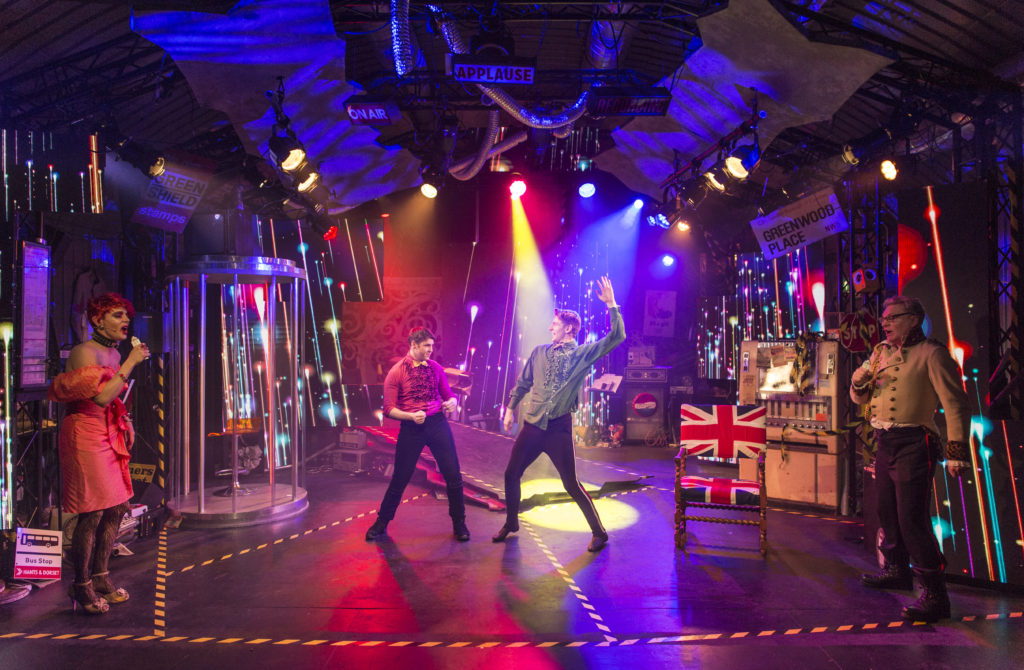 ‘Queereteria TV’ takes us post-apocalypse, as a group of gay men take over a TV station, that was the previous site of gay cruising club, Club Queereteria. It’s a queer comedy complete with music, dance and drag, and is the third in a trilogy of shows that follow Torsten’s journey (played by Andy Bell, Erasure), each accompanied by a concept album.

As we enter Above the Stag’s new and improved auditorium, it is clear that this is a beautiful space. David Shields’ set design compliments it well. Curved screens are used effectively throughout the play, particularly in the second half of the show, where we are placed in a kitchen, in the House of Commons and in an episode of Dragon’s Den. These sketches are also some of the strongest moments of the show, which unfortunately fails to deliver or develop much of a narrative that an audience can emotionally engage in.

The script, written by Barney Ashton-Bullock, is overwritten and overindulgent, and because of this it is frequently inaccessible. It is full of big ideas and aims to explore some vital topics including queer sexuality, fetish, gender conformity, the power of the media, societal pressure and conformity, however they fail to come together. Whilst it might work in a shorter format, a full length play where every other sentence is an innuendo quickly becomes repetitive, as there is no nuance to the humour. Unfortunately as a result, the whole play is one note. The fun and potential within the script could be condensed into an hour and be considerably more entertaining and investigative than the current product.

Ashton-Bullock also appears in the play as Torsten’s lover, Daniel. Unfortunately his acting is no better than his writing, and there is no chemistry between him and Bell. Torsten is consistently wooden and ultimately this feels like a glorified showcase for Bell’s singing. Tom Mann can clearly act but his dancing is sadly out of time, whilst William Spencer, who is also the choreographer, is a competent and stylish dancer, who struggles with his acting. There are certainly issues that director, Robert McWhir, should’ve ironed out to streamline these performances.

On a stronger note, Matthew Baldwin plays Lady Domina Bizarre and brings a fantastic energy to the stage. Baldwin is funny and vivid, and the best performance of the show. Peter Straker also delivers some lovely moments, finding a level of honesty and truth in a play that otherwise loses this in melodrama and overwriting.

This is a musical comedy that needs to be stripped back and developed to make it into something that delivers the potential of its narrative, and entertains with nuance.

Above the Stag until 28th April